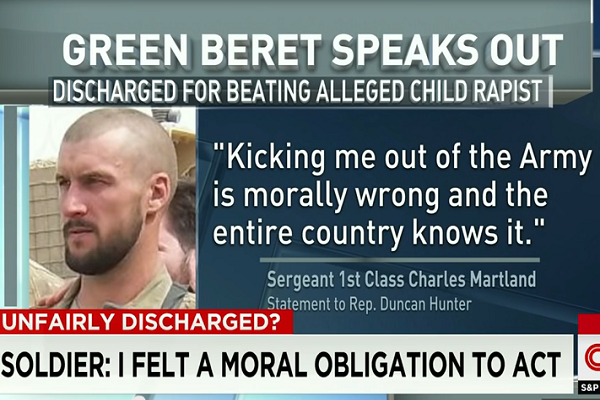 In August of last year, the United States Army was moving to kick out a decorated Green Beret for defending a young boy who had been repeatedly raped by an Afghan police commander.  This Afghan reportedly also beat the young boy’s mother when she complained about the repeated vile sexual attacks on her son.

The U.S. Army is kicking out a decorated Green Beret [Sgt 1st Class Charles Martland] after an 11-year Special Forces career, after he got in trouble for shoving an Afghan police commander accused of raping a boy and beating up his mother when she reported the incident.

. . . .  One day in early September 2011 at their remote outpost, a young Afghan boy and his Afghan-Uzbek mother showed up at camp. The 12-year-old showed the Green Berets where his hands had been tied. A medic took him to a back room for an examination with an interpreter, who told them the boy had been raped by another commander by the name of Abdul Rahman.

After learning of the meeting, Rahman allegedly beat the boy’s mother for reporting the crime. It was at this point, the Green Berets had had enough. Quinn and Martland went to confront Rahman.

“He confessed to the crime and laughed about it, and said it wasn’t a big deal. Even when we patiently explained how serious the charge was, he kept laughing,” Quinn said.

According to reports of the incident, Quinn and Martland shoved Abdul Rahman to the ground. It was the only way to get their point across, according to Quinn. “As a man, as a father of a young boy myself at the time, I felt obliged to step in to prevent further repeat occurrences,” Quinn said.

According to reports, Martland is an outstanding and respected soldier who has earned a Bronze Star with Valor and was praised by name by General Petraeus.

After a deployment to Iraq in 2008, he deployed to Afghanistan in January 2010 as part of a 12-man unit. He and his team found themselves fighting large numbers of Taliban militants in volatile Kunduz Province.

On one mission, one of their vehicles was struck by an IED, setting off a Taliban ambush. Fox News is told Martland rushed to the scene. He jumped in the turret of a damaged Humvee, exposing himself to enemy bullets while returning fire to help his teammates gather sensitive equipment.

“I thought he was gone, then he comes out of nowhere to save us,” said an active-duty Green Beret who requested anonymity.

Martland was awarded a Bronze Star with Valor for his actions. According to one evaluation, he also was “praised” by Gen. David Petraeus, then commander of U.S. and allied forces in Afghanistan.

The Army’s move to remove Martland from service was unfathomable and garnered attention from, among others, two U. S. Congressmen, the VFW, and a famous actor who is a former Marine.

Representative Duncan Hunter (R-CA) and Representative Vern Buchanan (R-FL) pushed for a Capital Hill intervention to ensure that Martland was not removed from service, and Harvey Keitel was sufficiently outraged by the Army’s reaction that he sent an email to Duncan.

The star of such films as “Mean Streets” and “Reservoir Dogs” reached out to the office of Rep. Duncan Hunter, R-Calif., one of Sgt. 1st Class Charles Martland’s most vocal advocates, to go on the record in support of the Green Beret.

A former Marine himself, Keitel said Martland and his team leader deserve a medal – not punishment – for their actions.

“[W]hen I was a young Marine I understood we were present in order to help others who did not have the wherewithal to protect themselves,” Keitel wrote, in an email to Hunter chief of staff Joe Kasper. “Whomever owns the idea that decided to reprimand these two men instead of giving them a medal for their actions should be asked what the hell they would’ve done if it was their child in question …”

The email was shared with FoxNews.com. Kasper said he also spoke by phone with Keitel who affirmed his support.

Fortunately, the Army paid attention to the public outrage and to the House members who defended Martland.

Army Sgt. 1st Class Charles Martland, a Green Beret once selected for involuntary separation from the service after he struck an Afghan police commander who had admitted to raping a child, will remain in uniform.

An Army board on Wednesday determined Martland’s military personnel file contained an “error or injustice,” an Army spokesman said Friday morning. Removing that error from his record means Martland, 33, will continue to serve at least through the end of his enlistment.

The Army got this right . . .  eventually, but its initial move to condemn and punish Martland for his heroic defense of a small child is a stunning indicator of just how infested with wrongheaded progressive thinking our military has become.

Although this case has been resolved properly, the effects of the Army’s initial actions against Martland are likely to have a chilling effect on others in the military who are in a position to intervene in crimes against civilians by people trained and funded by U. S. taxpayers.

Yeeeeup. The whole imbroglio was a terrible injustice, waste of time, and bundle of awful signals to Americans in uniform.

About time this was set right.

Unfortunately it will still mean the basic end of his career, they will see that he never receives another promotion or “choice” assignment.

A-yup. The over-arching message to boots-on-the-ground American service members is this: “We’ll have the Afghan officers’ backs — no matter what they do, or to whom — before we have yours.”

That’s a recipe for a weak military structure, which no doubt is part of 0bama’s “fundamental transformation”.

It really isn’t set right. While it may not appear anywhere on his official record, his actions, particularly making the brass look bad, will severely limit his future options.

You got that right. He’ll never see another promotion and will be subtly eased on out.

His career is over.

The problem here was the action that SFC Martland and Quinn took. Though the actions of the Afghan police commander were both vile and morally reprehensible, the SF members had no authority to assault the Afghan police commander. They should have been able to come up with some other means of protecting the young boy and his mother, which would not have placed the American Military command in the position that it did. Our troops are essentially guests in that country.

Now, Martland should not have been discharged, nor should he be subjected to official penalty which could affect his rights upon discharge. But, I am fairly certain that his tenure in SF is over and that he will not be able to reenlist upon the completion of his current enlistment period.

He should have been given another medal for defending the unfortunate.

And we should be ashamed we have an “Army” that would even attempt punishing a man of this caliber.

Unfortunate that is what you get when your commander n chief believes that officer should be chosen for they political beliefs not their actually skill as a leader and/or warrior.

“The problem here was the action that SFC Martland and Quinn took.”

I agree and disagree. First the order to ignore the rapists activities was obviously an unethical and immoral order that from what I have read was in direct violation of the UCMJ. Therefore both men as soldiers were bound to take action and to disobey that unethical and immoral order or they become a party to the illegal order. So I disagree that they should not have taken action.

I do agree that their action was rash and and probably not handled in the best way. They should have just arranged this guy for a “training accident” or he should have been “tragically caught in a IED”, been the victim of a “lone enemy snipe” or just quietly disappeared. Sure everyone would know who did it, but these 2 men are more than well trained enough to not leave behind any evidence.

Then the Army could have “discovered” his personal little love squad and been appropriately appalled. They let their anger get the better of them. Because in the end the Afghan commander got a beating but won’t change and will just continue his rapist ways.

My God, the army should be so ashamed of itself. Make that the entire Dept. of Defense.

The fact that the Fort Hood terrorist hasn’t set before a firing squad, was bad enough.

The personnel involved in that involuntary separation of SFC Martland need “reeducation”, “recalibration”, “reorientation” “adjustment”, or whatever euphemism you choose to describe the fundamental change in the decision processes that needs to happen. This must not happen again.

I vote for a grenade up the bum on 8 second timers.

Obviously what the Afghan commander did was disgusting and what the Army almost did was reprehensible. However, if I heard about someone laughing when being told about a serious problem that they need to fix or else, my first question would be where are they from.

In my experience people from some Asian and/or reputation (“face-saving”) cultures aren’t used to that kind of direct language and will get uncomfortable and laugh about the situation and try to minimize it, which can infuriate the person with the complaint as they feel the other person isn’t taking it seriously. So I can certainly understand how the conversation went the way it did when the soldier thought his complaints were being ridiculed by the Afghan commander.

Again, I’m not excusing anything the army did – this should have been a ten minute conversation with his CO telling him what he did right and wrong in the situation, and from that point the army should have shifted its efforts to protecting the child and other children like him from predators in the Afghan army rather than trying to kick out one of its best.

If a U.S. Army Officer and Commander lets his “cultural” leanings influence his duty then he is unfit for command. His “cultural” leanings are irrelevant to the UCMJ and the officers that followed the immoral and unethical order to ignore the behavior should be before a Board of Inquiry at minimum and most likely an General Court Martial.

I was just following orders is no defense for allowing such evil.