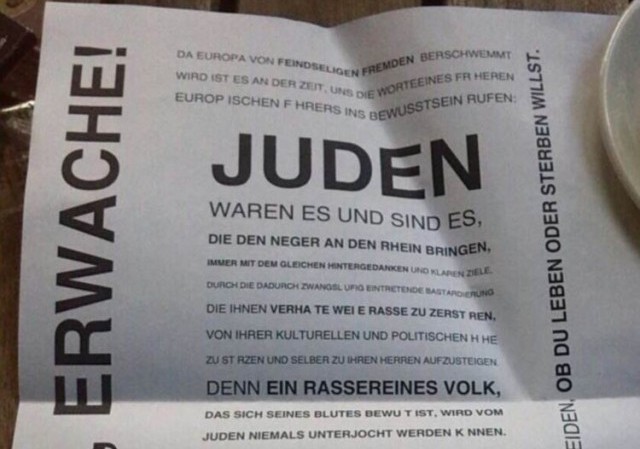 Right in time for Passover as tiny Jewish student communities across Germany were preparing for the Jewish holiday, several University campuses all over the country were hit by a major anti-Semitic cyber-attack.

The Spokesperson of Jewish Society at the University of Bonn says, “​Just imagine sitting in your university and suddenly, dozens of anti-Semitic fliers with hate speech fly out of the printer next to you. Your university has usually been a safe place but now you face death threats against you, your family, and your friends, and you can’t do anything to stop the attack. On top of that, you find out that your school was one of several in the country that was targeted.” Bonn-based German newspaper General Anzeiger reports:

Universities across German have been hit by a cyber attack. Many colleges confirmed that their network printers and photo-copy machines had been spontaneously printing racist and anti-Semitic flyers, out of nowhere. According to reports the affected academic institution include Universities in Hamburg, Bonn, Münster, Lüneburg, Bremen, Tübingen und Erlangen-Nürnberg. (…) Meanwhile, the security breach has reportedly been closed. [Authors translation] 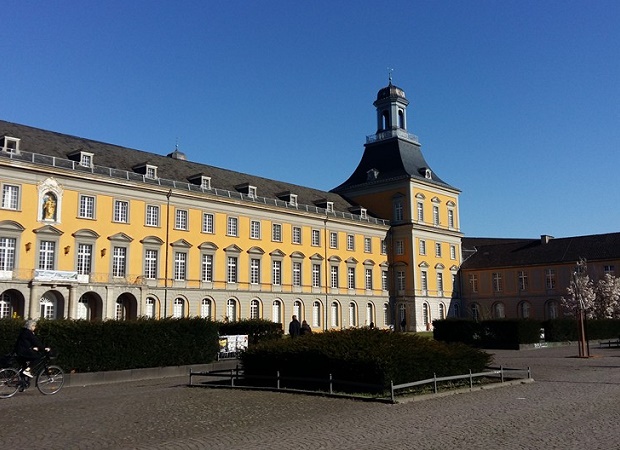 The student representative at the University of Bonn maintains that this attack is in “no way representative of the actual situation at German universities. We are happy to welcome Jewish students and researchers to Bonn, as well as to greater Germany, regardless of their nationality, where they can study in an open, tolerant, and safe environment.”

University and the city of Bonn have been turning into a hub for anti-Israel activism in recent years. In March 2016, the local chapter of anti-Israel boycott movement (BDS) conducted an “inspection” of the city’s largest department store searching for products made in Israel. The activists wore white lab coats marked “BDS inspection” as they roamed around the mall meticulously checking each shelves for Israeli products. The group has vowed to carry out such inspections in future as well.

The source of last week’s nationwide cyber attack has not yet been established, however the copy of a flyer obtained by Legal Insurrection apparently has a reference to an American Neo-Nazi website — printed vertically on the side. The German language flyer contains a quotation from Hitler’s Mein Kampf and accuses Jews of engineering the European Migrant Crisis.

One of the #antisemitic flyers circulated at German Universities after coordinated cyber attack#antisemitism pic.twitter.com/ys24vfM1nJ

When Hitler rose to power in 1933, roughly half a million Jews lived in the Germany. During the Holocaust Nazi Germany murdered six million Jews, including 165,ooo German Jews. Today, roughly 100,000 Jews reside in Germany. The Jewish population in Germany has been gradually aging. However, the Jewish student community in German campuses has flourished in recent year owing partially to many Jewish-American students opting to study in Germany.

The spokesman of Jewish students in Bonn urged the authorities to “close the loophole in our system in order to ensure that such an attack is no longer possible and to pursue the prosecution of whoever is responsible.”

The college campuses affected by the cyber attack include Bonn, Hamburg, Nuremberg, Bremen, Münter and Tübingen.

[Author is an analyst based in Bonn, Germany]

Horrible; I hope German authorities take this as a top priority (for a variety of reasons) and bring these miscreants to justice soon.

This type of attack has happened before, in the US, I think. The mechanism is simply to get on the university web site, and print. It should be well within the scope of anybody who can use google. Oh, look! here it is on uTube, from a search “how to hack a printer.”

There is lots more where this came from, much of it perfectly legitimate. We all want to print.

Once you are on a network, it is easy. To get on a university network, all you have to do is get a student to tell you how. If that is what happened, a good network will be set up to readily disclose whose account was used.

The first bust is likely to be a totally innocent person, who, upon contemplation, can figure out who swiped the their code.

Basically college printer banks often have open wifi systems so it’s just a matter of finding the printer and telling it to print.

printers and photo copy machines on college campuses across Germany

Printers; no trick to that.

No magic there.
Most copiers today are actually multi-function devices that can be also used to print and scan over the network.

spontaneously printing racist and anti-Semitic flyers, out of nowhere.

Yeah, that’s not how it works.

The stupidity of going through all the steps and planning of doing something so stupid is just breathtaking.

Worse than hate is stupid hate.

It’s been said before but it bears repeating: the Germans will never forgive the Jews for what the Jews did to them in WWII…

Perhaps Weev updated his copy or someone felt inspired by it?

Admins should firewall their networks.