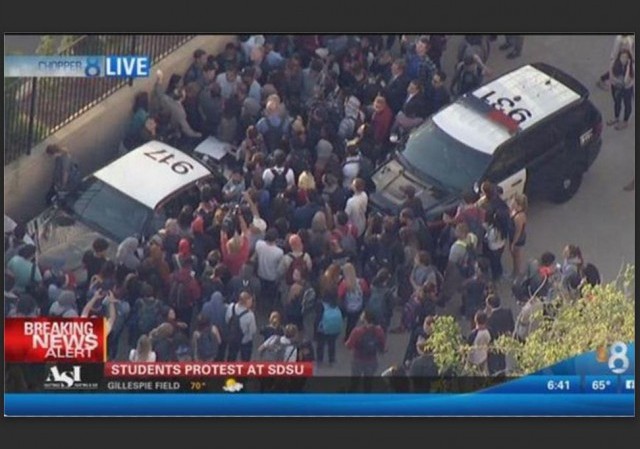 Perhaps his most famous moment was when he got an anti-Israel student at UC-San Diego to admit she supports extermination of Jews (watch to the end):

Horowitz’s Freedom Center has been posting provocative posters at various campuses. In February the posters showed SJP as Hamas executioners, because so many SJP members express support for the bloody Intifadas and back “the resistance” (which is what Hamas means in Arabic).

This month, the Horowitz Center issued posters identifying specific anti-Israel student activists alleging they have “allied themselves with Palestinian terrorists.” 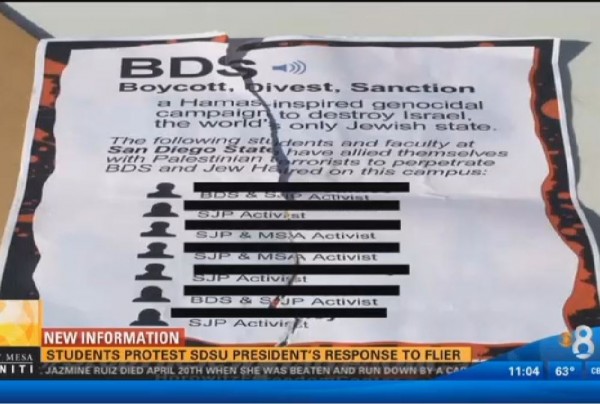 That has upset a lot of anti-Israel activist groups which have claimed the posters are “Islamophobic.” The tactic even is questioned by some pro-Israel groups as counterproductive. Horowitz is unapologetic for the poster campaign.

At San Diego State University (SDSU), the controversy led to a statement by the university president mildly criticizing the posters but reaffirming freedom of speech.

That reaction led about 150 student protesters from the Muslim Students Association to confront the president and trap him in a police car for an hour. To prove they are not “terrorists.”

San Diego State University students voiced their anger towards the university’s president after posters began circulating around campus with names of students with alleged connections to terrorist groups.

It all began on the third floor of the Student Union where protesters knew the president would be, so they waited for him. They followed him down the stairs and out the door, where he ended up inside a police car for more than an hour.

According to students, they had tried to speak with the president, Elliott Hirshman, for days without any success.

When students confronted San Diego State University’s president on Wednesday, they would not let him leave until they were heard.

The local Fox affliate had more video of the protest:

The siege ended when the president apologized for not more forcefully responding to the posters. Which, of course, makes it more likely that false imprisonment will be used again in the future to extract concessions, because it worked this time.

A taste of Europe to come.

Name them. We all know that terrorists have been hiding out in colleges for decades.

The school should use its code of conduct to render discipline, but likely won’t.

Colleges have are reaping what they have sewed.

“…he got an anti-Israel student at UC-San Diego to admit she supports extermination of Jews.”

He should have extended the question. Does ‘Jew’ include women, gays and blacks who are Jews?

What’s so cool and edgy about a group that supports hate speech, misogyny, homophobia and racism?

Reveal BDS in that context and the larger student population will never see Melisandre the same again.

He had a big SUV. He should have put it in 4WD and run over the student scum.