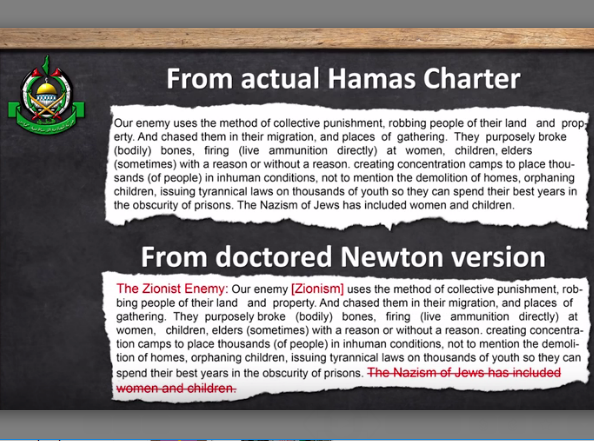 While anti-Israel propaganda is common on college and university campuses, there appears to be a filtering down to the public education system.

We already have seen attempts to proselytize students into becoming “freedom fighters for Palestine” at an Ithaca, NY, third grade class.  Now the Newton (MA) Public Schools are embroiled in controversy over anti-Israel bias in the public high schools.

Last week, Americans for Peace and Tolerance (APT) released a video about the years-long controversy over Newton South High School’s curriculum for teaching about the Middle-East.  The issue first arose in 2011:

The section, of the third of five pages, reads as follows: “Over the past four decades, women have been active in the Palestinian resistance movement. Several hundred have been imprisoned, tortured, and killed by Israeli occupation forces since the latest uprising, “Intifada,” in the Israeli occupied territories.”

In June, 2014, Newton Schools administrators claimed the offending textbook had been pulled during the 2011-12 academic year, but APT found evidence that it was still in use in some capacity in the 2012-13 year.  The Jewish Community Relations Council (JCRC) and Anti-Defamation League (ADL) rejected APT’s accusations, creating a lasting rift with APT and APT Founder and President Dr. Charles Jacobs.*

Later in 2014, the non-profit Verity Educate released a report on the broader issue of “Middle East Curricula in Newton Public Schools” and confirmed that those materials were still being used.  In addition, Verity Educate’s Executive Summary notes:

There has been a demonstrated lack of subject matter expertise in the creation and oversight of these Middle East curricula, and the vast majority of materials used do not originate from authoritative sources or are so altered as to have lost their authority.

Dr. Ellen R. Wald, executive director of Verity Educate, said her organization approached Newton Public Schools three times about discussing the report before its release, but never received a response. Newton Superintendent of Schools David Fleishman, and School Committee Chair Matt Hills, as well as Newton Mayor Setti Warren, all did not respond to JNS.org requests for comment on the report.

“It actually was an anomaly,” Wald told JNS.org regarding the Newton school district’s non-response to the report. “In other instances, we’ve not only received responses [from school districts], but have found that school districts were very interested in what we had to say and have responded not just cordially, but in many instances positively.”

Americans for Peace and Tolerance Video

Last week APT released a video that follows up on those themes, hitting the City for implicitly defending a curriculum that whitewashes Palestinian anti-Semitism and teaches Muslim Brotherhood ideology.

According to a press release from APT, the video shows:

We may be witnessing a broadening of the anti-Israel propaganda effort. What once was common only on college and university campuses now appears to be working its way into public high schools and elementary schools. This should be a cause for concern among supporters of Israel.

Does Israel know that she has many loving friends in the States? That we are horrified by what is happening in this soiled culture? Negative stories about Israel and the Jewish people are beyond upsetting. Civilization as we know it can only be traced back to Abraham and Isaac, no matter how secularists want to deny or ignore the lineage.

Excellent Post and superb video. Supporters of Israel must be vigilant about not losing control of local school boards to these jackals.

Actually, parents must be vigilant about not losing control of their children’s education to a government monopoly bureaucracy. The problem is not the school boards, it’s the parents.

What parent with a brain tolerates this?

Maybe we should be happy they’re learning to read? “Antisemitic” has five syllables and is pronounced: “an-ti-zi-on-ist.” But, five is a big number to count on one hand. Let’s start with one finger. Ok class, everyone point at one country.