Show me the way to Cheese Mountain 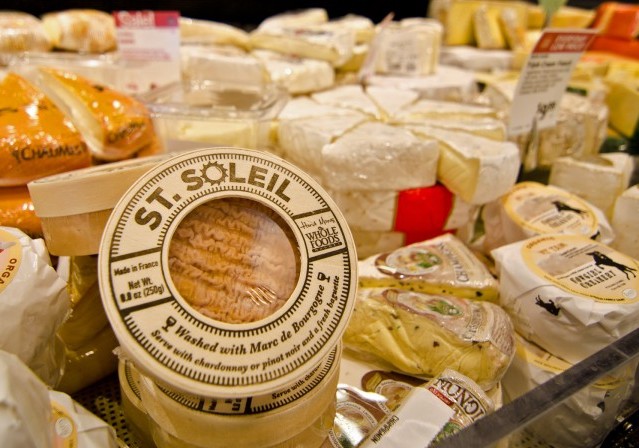 I LOVE cheese. ALL the cheese.

So I was thrilled to learn America has a Cheese Mountain. Well, kind of.

It turns out, America has been stockpiling cheese and butter and has amassed more golden treats than any time in past thirty years. Why? Europeans, trade, and because cheese is delicious.

Whitney McFerron of Bloomberg News has the breakdown:

Exports from the European Union have climbed so far this year and last — even after the bloc’s once-largest customer, Russia, banned trade in retaliation for sanctions over its incursion in Ukraine. A glut of milk, plunging prices and a weakening euro mean the EU has been able to grab customers in Asia and the Middle East, while U.S. sales have fallen.

European dairy products are so cheap right now that the U.S. itself has become the new No. 1 customer for some products — imports of EU butter doubled last year and rose 17 percent for cheese, according to the European Commission. All that excess supply is building up in U.S. refrigerators, especially as American dairy production heads to a record this year.

USDA statistics show cheese inventories at the end of March were the highest for the date since 1984, the year Prince’s “Purple Rain” was released. More than half of the supply is American cheese, while Swiss accounts for about 2 percent, and the rest the government classifies as “other.” 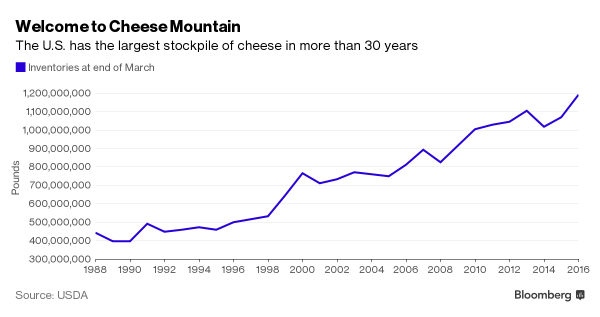 Update: A Fromage Fort to call your own

Grant Bosse, Editorial Page Editor of the New Hampshire Union Leader and Sunday News made a marvelous suggestion that was too good not to share:

Build your very own cheese mountain: 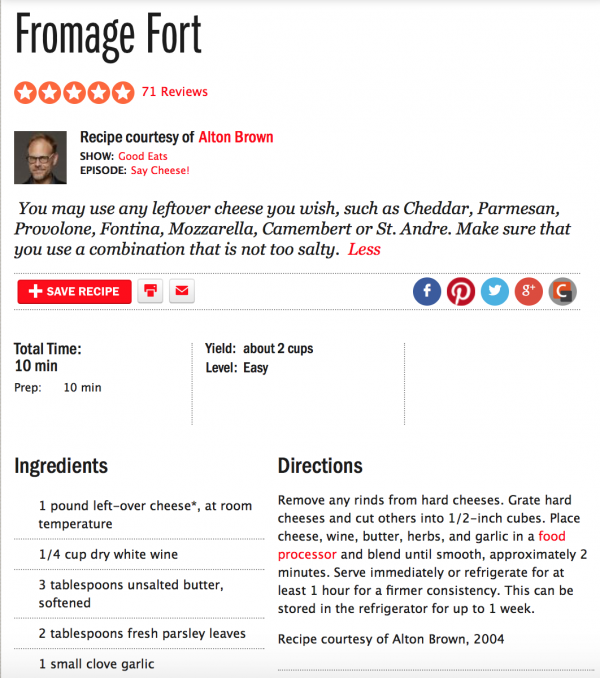 I can appreciate your attitude towards cheese.

I am still having Wisconsin cheese sent to me in Massachusetts twice a year. They won’t ship May thru September, but all of the cheese for holiday cooking is from Wisconsin.

I live in Wisconsin, AKA Cheese Mountain! I love cheese! My first real job was in a cheese factory.

Actually, follow the money trial. It’s the government that is doing this to appease the Dairy farmers by keeping the prices artificially high. The government is picking winners again which is very wicked and hurts the consumer (us).

I bet I know what made your fingers so fat…eating too much cheese!

Sorry, guys. My fault. I went shopping yesterday for the ingredients for my five-cheese penne. 🙂

Ahhh … an accumulating “stockpile” means that the cheese is stacking up in inventory faster than it’s selling.

In the industries with which I happen to be familiar, this is not considered to be a good thing.

Why does this remind me of Charlie The Unicorn goes to Candy Mountain ?

I guess since ARAmark and Sedexo took over so many school cafeterias, the USDA doesn’t give away as much cheese.

Everyone should buy hard cheese and shred it.
Make America grate again!!

Don’t know if it’s still the case, but Kraft’s biggest competitor in the sliced American cheese marker used to be the government, which gave away what Kraft was selling.

Is this where I can make a cheesy comments?

I Cheddar to think who will do this, but I Camembert the thought of what will be on the table if I say nothing. I feel like such a Muenster, really I do. I Swiss my arguments didn’t have such gaping holes in them.

I gouda whey my options, but, er, If I wheel play my curds right, I could stock up and I colby rolling in cheddar, Jack!

I will have to try this. I <3 bleu cheese. Thanks for the tip!

It’s an election year. We need the cheese to go with all of the whine!

What a *PERFECT* opportunity for a truly conservative politician “to root out waste in government and make the best possible use of our nation’s resources.”

(The above quote links to President Ronald Reagan’s “Statement About Distribution of the Cheese Inventory of the Commodity Credit Corporation” dated December 22, 1981. You know, it’s not like we’ve never seen this movie before.)

On second thought, it is like we’ve never seen this movie before.

“Those who do not learn history are doomed to repeat it.” — [most likely] George Santanyana