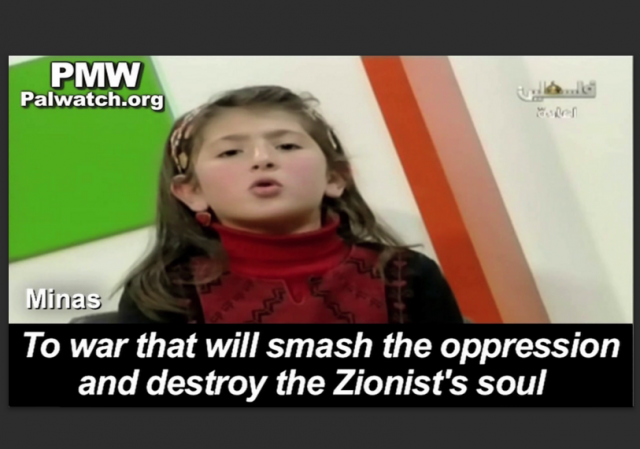 Palestinian Media Watch is an indispensible resource for monitoring and documenting incitement on official Palestinian Authority and Hamas television.

We often embed and link to its YouTube postings of Palestinian TV broadcasts. Because they are fluent in Arabic, they perform the function not only of pulling the video but also providing English language translation in the video captions.

Pal Media Watch thus documents the two-sided statements of Palestinian leaders like Mahmoud Abbas, who preach peace to Westerners, but hate and violence to their own people.

There have been prior occasions when Pal Media Watch (and MEMRI, another organization that performs a similar function) have had accounts or videos suspended or threatened for violating the YouTube Terms of Service banning “hate speech.”

That works a complete perversion of the intent of the Terms of Service, because Pal Media Watch doesn’t engage in hate speech, it documents it.

Here is what the page shows now.

Following Palestinian Media Watch‘s release of a video on Thursday in which a Palestinian girl read a poem on official PA TV calling for “war that will smash the oppressor and destroy the Zionist’s soul,” YouTube “terminated” PMW’s account for violating their “terms of service,” which includes hate speech. The terminated account, https://www.youtube.com/user/palwatch/, contains nearly all of PMW’s videos.

We urge anyone with contacts at Google or YouTube to contact them and request that PMW’s account be reinstated. Others can send a message to YouTube by clicking the “Send feedback” link at the bottom of YouTube’s homepage.

It is outrageous that YouTube closed PMW’s account, which is a blow to the war on terror. This is particularly dangerous now while Israel is fighting a war against Palestinian terror. PMW documentation on PMW’s YouTube account shows the PA and Fatah leaders’ support and promotion of the terror.

PMW’s exposure of Palestinian incitement and hate speech is recognized and used by parliaments and governments around the world. On Friday, a 25-minute debate took place in Swedish Parliament in which the PA’s support for the current terror was discussed, and the proof was based entirely on PMW documentation – most of which is no longer accessible on PMW’s YouTube account.

PMW is urging YouTube to immediately reinstate PMW’s account and all PMW videos, and is calling to our subscribers to help put pressure on Google.

Here is a snapshot saved on Internet Archive on Feburary 6, 2016. Look at the titles, and you will understand the damage YouTube has done to the cause of documenting Palestinian incitement: 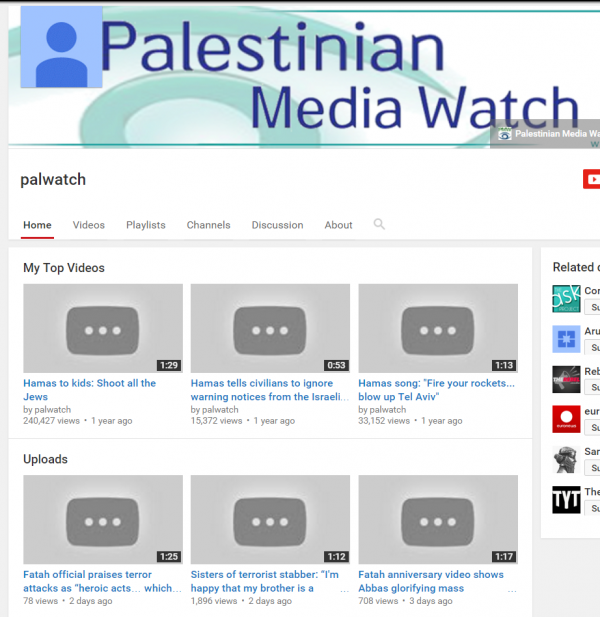 Here are some more entries with the covering image captured in Internet Archive, that now are gone: 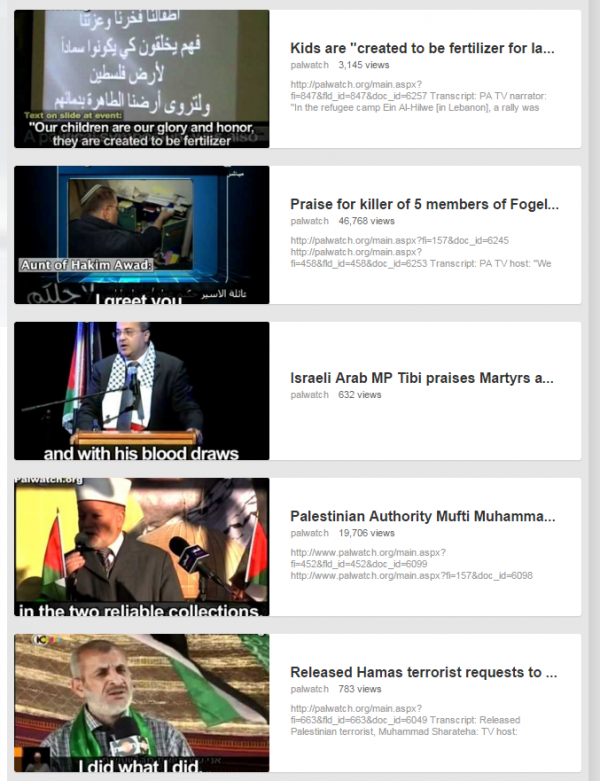 When you go to a specific video, this is what you get: 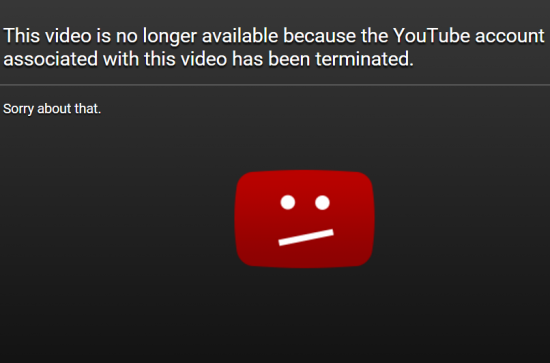 I emailed Itamar Marcus, who runs Pal Media Watch, and he told me that there was no copyright issue, and that is was clear that YouTube was invoking the “hate speech” term of service because it had happened to individual videos in the past:

A few months ago they closed a few of our videos for “hate speech”. Of course it was PA hate speech that we exposed. The last video we released was this one: http://palwatch.org/main.aspx?fi=157&doc_id=17437

A clear example of hate speech again from the mouth of a child.

We assume PA sympathizers are complaining and You Tube does not bother to realize that we are exposing and not promoting.

[That other account was] an old PMW account. In recent years we have been using an account with the name of our website palwatch – https://www.youtube.com/user/palwatch/ – so it would be uniform. All the PA hate and terror promotion of the recent years including this current terror is on that site. Also our website links to this account so that our video sectoin of the web site is not completely down. Of course we have the original material but if this is not resolved it will take months to upload everything that was destroyed.

You Tube does not offer any access to them neither by email or phone. Only the general feedback on their home page. We did not even get a notification. Just found it was “terminated” when we started to work this morning.

This really is insanity. YouTube’s move, if not reversed, actually aids in the perpetuation of incitement against Jews by allowing the culprits to remain hidden from Western view.

UPDATE: As of 10 p.m. Eastern, the PalMedia Channel is back up! There were a lot of tweets to YouTube, so maybe it had an effect. 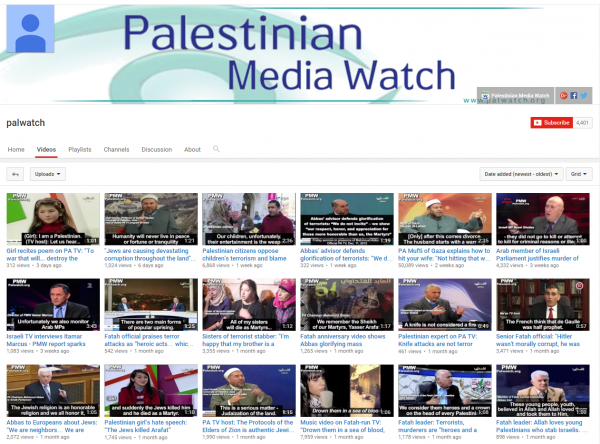 I wish I believed that was the root of their problem.

YouTube’s move, if not reversed, actually aids in the perpetuation of incitement against Jews by allowing the culprits to remain hidden from Western view.

I have little doubt that this is their actual intent.

Anyone want to wager these same Pali videos are on YT somewhere, in Arabic, and YT has no problem with it?

I believe that is what they call a “sucker bet”

They can tell the difference, that’s why the Antisemitic and anti-Israel vids are rarely taken down. youtube bows to pressure from terrorist sponsors, Facebook’s senior Mod is married to an Islamist that’s a member of a terrorist funding NGO.

youtube allows the fraudulent vids posted by the various pro”Palestine” groups to remain.

Feedback sent, for all the good it will do.

Clinton should be asked to come forward and help.

Back in 2007 as a senator she teamed with PMW over child abuse by Palestinian incitement.

That was when she neeeded the votes and support of New York’s Jews. The moment she no longer needed that she went back to her old positions, and those of her Jewish antisemite BFF Sid Blumenthal.

The PA has been using children’s programming in TV for years to promote hatred and anti-Semitism. A dozen years ago I watched a Muppet-like program full of it. Google-YouTube-has become a hideous organization. It is deeply embedded our lives and the lives of virtually everyone on the planet by virtue of the internet. Difficult as it is, alternatives to it should be found and used when possible.

Liberal thoughtcrime censors are getting more and more bold.

First we had the so-called ‘Trust and Safety Council’ on Twitter whose sole purpose seems to be banning conservative critics of their members.

Now we have this laughable BS.

Liberals cannot win a debate. So they silence the opposition and have one-way rants about evil Israel and the poor oppressed Palestinians that just want to be free.

Please let us know when it happens again.

It was never gone. What you showed us was a video that was blocked for copyright infringement. If the account were taken down, there would have been no …/user/palwatch page to post comments to.

For all I know, there are still blocked videos on the account, I do not have the time to check each one.

Did you not see the “The account has been terminated…” message? Terminated means “gone”. YouTube, probably due to a great many messages pointing out what they were doing, has since restored it.