. . . after CBS News uncovered wasteful spending in the organization 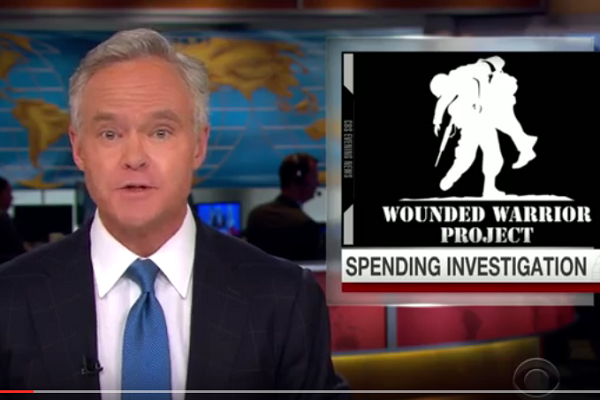 A CBSNews investigation uncovered worrying patterns of spending donations by the Wounded Warrior Project, a charity that helps veterans wounded while serving their country.

According to the initial CBS report, Wounded Warrior Project spends only about 60% of its donations on veterans.  Compared to the 91% Fischer House spends on veterans and the 96% spent by the Disabled American Veterans Charitable Service Trust this is a shockingly low percentage of donations used for things other than the stated goals of the charity.

In light of the CBSNews investigation and the subsequent publicity and internal investigation, Wounded Warrior Project has fired both its CEO, Steven Nardizzi, and its COO, Al Giordano.

CBS’s initial investigation uncovered shocking increases in spending on “team building” staff meetings as five-star resorts and extravagance on “big parties” after Nardizzi came on board in 2009.

Former employees say spending has skyrocketed since Steven Nardizzi took over as CEO in 2009. Many point to the 2014 annual meeting at a luxury resort in Colorado Springs as typical of his style.

About 500 staff members attended the four-day conference in Colorado. The price tag? About $3 million.

Army Staff Sergeant Erick Millette is one of the whistleblowers who came forward about his concerns about the Wounded Warrior Project and the way that donations intended for wounded veterans was being funneled instead into areas that amount, another former employee says, to “fraud, waste, and abuse.”

“Their mission is to honor and empower wounded warriors, but what the public doesn’t see is how they spend their money,” said Army Staff Sergeant Erick Millette.

Millette came home from Iraq in 2006 with a bronze star and a purple heart — along with a traumatic brain injury and PTSD.

Initially, he admired the charity’s work, and participated in its programs. He took a job as a public speaker with Wounded Warrior Project in 2013. But after two years, he quit.

“You’re using our injuries, our darkest days, our hardships, to make money. So you can have these big parties,” he told CBS News.

. . . . “It was extremely extravagant. Dinners and alcohol, and just total accessm” one employee explained. He continued, saying that for a charitable organization that’s serving veterans, the spending on resorts and alcohol is “what the military calls fraud waste and abuse.”

This report was met with outrage among veterans and those who donated to the charity.

This past Thursday, Wounded Warrior Project fired two executives and promise reorganization and oversight to correct the problems within the charity.

The two top executives of Wounded Warrior Project were fired Thursday by the board of directors.

I have seen complaints that Wounded Warrior Project often gives little substantial help–veterans complained of getting a box of swag but no help with their actual problems.

lol, it’s simple, Tom, if you add “ism” to anything, it’s automatically approved by the SJW.

The problems have been in place for years. Nothing will change until they get a new Board of Directors. The current Board is either AWOL or incompetent. The Board’s job is oversight yet they provided blindness. I am waiting to see the Board resignations.

Darn it, hit “thumbs down” by accident. Sorry about that. Terrible design, that feature.

Yes – I hope its possible to move ‘Reply’ away from the thumbs down.

I had no idea this was going on. We’ve given plenty to WW. Stories like this will cause people not to donate.

This makes my blood boil. Every last board member and officer should be run out of town on a rail, the bastards’ names shouted from every blog and rooftop in the nation as the most shameful of us all, sued civilly and NEVER hired by any company for so much as toilet scrubber again. Let THEM learn what homeless, forsaken and destitute feels like.

I haven’t watched O’Reilly in several years, but I wonder what he will say about this. He’s given a TON of cash from the sale of his stuff and books.

God, I could just scream.

Haven’t considered donating to them since they outed themselves as anti-gun a few years ago.

I’ve been criticizing this outfit for years. Their filings are public record.

This is not limited to WWP. There is a growing movement in this country where charities are being taken over by greedy executives who create a nice little game for themselves. They run around hawking the good works they do in exchange for increased contributions. All their ‘hard work’ is rewarded by increased compensation packages.

Does anyone remember the good work done by Goodwill Industries? I remember getting a tour of their facility in Winston-Salem, NC, back in the sixties. They were hands on teaching the blind how to earn a living. Something has changed. Goodwill has opened four retail operations in the Raleigh, NC area. They collect donations and sell clothing at these locations. But the locations are located in prime commercial real estate areas and are constructed in the same architecture as their “competitors” in the area.

I don’t like it. Something just does not add up. To me, I see some empire building on the part of some Goodwill execs to increase the contribution bottom line.

This is after 2+ years of veteran sites reporting that the WWP has not been on the up and up.

I used to donate to WWP until I saw their expense ratios. There are other orgs that do good work.

To blame this WW failure on “Free Market Private Enterprise” is stunningly ignorant as well as delusional.It is the Democrats that are in bed with Wall Street and Crony Socialism.