What if fairy tale characters were armed?

What if fairy tale characters were armed? 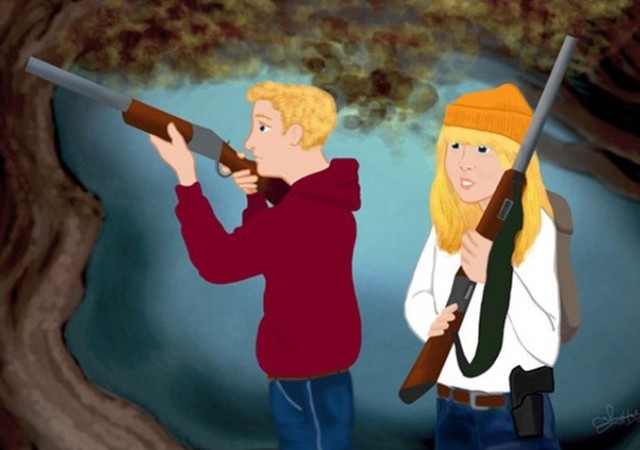 Amelia Hamilton is a blogger and author of the Growing Patriots children’s books. A lifelong writer and patriot, she also loves hockey, old cars, old movies and apple juice. Amelia has a master’s degree in both English and 18th-century history from the University of St. Andrews in Scotland. Her dog Virgil is her co-pilot.

With two books under her belt in the Growing Patriots series, Hamilton’s latest project has encouraged the wrath of just about every left-leaning media outlet on the internet. Taking our favorite fairy tales, Hamilton is reimagining these well-loved stories with one tiny little change — the would-be victims are armed.

Her first installment, Little Red Riding Hood (Has a Gun), was published on NRA Family mid-January. Last week her latest, Hansel and Gretel (Have Guns), hit the internet. They’re great reads and highly recommended (if I do say so myself).

First, a little about you:

LI: Show us on your hand what part of Michigan you’re from.

A: Mayonnaise is like slimy, tangible evil. Mayonnaise is as though the lies of a thousand politicians turned into a condiment and the world believed it was delicious. I hate mayonnaise like I hate socialism, which is probably at the root of mayonnaise. Wake up, sheeple!!1!

LI: What inspired you to write your first children’s book?

A: I wrote the first children’s book for a friend’s son when he was learning to count, because I wanted him to have something that would also provide a patriotic foundation. I think it’s important for kids to grow up knowing American history and the values on which our country was founded.

A: Pie, for the obvious reason that it is better.

Let’s chat about your latest project:

LI: How did you come up with idea to rewrite fairy tales with armed citizens?

A: A friend of mine posted something silly about Little Red Riding Hood, and I realized that, if she and her grandmother had been able to protect themselves, all of the violence in the original story (and there is a lot of violence) could have been avoided. It got me thinking, and it turns out that applies to a lot of fairy tales.

LI: Tell us about the response you’ve received from both right and left.

A: Pretty much what you’d expect, but I’d also like to add that there’s a fairly clear breakdown of positive feedback from those who have read the stories and negative feedback from those who have not. The positive reactions have been appreciation for non-violent fairy tales, stories that emphasize safety and show characters who are able to protect themselves rather than being victims, female empowerment, and show hunting in a positive light. The negative reactions have mostly been knee-jerk reactions and made it abundantly clear that these esteemed critics didn’t bother to read the stories before judging them. It’s easy to tell, because the anger is directed towards things that never happened, such as the wolf or the witch getting shot (spoiler alert: neither does) or because they’re too violent for kids (when these stories remove all of the violence from incredibly violent source material).

LI: Hater’s gonna hate, but how hateful are the haters?

A: They’re so hateful, but I just shake it off. As I mentioned previously, those with negative reactions to the stories, by and large, haven’t read the stories. It’s fairly easy to ignore criticism that in no way applies to reality (even when it’s in ALL CAPS).

LI: Your versions are thus far, substantially less violent than the original gory tales, yet progressives are losing their minds because GUNS! Does the insanity make you laugh or cry?

A: I try to be a happy warrior, but it can get frustrating at times. I wish we lived in a world where people would actually, you know, read the stories before deciding what’s in them, but people see the anything about a gun and react without becoming informed. Stories like mine should help people to see that guns are not scary monsters, but the “haters” have already made up their minds based on misinformation. I do screenshot some of the more entertaining tweets that are wildly off base.

LI: Where can our studious readers find your work?

A: Visit ameliahamilton.com for my home on the interwebs (including a link for my children’s books), and nrafamily.org for the fairy tales! Follow me on twitter @ameliahammy and Facebook.com/ameliahammy

Oh, I heard Little Red Riding Hood (With a gun) a long time ago, as a joke, but it was definitely not a children’s story.

If you want to have some fun, tell a new ager that all that stuff about yoga, meditation and Harmonizing with the Infinite boils down to prayer. (An actual yogi would probably agree with you.)

Why aren’t the wolf and the witch killed? They are in the original stories. The original stories are cautionary tales, warning kids what might happen if they misbehave, but in the end justice is done, if belatedly. These cleaned-up versions seem to be just like the PC versions we saw in the ’70s, but with added pandering to the 2A crowd. We can only hope that as soon as the huntsman went off-stage with the wolf he knew what to do, and the same with the villagers and the witch.

In Walt Disney’s version of the Ant and the Grasshopper, (you can watch on YouTube, it’s 10ish minutes long) it’s basically the same story but the queen and takes pity on the grasshopper who doesn’t even repent for not working,

Same story, but the grasshoppers who grew up with the Walt Disney version ended up voting for politicians who told them the ants would pay for their hedonism their entire life.

Being armed is a good way to live happily ever after.

In Goldilocks and the Three Bears, who has the guns?

The 2nd Amendment guarantees the right to arm bears…

Isn’t it Glocks and the Three Bears?

One of the Intolerable Acts was the British requirement that the Colonials had to wear long sleeve shirts.