Welcome to the Cuban economy

Welcome to the Cuban economy

A long road ahead 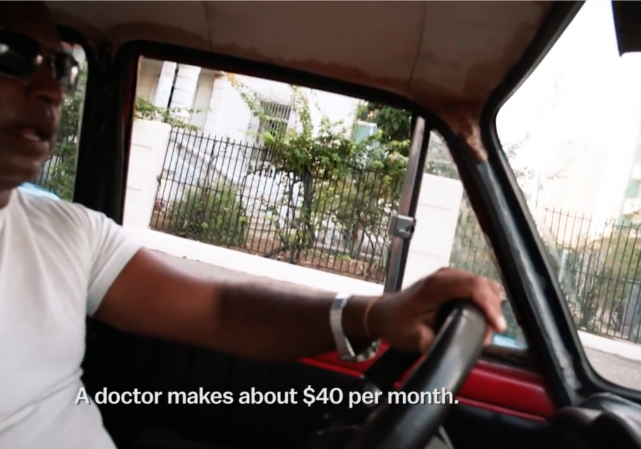 President Obama’s visit to Cuba hurled our hostile little neighbor into the headlines.

Unfortunate (or fitting) photo-ops aside (though they should be enjoyed briefly), how about a little real talk on the state of Cuba’s economy?

A few months ago, a Vox reporter visited Cuba. Their findings were similar to exposés of most statist run countries. Highly skilled, well educated individuals like doctors, engineers, and nurses forsake their professions to work in restaurants, drive cabs, and participate in various other “illicit” employment that pays better.

Though economic conditions have improved ever so slightly since Raul (Fidel’s brother) has been in charge, serious investors are hesitant to put skin in Cuba’s game:

Many of the U.S. executives who have taken a look at the island amid the first steps toward normalization between the two Cold War foes intend to sit on their hands for now, according to a survey of 437 business executives recently conducted by the U.S.-Cuba Trade and Economic Council, which advocates an end to the embargo.

“It’s not only the bureaucracy. It’s the Cuban government’s view of its economic, social and political system,” said John Kavulich, the president of the New York-based advocacy group. “The Cubans are less than enthusiastic.”

Cuban officials say they hope to attract some $2 billion annually in foreign investment in coming years. They are currently seeking bids on nearly 250 projects valued $9 billion in areas including hotels, marinas and golf courses, along with biotechnology, pharmaceutical and bottle factories.

Starwood Hotels and Resorts Worldwide Inc. on Saturday said it had landed a multimillion-dollar deal to manage two upscale Havana hotels and signed a letter of intent to assume management of a third.

Starwood, whose brands include the Westin, W, and Sheraton chains, is the first U.S. hotel company to enter the Cuban market since the 1959 Revolution. The deal fits Cuban officials’ stated desire to dramatically improve the island’s tourism offerings.

Yet, despite the crush of pitchmen pouring into Havana, only three dozen foreign-investment projects have been approved since a new investment law was adopted in 2014, Cuban officials say, out of a total of 200 on the island.

“This is not about doing whatever project that interests whichever foreign investor,” Deborah Rivas, the Cuban official charged with coordinating foreign investment, recently told Granma, the Communist Party’s newspaper. “We aren’t in the process of accelerating the privatization of the Cuban economy.”

Even if trade and local economies made strides to normalize, Cuba will face a long journey to relative prosperity.

Now this is an Elizabeth Warren paradise!

Can’t be. No indians.

$2 billion in foreign investment.
That’s a drop in the bucket to what our political investor class will spend to buy this elections raft load of corrupt politicians.

“Fixed capital investment in Cuba represents just 10% of GDP, which is half the regional average. This likely won’t change until the embargo is lifted, as that would facilitate the arrival of significant new foreign capital.”

There is ONE country in the world that embargos Cuber, and that’s the U.S.

EVERY major economic power in the world is free as a bird to pump money into the island paradise, every hugely wealthy company can invest freely in Cuber.

Well, except for the Communists. They suppress foreign investment, and foreign investors are REAL leery of investing in a nation with a history of stealing private property.

Harvard is full of crap. There’s absolutely no linkage between “lifting the embargo” and the flow of investment capital into Cuber.

JFK, is that you? I thought you were dead.

So why did the NASDAQ article claim that “Starwood Hotels and Resorts Worldwide Inc. …whose brands include the Westin, W, and Sheraton chains” is a U.S. company? The Chinese are in the process of buying Starwood as we speak.

Because it is still a US company until the deal goes through?

The main point about the US embargo is that for its removal, all Cuba has to do is show it is respecting human rights and moving towards a democratic form of government.

Additionally, the embargo does not forbid Cuba from buying material from the US. Cuba can buy many items from the US, but it has to pay cash. No access to US Government insured credit.

Make no mistake, there is a huge number of people who want to go to Cuba before the USA comes in, commercializes everything, and strips everything that is unique about the island.

The U.S. Companies that get in first are going to make a ton of $$$.

Cuba would be very smart to set strict limits on US investment, and also smart to reinvest those profits into things like taxicabs that resemble 1950s cars.

But even after that happens Cuba’s favorable demographics could ensure that it stays the jewel of Carribbean tourism for a long time. Most Carribbean islands are 90% black, and the one island that isn’t, St Bart’s, can charge 5x-10x in tourism because of this.

I’ve observed betimes you are an idiot.

You never cease to confirm my observation.

I find the opinion you wrote so extremely despicable, condescending and offensive that I feel nausea right now.

Those people I left behind are not picturesque little clowns like you so ignorantly think. They are human beings who also wish they had the right to “life, liberty and the pursue of happiness.”
They rather not be driving those 1930s, 1940s and 1950s cars. That’s the result of scarcity. Scarcity, necessity, poverty are some of the tools the castro brothers have used for almost 60 years to keep a boot over their necks.
What you say is “unique” and you want to keep the way it is, is only the natural result of oppression and repression of the worst kind.
Cuba was unique before the castro brothers. It was unique because it home of a vibrant people living in a vibrant economy. It was unique because it had one of the most advanced Constitutions of the time.
Yes, there were problems. Yes, Fulgencio Batista was a dictator. Yes, the Cuban people wanted him out. But the castros were not better. They just ignored the constitution until 1976. They killed, imprisoned, and exiled ruthlessly. They suppressed freedom of speech. They implemented strict gun control. They confiscated ALL private enterprise. They took control of education. They prohibited religious expression.
Then in 1976 they created their own mockery of a Constitution that guaranteed their stay in power.

And all that’s what you think is a cute tourist attraction. Fuck you, sir.

The article said that Cuba is a long way from prosperity, I merely point out this isn’t true. I empathize with the Cuban people. But Raul Castro doesn’t and neither does Obama and I come to discuss what is rather than what ought to be.

Local mainstream news in South Florida ridiculed the claims of the Cuban refugees yesterday, running a piece about how the gangster Meyer Lansky’s children want compensation from the Cuban government. I’m sure the media could have found somebody more sympathetic than somebody complicit in dozens of murders.

There is pent up demand for Cuban tourism. Nearly every liberal in America has been told how wonderful Cuba is. There’s an entire district in San Francisco named for Castro.

A half century away from America has allowed Havana to remain an almost European city (but crumbling), and that local, distinctly unamerican charm, alone will make Cuba a tourist destination. Nearly every Amercan city has a bland sort of sameness and Americans like to visit places that are different (Unless and until Havana is leveled to make room for freeways, McDonalds and WalMart).

And anybody who visited a Carribbean Island before the Cruise ships showed up, ruining both the local charm and the pristine beach environment, will want to visit Cuba before the entire North coast of the island is filled up with ugly condominiums, shady diamond merchants and illegal handbag knockoff artists, & casinos.

Maybe you need to read my last sentence again.

Do you want to deny them all those benefits, just so that a few people can go see ‘something different’?

If that’s the case, sir, please go back to my previous comment. Last sentence.

“There’s an entire district in San Francisco named for Castro.”

Ummm… No, you moron.

The “Castro” is a famous (infamous) gay enclave, named for a street in the area.

Castro Street was named for José Castro (1808–1860), a Californio leader of Mexican opposition to U.S. rule in California in the 19th century, and alcalde of Alta California from 1835 to 1836. The neighborhood now known as the Castro was created in 1887 when the Market Street Railway Company built a line linking Eureka Valley to downtown.

Cuba is a good test case for the results of a government policy of fighting “income equality.” If this is the goal, this is the result.

I, for one, think the US got better results.

I’d like to trade 100 liberals for every 1 freedom loving Cuban. Figure it for a win/win situation.
Liberals get to live in their “Cuban” paradise with their ration books and their carbon free bicycles and the Cubans get to live free in America.

Sounds a lot like Obama’s economy, and it will only get worse under Hitlery or Bernie …

Socialism has always failed, and will always fail.
It raises its ugly head about every generation, as young people, coddled by their parents and indoctrinated in “social justice” and other leftist dogma in government run schools that are run by the leftist that have taken over our “education” system.

it never ends well … socialist governments (Hitler, Stalin, Mao, Pol Pot, and others) murdered about 262 MILLION of their own citizens in the 20th century alone. Once in power, they ruthlessly suppress, then eventually murder, political opposition (after first disarming the people to ease the democide.

NEVER let your government disarm you. it’s the first step to mass murder, no matter what sort of utopian “lipstick on a pig” spin they try to put on it.