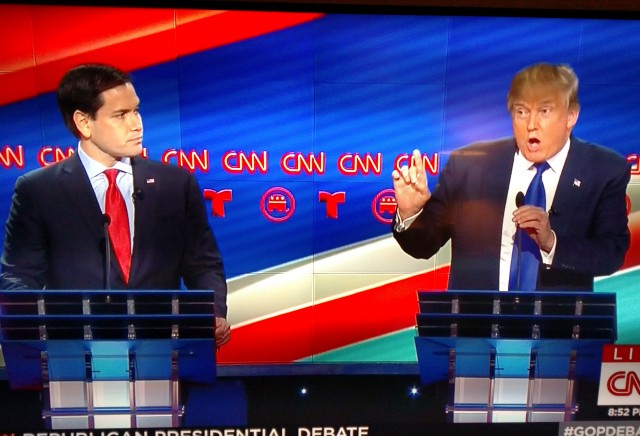 For months now, Donald Trump has spouted the same line on immigration, promising to build a border wall and deport people here illegally.  Last night, he admitted he would not deport the 11 million people in the United States illegally.  It was posturing.

“We had a board meeting [at the New York Times], it was off-the-record, suddenly they leak it, it’s all over the place,” Trump said.

“They said it’s negotiable on the wall,” Hannity said in reference to Trump’s stance on Mexican immigration and his oft-stated promise to build a border wall.

“By the way it is negotiable. Things are negotiable,” Trump said. “I’ll make the wall 2 feet shorter or something.”

Trump was quick to add that the negotiation does not include nixing the idea altogether.

“Building it? Not negotiable.”

“Would it be negotiable about the 11 million?” Hannity pressed. “Maybe let some people stay if they register in a period of time?”

“I would say this,” Trump added, “we will work out some system that’s fair, but we either have a country or we don’t. We need a border. We need a wall.”

This should be causing Trump supporters cognitive dissonance.  After all, he shot to prominence early in the race by taking the most aggressive possible stance on immigration.  Now he is backpedaling to the exact same position as his reviled Gang of Eight competitor, Marco Rubio.

Well, first of all, and before we do anything, I’ve been abundantly clear on this. When I’m president of the United States, before we do anything on immigration, we are going to secure the border. And, that’s not just the physical border with Mexico, it’s Visa overstays. That’s 45 percent of the problem right there.

It also has to do — that’s why we need e-verify, and entry-exit tracking system, and so-forth. And, until that happens, we’re not doing anything else. And then we’ll see what the American people are willing to support.

Those are exactly the same positions – build the wall, then figure out what to do with the people already here.  There is literally no daylight between the Rubio and Trump positions on immigration.

So before you run out to vote Trump because Rubio betrayed you on immigration, remember, 1) they’re the same on the issue, but 2) Trump is lying to you about it.