The Latest from Brussels

The Latest from Brussels

Paris bomber dead, one suspect still on the loose 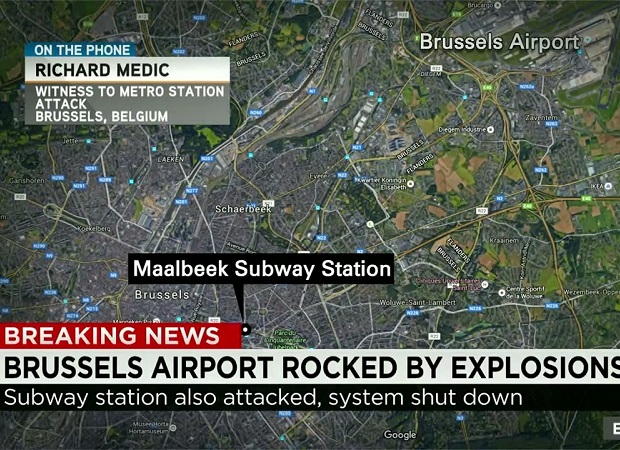 Officials: Some State Department personnel in Brussels unaccounted for https://t.co/8qwgYDhnAr

An Islamic State bomb-maker was one of the two terrorists pushing suitcase bombs in the Brussels airport attack, The Associated Press, The Washington Post and Fox News reported.

His DNA also has connected him to November’s Paris attacks, the Post said.

Two brothers blew themselves up during bloody terrorist attacks that rocked Belgium’s capital and, in fact, all of Europe — and the nightmare isn’t over, with at least one other attacker still on the loose.

Belgian federal prosecutor Frederic Van Leeuw identified Ibrahim El Bakraoui as one of two suicide bombers at the Brussels airport and his brother, Khalid El Bakraoui, as the man behind a deadly suicide blast about an hour later on a train near the Maelbeek metro station.

There has been no official word yet on the identity of two other men seen, alongside Ibrahim El Bakraoui, pushing luggage carts through the Brussels Airport in a photo released by authorities Tuesday.

One of those unidentified men is a presumed suicide bomber himself. The other, dressed in light-coloring clothing and a hat, is thought to have placed a bomb at the airport and then left. He’s now on the run, according to Van Leeuw.

One of the Brussels attackers was deported from Turkey:

Belgium had been notified of the terrorist links of one of the suicide bombers involved in the deadly Brussels attacks when he was deported from Turkey last year, according to Turkish President Recep Tayyip Erdogan.
The Belgian citizen was detained in Turkey’s southeastern Gaziantep province, which borders Syria, in July of 2015, and was subsequently deported, Erdogan said.

“One of the attackers in Brussels is an individual we detained in Gaziantep in June 2015 and deported. We reported the deportation to the Belgian Embassy in Ankara on July 14, 2015, but he was later set free,” Erdogan said, as cited by Reuters.

Belgium ignored our warning that this person is a foreign fighter,” he added.

The suspect was deported to the Netherlands at his own request and Dutch authorities were also notified of the matter, Erdogan added.

The Turkish president’s office later identified the attacker as Ibrahim El Bakraoui, who is believed to be one of the suicide bombers that carried out the Brussels airport attack.

Belgian Justice Minister, Koen Geens, confirmed that the suspect had been deported to the Netherlands, but claimed, at the time, he “wasn’t known to us as a terrorist, but only as a common criminal on parole,” VRT reported.

Erdogan’s comments are “being carefully looked into,” a Dutch government official told Reuters. He said that they could not yet confirm if El Bakraoui had been in the Netherlands.

Belgian police believe that brothers Ibrahim and Khalid El Bakroui, both Brussesl residents, were suicide bombers responsible for explosions that rocked the airport and a central subway station in Belgium’s capital on Tuesday, killing at least 31 people.

Ibrahim reportedly blew himself up at the airport, while Khalid set off the blast on the metro.

It was disturbing yesterday after taking off from Paris and landing at Heathrow and going to our connecting flight to find out that Brussels had been attacked while we were in the air.

I am glad to be back in the good old US of A.

But, I have to wonder when we will be next.

Glad to hear you are safe through this LR. I can’t see an end to this until either the terrorists and their supporters (to any degree) are deported or Europe capitulates.

This is war and invasion, not just a criminal problem. Only one side can win.

Here’s what you aren’t hearing forksdad. And why I and my wife weren’t shocked when we got the news.

On Monday, the French air traffic controllers started a three a work slow down which meant that the airports in europe were cancelling flights and experienced backlogs of people waiting for flights. 33% of flights in Europe were cancelled on Monday alone according to the French broadcasts I watched on France 2 news.

I have no doubt that the terrorists saw this second day of the work slow down as a perfect time to attack. More people and more victims and more confusion.