Another insect crawls into the news cycle.

While much recent media attention has been focused on mosquitoes and the Zika virus they transmit, another pest is now crawling into the news cycle.

Lice have mutated to resist the pesticide that has been effectively used against them for years, and 25 states are experiencing infestations with “super lice”.

A strain of so-called ‘super lice’ has hit a reported 25 states, causing concern and frustration among parents because the bugs can’t be killed with most over-the-counter treatments. The treatments, known as pyrethroids, had a 100 percent success rate in 2000 against lice but now only work in 25 percent of cases, KSDK.com reported.

A new FDA-approved treatment called AirAlle, which was developed by Lice Clinics of America, has been found to be effective against the super lice, with treatments costing about $170.

“We use heated air, and we dehydrate the lice and the eggs in a single treatment,” Claire Roberts, CEO of Lice Clinics America, told KSDK.com. “It takes about an hour, and we guarantee it.

The map below summarizes the locations where the “super lice” outbreaks have occurred. 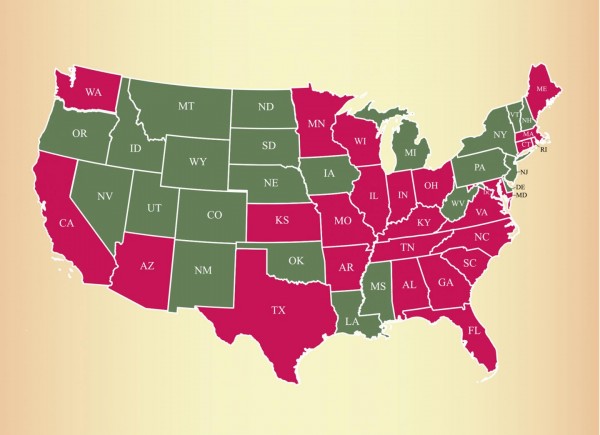 Lice populations in the states in pink have developed a high level of resistance to some of the most common treatments.

Unlike mosquitoes, head lice are not known to transmit any disease and are not considered a health hazard. However, dealing with a lice infestation is always a challenge. Here are some common myths, debunked for your convenience.

It has been a busy year for public health professionals already…and March as barely started.

My child had lice just before Christmas. I had to get the heat treatments for everyone, just in case.
The problem in our area is that Oakland Unified doesn’t quarantine kids with lice because by their estimation it’s damaging to their self-esteem. Krazy.

Super Lice need a path to citizenship and have the right to vote for Hillary Clinton.

I hope that’s not actual size!

In NY State school districts there was a time the school nurse would send the identified child with head lice home, along with the details of how to remedy the child’s head and what action to take in the home to keep it from re-infestation. Yes, the child was re-inspected upon return to school. I understand they cannot now send a child home nor treat the child in school. Which is worse? Being shunned for being the kid next to you known to have “cooties” or to quietly help the child and family get through something which occurs most winters?

If lice get into the carpet of the library of an elementary school, every child will take them home.

There is a product, RID, for control of head lice.

After I put a RID sticker on my motorcycle helmet, I never had one stolen again.

Huh.
I read the title of this post in my RSS News Feed and thought it was another post about the Presidential race.
Color me surprised.

When poisons no longer work, go to barrier methods. Diatomaceous earth are the fossils of two cell animals that feels like talcum powder to us and broken glass to lice, bed bugs, etc. Rub it in the hair and wait for the beasties to die of dehydration. Repeat as needed or when the hair gets wet.

Also good as a garden pest control and comes in a food grade for those seeking a boring diet.

Diatomaceous earth is great stuff. We use it as a non-chemical pest (ant) control around our gardens.

Just don’t get it in your eyes.

Why do I think of The Tick whenever I see a reference to “Super Lice”?