SFSU protesters: “We have nothing to lose but our chains!”

SFSU protesters: “We have nothing to lose but our chains!” 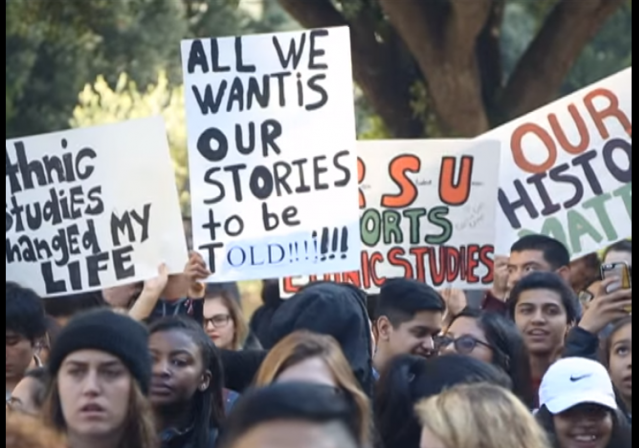 I was a Russian Studies Major in college. It involved the study of Russian language, literature and culture, as well as the Soviet State. Among other things, I studied in Moscow. It was an academic endeavor, not political activism.

Student’s at San Francisco State University’s College of Ethnic Studies are upset that there might be some programming cuts as a result of overall budget problems. And true to their curriculum, they took up protest.

Within an hour, the courtyard in front of Ethnic Studies was flooded with students, faculty and other members of the community, many wearing black with red accessories in solidarity with the potential faculty strike in April. Peppered among the sea of black and red were white signs and banners with messages of unity….

“Ethnic Studies is the reason that I’m still in school,” said Black Student Union Vice President Hanna Wodaje. “It’s the reason why I’m able to graduate, and it’s the reason why I’ve decided to pursue my education and take it seriously, when in other classes I felt ignored and silenced and marginalized.”

The crowd broke out into chants led by Cardenas and Peña, who raised their fists in the air and shouted, “What do we want?” The enthusiastic group thundered back, “Education!”

In the final minutes leading up to the march to the conference center, students hung signs with messages like, “Education is a human right,” from their necks, linked arms and formed a wall blocking the path from other students, who were looking at the protest with mixed curiosity and annoyance.

Emotions were raw, according to the Golden Gate Express, and involved the inevitable hijacking of a local issue by Palestinian activists (emphasis added):

With only minutes left before the meeting ended, protest organizers urged the crowd outside to link arms and form a human path through which Wong and the other administrators were forced to walk. As the stone-faced Wong exited the meeting, the line of students chanted, “Shame on you!” From there, the protesters marched through campus, chanting, cheering and waving to onlookers before reaching Malcolm X Plaza for a follow-up demonstration.

The crowd overwhelmed the quad, raising their fists and crying out messages of encouragement to the dozens of organizers who flocked to the stage. Among the statements made by those who took the stage were messages of solidarity with Palestine, remembrance of various victims of police brutality and a rejection of the colonialist and imperialist attitudes they accused the administration of having. Most important was the steadfast commitment to the College of Ethnic Studies, no matter the cost.

Students United will never be divided

America’s most famous “undocumented immigrant” joined in to support the protests:

Dear @SFSU: Ethnic studies is American studies. College of Ethnic Studies needs to survive/thrive. (Sorry I am late on this.) @emergingUS

The budget cuts are at least a year away, the University later announced.

The pampered class needs to shovel sh*t as a job. Only then they will appreciate their education and understand the worthless value of a sheepskin in ‘social justice’ studies.

A human right is something God gives you and man can take away. God gave us freedom, the ability to speak, and so forth, and only the actions of other people can take those rights away.
>
A human right is NOT something another person chooses to give us. Whether it is an education, abortion, a nice apartment/home, or whatever, these are things that others must provide. If others must provide it, then how can it be deemed a “God given right”, otherwise known as a human right?
>
Claiming things such as an education in the subject I want to study is a desire and not a right. By claiming this to be a basic human right, they are showing their lack of education, an inability to think, and, likely, how continued support of their education would be wasted for the results up to now are disappointing.

“We have nothing to lose but our chains!”

Can’t you just imagine the Professor leading a protest against government cuts, chanting this in front of the Kremlin in 1980? 🙂

Searching for your identity in ethnic studies curriculum is like looking in a carnival mirror in a Fun House to see if you matter.

So, do they really, really want to know their heritage or do they want to hear how wonderful they are, just as they heard in grade school? Are they hoping for a Life Participation trophy when they graduate?

Ancestry.com would be a cheaper and a truthful curriculum. The Heritage Foundation is a top-notch resource for traditional values, values that give meaning to life.

A socialist cannot grasp the concept of running out of other peoples’ money. Nor do they understand the value of money.

As G. de La Hoya stated in an earlier comment here, some physical labor would teach these pampered selfish socialists some lessons in life.

The real world will NOT treat these people well.

I’d fire every damned one of them.

When I first heard about this, I thought it was French-language majors announcing something about misplacing their canine companions. Nothing to lose by their chiens.

…because other classes required me to, you know, work and study instead of just reaffirming the delusional narcissism that I grew up with.

“It’s the reason why I’m able to graduate,”

…since I’m guaranteed straight ‘A’s due to my ethnicity. I don’t get that guarantee in other course pursuits (except maybe gender empowerment studies, but I could only choose one program).

“and it’s the reason why I’ve decided to pursue my education and take it seriously,”

…’cause I don’t take education seriously anyway, since I’m entitled to be given everything. But ethnic studies makes it look like I do.

“when in other classes I felt ignored and silenced and marginalized.”

…in fact, they went so far as to ask me why I wasn’t protesting Egypt’s border closure to Palestine in addition to the closure by those Zionist Jew-boys. What a bunch of haters!

I do hope their studies teaches them to spell barista on their job application form.
However the reality is they’ll probably be professional welfare leeches and community agitators filing lawsuits over hurt feelings.

“Education is a human right,”

So go educate yourself. Find out how accounting and how supply and demand works. You don’t need to go to college. Buy a few books and read them. Then maybe you will understand why your chosen major is being cut back.

It seems that EVERYONE is marginalized. This whole lot is whining so loudly that their message is lost. That is, if they really do have a message. What might be effective is if they throw themselves on the ground, kick, beat their fists, and hold their breath. Sloganeering is falling on deaf ears.