On the cover of the The NY Times

On the cover of the The NY Times 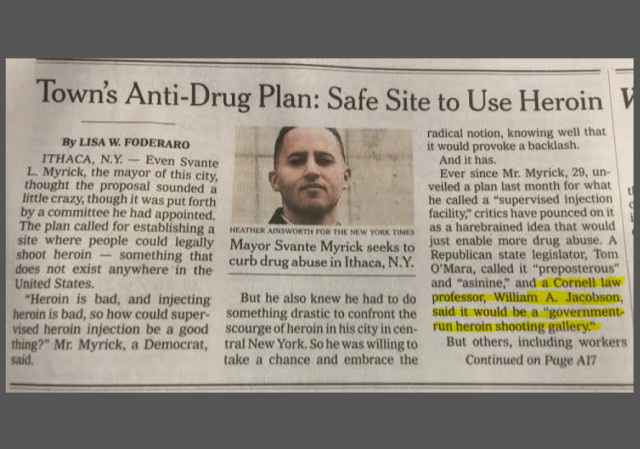 It doesn’t sound quite as good as “on the cover of The Rolling Stone.”

A reader emailed me a photo of a NY Times front page story today in which I am quoted.

Thing is, the Times article suggests I opposed the proposal:

Ever since Mr. Myrick, 29, unveiled a plan last month for what he called a “supervised injection facility,” critics have pounced on it as a harebrained idea that would just enable more drug abuse. A Republican state legislator, Tom O’Mara, called it “preposterous” and “asinine,” and a Cornell law professor, William A. Jacobson, said it would be a “government-run heroin shooting gallery.”

In fact, in my blog post from which the quote was taken, to which The Times links in the online version, I was ambivalent:

I have mixed feelings about such a location from a public policy perspective. The heroin scourge is real, I’m just not sure normalizing the use helps the problem.

Nonetheless, they spelled my name correctly, and did link in the online verison.

If a reader saw it, I’m sure many others did as well.

It seems everytime I read @LegInsurrection it's attacking a proposal without any alternative. Not helpful. https://t.co/LTzsHqYfRw

Congrats? Nothing wrong with ambivalence, at least it is honest.

So your comments are appearing in the NY Times?

Jess Coleman obviously has a very limited perspective on this, and probably other, issues. It was not all that long ago that SJWs were pushing doctors to prescribe more and stronger painkillers to patients, because people were in pain.

The problem with painkillers is that, justified or not, they are addictive.

After a few years of heavier, legitimate use of painkillers, we have a larger population of addicts, who turn to street drugs, and when the drug quality is corrupted, die from overdoses.

Now the Feds want to prosecute doctors for prescribing more and stronger painkillers to their patients, and SJWs want to make it easier for addicts to shoot up in somebody else’s neighborhood.

I submit that recent experience demonstrates that this might be problematic.

Who is going to supply the heroin? The government via taxpayer dollars or the local dealer being paid by money gained via illegal drug dealing, prostitution, and theft from whatever homes and businesses happen to be passed by addicts on their way to their “supervised” fix?

The proposed “injection facility” will inevitably serve as a magnet for pre- and post-“supervision” crime, child abuse, noise, litter, filth, and violence. Which lucky Ithacans will be selected to sacrifice their peace of mind, security, and neighborhood to this marvel of state-funded virtue display?

Exactly! The unintended consequences are going to be a bitch.

This is what puzzled me before, it still does. Some kind of legal issue, I think called liability? Still being on the front page on the NY Times is cool…definitely.

If they are going to have government supervised dispensing of drugs, they should be passing out suboxone (buprenorphine/naloxone), which helps get people off heroin.

It’s bound to be a huge success.

Every thing the government undertakes always turns out great.

Well done. You’ve classed up their joint a little bit.

Maybe someday we’ll see you as a regular byline or better yet LI will have a higher readership.

Amazing that Jess Coleman is an editor, but then it’s HuffPo. And Coleman’s only solution is to let doctors address the problem of Heroin addition. In California, we have “medical marijuana” and almost anyone can get a prescription. The number of ill people who can actually benefit from marijuana is very small, but the number of people who have prescriptions from doctors is very large. It’s like left wing doctors will give anyone who wants to smoke pot, a “prescription”. Should anyone that wants to inject Heroin get needles and a prescription?

I don’t know what the solution to Heroin addiction is, but Jess Coleman doesn’t know either, and his solution is foolish. But it’s HuffPo, so he only needs to be outraged, and criticize everyone who questions current policies and wants to find an answer.

To Mr. Coleman, ambivalence = attack.
What a strange dictionary for an editor.

Safe, legal, and rare. Pull the other finger.

Still, tolerating or normalizing recreational drug use is a far cry from murder and debasement committed by the State-established pro-choice cult during their abortion rites and clinical cannibalism of human life during its most vulnerable phase of evolution.

Coleman is a putz. Actually, the Prof did offer an alternative: no heroin shooting gallery.

Coleman should quickly take advantage of the ad up top – the one that says, “New limitless pill can supercharge your IQ.”