Were they wrong to do so?

An award-winning news anchor lost her job after a Facebook post she made concerning a local murder in which no arrests were made. A WTAE-TV anchor for 18 years, Bell won 21 regional Emmy Awards.

You needn’t be a criminal profiler to draw a mental sketch of the killers who broke so many hearts two weeks ago Wednesday. I will tell you they live within 5 miles of Franklin Avenue and Ardmore Boulevard and have been hiding out since in a home likely much closer to that backyard patio than anyone thinks. They are young black men, likely teens or in their early 20s. They have multiple siblings from multiple fathers and their mothers work multiple jobs. These boys have been in the system before. They’ve grown up there. They know the police. They’ve been arrested. They’ve made the circuit and nothing has scared them enough. Now they are lost. Once you kill a neighbor’s three children, two nieces and her unborn grandson, there’s no coming back. There’s nothing nice to say about that. 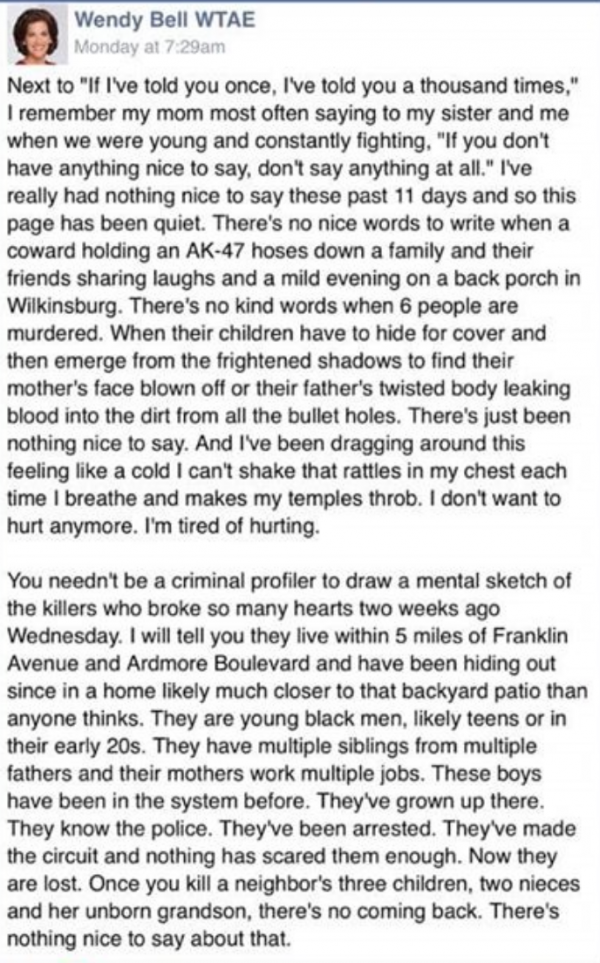 A statement from Hearst Television, the station’s parent company, said, “WTAE has ended its relationship with anchor Wendy Bell. Wendy’s recent comments on a WTAE Facebook page were inconsistent with the company’s ethics and journalistic standards.”

WTAE-TV president and general manager Charles Wolfertz III confirmed the news and declined to comment. A spokesman for Hearst Television also declined to comment further. News of her firing drew hundreds of online posts within the first half-hour, with some people saying they would be switching to another station.

Ms. Bell did not return phone calls for comment from the Post-Gazette, but she told the Associated Press that she didn’t get a “fair shake” from the station, and that the story was not about her, but about “African-Americans being killed by other African-Americans.”

“It makes me sick,” she told The Associated Press when reached at her home on Wednesday. “What matters is what’s going on in America, and it is the death of black people in this country. … I live next to three war-torn communities in the city of Pittsburgh, that I love dearly. My stories, they struck a nerve. They touched people, but it’s not enough. More needs to be done. The problem needs to be addressed.”

I have removed a post that I initially placed here on Monday. I sincerely apologize for that post about the… https://t.co/SPdfljNykO

Ms. Bell later apologized for her Facebook post. In part, the apology read, “I now understand that some of the words I chose were insensitive and could be viewed as racist. I regret offending anyone. I’m truly sorry.”

As of Wednesday afternoon, that Facebook page had been taken down. Her profile on the WTAE-TV website also had been removed.

Amazing a person can be fired for stating the obvious.

When reality intrudes on the State-established religion instructed by gods from the twilight zone (a.k.a. “penumbra”), reality loses, always.

Unfortunately, the truth set her free. This is beyond absurd.

you shall state the truth, and the truth shall make you unemployed…

It’s the Amish on Rumspringa.

Political Correctness: Tyranny with manners.
Fight it will all your being.

So many, many more black children will be killed until we deal with reality.

If black lives matter, where’s Al Sharpton? He’s not there because no white people were involved.

There’s nothing to gain politically by pointing out that the greatest danger to a black man is another black man.

Well, given her urgency in placing blame for the murders without a scintilla of evidence suggests to me SHE needs to go to the top of the suspect list. She looks the type – white, professional, probably has oil futures in her stock portfolio…. and which one of you misogynistic pigs wants to posit that a woman couldn’t have committed these murders?

I’m sorry she was threatened by her employers and walked back the truth.

1) States the truth and gets fired for doing it.
2) Is rebuked by blacks and other leftist liars for speaking the truth.
3) Cowardly repudiates her own truthful statement.

This is, in part, why the dysfunction in segments of the black population will NEVER be solved.

The BLM movement has never tried to get at the root cause of the issue of violence against blacks. They know that most of the crime committed against blacks is committed by other blacks. Instead they focus on a very small amount of cops using force against blacks. As we all know most of those incidents are due to resisting arrest or out right confrontation with the cops. The major issue like this reporter pointed out in her FB page show that the destruction of the black family is the main cause.

79% of those murder victims had a prior arrest record, as did 87% of murder offenders.

Nobody makes money on Facebook, but one poorly worded phrase and the SJW mob will ome to ruin your life.

Agree! FB and twitter are two of the most destructive forces in our daily lives. Just imagine if Trump had never used twitter. He would probably be viewed more positively than now. With FB and Twitter you don’t have time to reflect on what you are saying and as most of us know, time is a magic balm to hurt feelings.

It’s the White Man’s Burden. Obviously. The Plan is to force them to kill each other with mind control beams and the sheer force of the White Man evil eye.

Or the young black men pulling the triggers could take responsibility.

What did Eric Holder say about America? That we didn’t have the courage to talk about racism?

Who are the cowards here?

I have a dream that the average person and even TV journalists will be able to discuss racial disparities in FBI crime statistics openly and without fear.

Wait till the killer/s are caught and see how close she was.

The Thought Police are here, George. You warned us that these days would come.