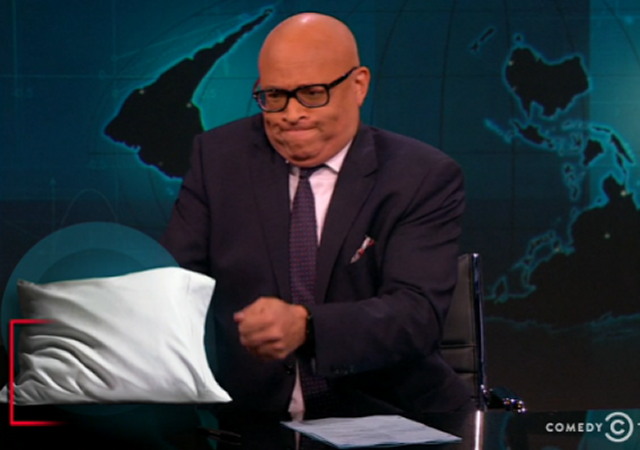 In recent years, whenever a violent tragedy has occurred, the left has been quick to blame the NRA, Republicans, the Tea Party, and conservatives.

Then they stand on a soap box and lecture everyone about civility and demand a new tone in our politics. It’ll be interesting to see if anyone on the left condemns Comedy Central host Larry Wilmore for suggesting he’d like to murder Donald Trump with Supreme Court Justice Scalia’s pillow.

Deadline Hollywood reports that while discussing Donald Trump on his show on Wednesday, “The Nightly Show” host Larry Wilmore shared a twisted fantasy about smothering Donald Trump with a pillow:

“Sorry everyone,” Wilmore said. “I don’t want to give him any more oxygen. That’s not a euphemism, by the way. I mean it literally. Somebody get me the pillow they used to kill [Supreme Court Justice Antonin] Scalia and I’ll do it — I’ll do it!” he said, then demonstrated. “I could get in trouble for that, actually!” Wilmore added, sheepishly, as the audience laughed.

Trump has repeatedly disavowed the David Duke flap but the left can’t give up on false accusations of racism which have served them so well for the last eight years.

One other thing to note is that very few people are listening to Larry Wilmore. Since taking over this Comedy Central slot from Stephen Colbert, viewership has dropped by over 50 percent.

The Colbert Report averaged 1.3 million total viewers in February 2014, according to Nielsen. A year later, Wilmore’s recently launched Nightly Show was holding a respectable average of 812,000 viewers. Moving forward another year to this month, Wilmore averaged 580,000 total viewers each night in the first week of February.

I wonder why no one is watching.

How droll. I hope it is not with a firearm though. The left needs to ban those.

Keep it up. Every infantile leftist move like this is a vote for Trump.

I wonder if the level of tolerance for this violence would shift if the target were Hillary.

Also, did I miss the trigger warning?

No trigger warning, it was a pillow, not a gun.

It really does not matter what Trump said!

The wacky left is going to push the narrative that he is
(make your list)
The dog whistles will be screeching full blast till the election.

The skit was really sick humor! But it’s from the left.
Do as I say not as I do.

Remarkable what some assume will pass for wit.

Network execs at Comedy Central should be fired.

Did anyone need another example of hypocrisy from the left? SOP – that said, Trump made it easy for them by not answering Tapper’s question right away. David Duke who? just didn’t cut it. Only a small sample, a warm up pitch of what will come from the media no matter who is the Republican nominee. The problem for Trump is he, and his never ending mouth, gives them so much ammunition.

Everybody wait just a second.

Ok, this was in bad taste (for a whole host of reasons), but before everybody gets too bent out of shape, does everybody know WHY Wilmore was making this particular comment?

Trump, shortly after Scalia, death engaged in some conspiracy talk with radio host Michael Savage, suggesting that Scalia was murdered on Obama’s orders, and that Ron Paul and Trump himself was next on the hit list.

There IS some biting social commentary here, but it has more to do with Trump’s “say anything, no matter how outrageous, and the truth be damned” attitude.

So, everybody take a deep berath and take this one with the boulder of salt it deserves.

Even if your explanation is the basis for the act on the show, it doesn’t make is any more funny, any more “biting” as commentary, and especially doesn’t make it any more appropriate.

Some things are just out of bounds. Hitler. Executing people because you disagree. Relishing suicides. Those kinds of things.

This is not “biting social commentary.” It is not metaphorical language for defeating the person in an election. It is advocacy for violence against a political candidate.

“Trump, shortly after Scalia, death engaged in some conspiracy talk with radio host Michael Savage, suggesting that Scalia was murdered on Obama’s orders, and that Ron Paul and Trump himself was next on the hit list.”

Oh, PLEASE tell me you know of a recording of THAT!?!?!

THAT would be comedy GOLD…!!!

I guess Comedy Central has gone the route of other cable channels, NOT targeting viewing audience but looking for social media buzz, retweets, likes, etc.

The tools of the far left fanatics always include providing a fictitious name for whatever they’re selling.

The Affordable Care Act isn’t, the Safe act doesn’t make anyone safer, and Comedy Central just isn’t funny. But hey, racism and lawlessness is what the far left is all about.

That explains why nobody watches these radical politicians masquerading as TV hosts any more. Bah!

He explicitly stated that this was not a joke. It should be treated as a credible death threat.

A fantasy is not a threat. Wanting to kill someone is perfectly legal, and saying so is protected speech.

My fantasies about Trump have him going back to a TV show wherein he hires washed-up has-beens such as Gilbert Gottfried and Dennis Rodman.