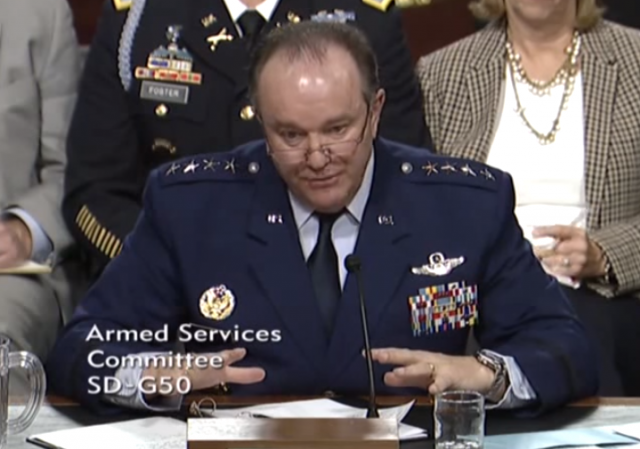 In the midst of the political circus, I missed this important testimony by the U.S.Commander of NATO about how ISIS has thoroughly infiltrated refugees, and how Russia is using the refugee crisis to undermine Europe.

Refugees from the Middle East and north Africa are “masking the movement” of terrorists and criminals, Nato’s top commander told Congress on Tuesday, despite the protests of human rights groups who say that refugees overwhelmingly have no ulterior motive but escape.

In testimony to the Senate armed services committee, US general Philip Breedlove said that the Islamic State terror group is “spreading like a cancer” among refugees. The group’s members are “taking advantage of paths of least resistance, threatening European nations and our own”, he added.

The Washington Times further reports that the Russians appear to be deliberately driving refugees to undermine Europe:

Breedlove also had harsh words for Russia, saying their indiscriminate bombing of civilians is intended to ‘get them on the road’ to Europe, where they can weaken the European Union and NATO with violence and division. The general said Russia is ‘weaponizing’ the Syrian refugees.

Breedlove says at least 1500 ISIS fighters have returned to Europe. “I’m not going to talk to you about intelligence,” he said at a news conference, adding that “many [countries] are saying they see planning happening” for a terrorist attack.

Not surprisingly, Moscow is not happy:

Russian defense ministry dismissed NATO allegations that Moscow, along with Syrian President Bashar Assad, is “deliberately weaponizing” the refugee crisis against the West, RT.com reported Thursday. Top NATO General Philip Breedlove told U.S. lawmakers Tuesday that Russian airstrikes against Syrian rebels and Islamic State group targets are leading to an increase in the number of asylum-seekers from the region….

Russian Ministry of Defense spokesman Igor Konashenkov asserted that the United Nations has recorded a decline in refugee flow from the war-torn country and that peace talks have been initiated after Russia launched air campaign in Syria last September, according to RT.com. He also said that the U.S.-led coalition formed to fight against the militant group, also known as ISIS, has failed to start the reconciliation talks.

Obama, Merkel et al are desperate to dissociate from their creation of a regional humanitarian crisis that progressed to become a global humanitarian disaster.

Russia would be unable to undermine Europe, if Europe were not hell-bent on undermining itself.

Muslim terrorists are undoubtedly flooding into Europe. Why? Because they can.

The political entity responsible for keeping them out is Europe itself.

It will be difficult to make a convincing argument that Europe’s spectacular failure to police its own borders is somehow Russia’s fault.

All NATO has to to to stop this weapon is not let the refugees in.

A few boats in the Mediterranean and some armed guards at the border and this ends.

Much better outcome with everybody than war against Russia.

And here on the home front, the current administration continues to weaponize #BlackLivesMatter.

Back in the 90’s, a female co-worker reported me to HR for using the word “exacerbated”. She said it sounded “dirty”.

I told the HR rep, who could hardly stop laughing, that all of us should probably get together for lunch and we could all masticate together.

Who and what caused the Arab Spring, including Syria’s Arab spring?

What is the relationship between rebel forces in southern Syria and Israel?

What are the agreements made between Russia and Syria?

In the sectarian Sunni-Shia war which side most threatens Israel?

We allowed ISIS to form. We gave weapons to the ‘moderates’ (who never existed in Syria) who promptly gave them to the AQ groups or ISIS. We continued to funnel money and arms to them knowing that most of it wound up in terrorists hands.

Yes, we tried a fancy fan dance to convince everybody that we were really fighting ISIS. Then Russia gets there and they hammer the terrorists, ISIS and other rebels. We allow the shoot down of two of their aircraft and expect them to either back off or start a hot war and they do neither. They keep throwing lead down range. And show us to be the ineffectual friend to terrorists that our government has become.

The fact that we fubared every other Moslem country in the region that let us ‘help’ ought to be enough. We need to pull out, let the Russians handle ISIS as they apparently can do and accept what comes.

We tossed the chamberpot into the stew here. It’s time to clean up our mess and get out of their kitchen.