“Empty talking points need to be punctured like helium balloons.” 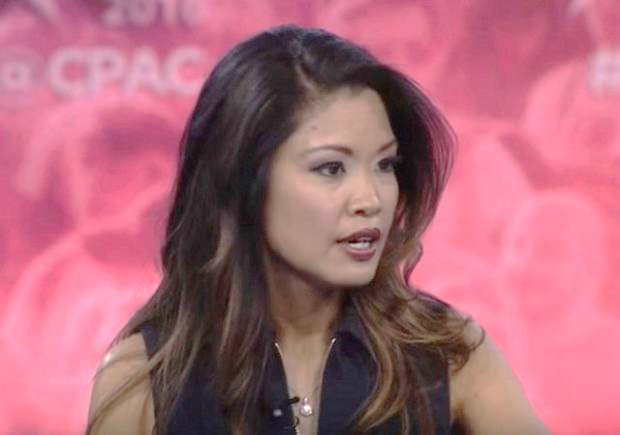 Many speeches were given at CPAC this weekend, but one stood out from the rest.

Conservative author, activist and entrepreneur Michelle Malkin gave a fiery speech in which she reminded movement conservatives that they have been repeatedly betrayed by the Republican Party.

Malkin began her speech by saying:

“It’s not people outside the party that have thrown the conservative grassroots base under the bus. It’s the people who have paid lip-service to limited government while gorging on it.”

She was only getting started. In the course of her seventeen minute speech, she went after Republicans for the Gang of Eight, Common Core, cronyism, immigration and more.

She slammed the party elites who smear and sneer at the conservative grassroots as fringe while pretending to support causes they care about at election time.

When it came to Common Core she named names, singling out John Kasich for claiming he believed in local control of education. About Bush, she said:

“There are three reasons why Jeb Bush failed. His last name, his support for amnesty and his cheer-leading and cashing in on Common Core.”

This was the first time Malkin has spoken at CPAC in 13 years and it was well worth the wait. Once you start watching this, you won’t be able to stop.

CPAC Friday: Cruz up, Carson out, Michelle Malkin on fire

For all of the presidential politicking, the rock star of CPAC Friday was conservative columnist Michelle Malkin. She exploded like a neutron bomb, searing every Republican who has betrayed the conservative cause. She reminded the audience that attacking Democrats was not good enough. The wounds destroying the Republican Party are internal.

She blasted former Florida Gov. Jeb Bush for his support of Common Core. She lambasted Kasich for his compassionate conservatism, a term she despises. She went after Rubio ferociously for his work with the Gang of Eight on immigration. Malkin scorched the earth, relishing every minute of her time in the spotlight. The crowd roared agreement with almost all of her remarks.

She is a Conservative icon, a lion, the female firebrand who championed Andrew Breitbart and so many, using her many talents to create HotAir, Twitchy, write books, and all the while live the life, write columns, and in all ways breathe Conservatism.

Glad that CPAC invited her, and that she chose to come. To speak: TRUTH. TO. POWER.

SHe’s also had so much family tragedy, and seems to deal with it with strength and dignity.

where can i find a copy of the text of her wonderful speech ?

Don’t know about text but the video is available

And we’re after scalps.

Michelle gets it. Also, she eventually got over her outright opposition of Trump for many solid reasons.

The Establishment candidates Rubio & Kasich who must first be eliminated from the race so Trump & Cruz can go mano y mano for the nomination.

Until then, I support the supporters of Cruz & Trump.

Voting Female is a slow learner on that one:
https://legalinsurrection.com/2015/08/scott-walker-has-fallen-hoping-he-gets-back-up/comment-page-1/#comment-612530

What phony. Opposes mandatory vaccinations because some idiot principal at her kids’ private school made her and other parents come to school to prove immunization when the school misplaced their own files. Self-centered scrunt.

I run into both Cruz supporting Trump haters and Trump supporting Cruz haters on twitter when they chose to come get in my face b/c I wont pick one over the other at this early period in the primary.

I explain why I do that and if they accept the logic, fine.

If they hurl insults? Blocked & Muted. Life’s too short to give them any more thought.

I agree with opposition to mandatory vaccinations just as I don’t agree with Obamacare and coercion to create peace of mind.

Mandatory vaccinations in public schools are….

2. completely supported by the “plenary police powers” of states and their sub-divisions

HOWEVER, I think that an “opt-out” should always be provided for parents/guardians with strong views on the matter.

Private schools and home schooling as two forms. There are others, and often in the statutes if you read them.

I have no problem with “Opt out” but id you do you have to face the consequences of your decision. I think public schools have the right and indeed the duty to say to anyone trying to attend that they must comply with the health laws of the land or find another school source. This is something that obama has not done with the massive influx of illegal children. We know that many of them carry different diseases that we have all but eliminated many years ago. And now because of his failure to defend and protect the US citizens we are in danger of sliding back to a 1930’s era.

It bears remembering that the REASON a lot of those “old” diseases were essentially eradicated in the U.S. is BECAUSE of mass vaccinations, too.

Just as a reality check…

Diseases eradicated in the US are returning thanks to the mass migration of illegals from third world countries. They are bringing a return of old diseases and new ones that we have never been exposed to thanks to our dedication to sound hygiene practices.

I’m unaware of Malkin endorsing T-rump, though she has said she likes the Sessions parts of his plan…

As of the time of this comment, Michelle had not endorsed Trump. She ceased hostilities & acknowledged that after Cruz, he is the lest of the remaining ‘evils.’

Lou Dobbs of FOX published a tweet today including an RT of a good conservative ally of mine for years, @KLSouth.

It reveals a letter co-authored by Paul Ryan & Ted Cruz in support of Obamatrade.

It’s disturbing to me, to say the least:

The letter is on Paul Ryan’s official Senate website:

Since, I think you’ll find Cruz and Sessions joined in killing the bill after CRUZ discovered some of its contents.

Note ALSO that Malkin endorsed the Cruz-Sessions BILL limiting HB visa abuse, and she noted T-rump’s muddled positionsssssssss on immigration in her speech.

Lookas likwe Ted Cruz has just set himself up to lose the general.
http://www.pfaw.org/press-releases/2016/03/extremist-anti-gay-and-anti-muslim-radio-host-join-ted-cruz-rally
The twitterverse was going crazy with this and Cruz has since cancelled his MS trip claiming ill health. ( I think boogers do that. )
But in light of this:

I call on Ted Cruz to disavow Bryan Fischer.

Also:
I call on Ted Cruz to disavow. Glenn Beck.

You are not just a moron, you’re a Collectivist moron.

I call on Trump supporters to disavow him and his fair-weather friend media whores:

If you’re really a conservative, wise up. Do your homework.

Mark Levin gave a stem-winder, too. On Saturday morning, no less, he had the crowd excited.

This woman sexier and sexier every year.

Trump supporters who believe their candidate is the anti-establishment destroyer of media are being conned, and the con is being perpetrated by the people they hate the most — the Clintonistas of network media. Not only are these people generally hostile to conservatism. They also are not content to simply sit on the sidelines and objectively report what candidates say and do. Recall Dan Rather and Mary Mapes, who took it upon themselves in 2004 to run an unverified story about George W. Bush’s military service. In charge of CBS at the time? Les Moonves.

Related: Ted Cruz Shreds Media for Wanting ‘Coronation’ of Trump as GOP Nominee So He Can Lose to Hillary.

None more so than Cruz’s interviewer, CBS’s Face the Nation host John Dickerson, who wrote a January 2013 Slate article published two days before Obama’s second inauguration headlined “Go for the Throat!” on “Why Obama Should Seek To Destroy the Republican Party.” Dickerson and Moonves are certainly eager to help any way they can.
http://pjmedia.com/instapundit/228430/#respond

Makes you think. (HandyJoby is excused from this exercise for obvious reasons, and he has to find more garbage from the Left-0-sphere lie machine).

Big fan of Malkin’s. Enjoyed her talk. And she’s hot, too.

What are these folks going to write about if we succeed in removing the chains of the libs and RINOS they decry?

When Michelle cashes out her investments and announces an enclave community for limited government devotees, that will be a notable walk for all the talk. I’m sure she believes the things she says, but neither she, nor Levin, nor Breitbart could ever win an election in a toss-up district. Her strident polarizing serves her economic interests, but it doesn’t really help conservatives hold or unify a congressional majority, and it doesn’t help to win a general election. I am wondering if the better approach is to sit out and encourage the massive freight train of unlimited government to accelerate.
.
It seems the only way our self-absorbed electorate is going to understand the merit of limited government is by suffering under the opposite of it. It is ironic that the most educated electorate in history is so information overloaded that it can’t even recognize and learn from the decade of suffering by Venezuelans; an electorate who loved the notion of unlimited government given their seemingly unlimited oil resources. Maybe Michelle can start her enclave there. Limbaugh says that conservatism works everywhere it’s been tried, perhaps it’s time for him to walk the talk too.

I personally love Michell Malkin and used to follow her religiously. However, like other TruCons, the more strident she got about solid conservatives over votes that I understood were a step, often the only step, in the right direction, I had to tune her and those like her out.

It’s easy to claim and even defend ‘real conservatism’ from the echo chamber of conservative punditry. It’s a bit harder to move that dial when you not only have to watch your front, but your back.

And, like when Jim DeMint said Harry Reid was a friend of his and “someone I could work with in the Senate” while denigrating Boehner completely during the difficult budget battle, Malkin’s battered wife excuses for Trump’s verbal assaults on her meant I had to drop her from my list of trusted sources on issues I care about.

And, as I will always honor John McCain’s service while setting his political opinions aside, so will it be for any conservative Trump apologist, Malkin or anyone else. Including Presidential candidates.

This chick is dynamite.