Bill Maher gets something right. 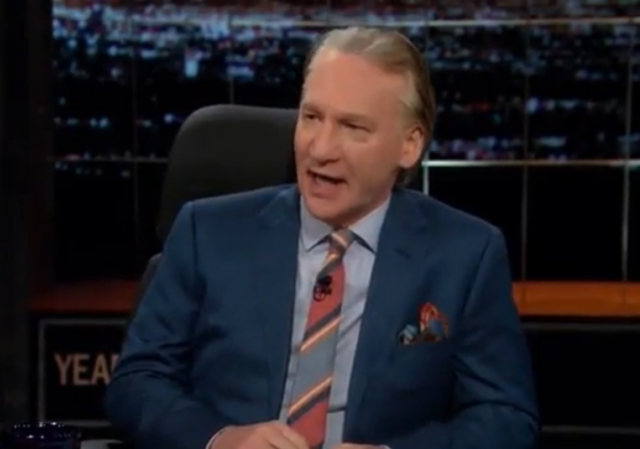 Bill Maher is the proverbial broken clock. While I disagree with him on most issues, he’s been accurate and articulate on the problems facing the West from Islamism, and particularly as to the dangers Israel faces.

The other night he talked about Donald Trump’s address to AIPAC in light of the Brussels terror attack, and made the point that given how miserably Europe treats Israel, perhaps the Europeans will finally understand what Israel faces.

During a panel discussion on his late-night HBO show Real Time, Maher blasted the UN and scolded Europe for its behavior towards Israel.

“I mean, in general. The U.N. – as of 2015, the United Nations Human Rights Council had issued more official condemnations of Israel than the rest of the world’s nations combined. I wonder now that Europe has been attacked four times now in a little over a year, and they say ISIS has 400 fighters that they are ready to introduce back into Europe, and they’re trying to get a dirty bomb – maybe Europe will have a little more sympathy for what Israel goes through.”

I’ve never figured out why Israel always got the blame for what the islamists did. The defender isn’t to blame for the attacker’s behavior.

Saw a bit of it earlier with mole face (granholm, our former gov).
What an embarrassment she is. Sure wish she’d go back to Canada.

Maher is doing a public service by his consistent realism about muslims.

It is easy to underestimate the degree of hatred for Jews in Europe. America should be a counterbalance for this but for the last 8 years Jews here have been in a self destructive love relationship with Obama, who seems to despise Israel.

Just look how the leadership of AIPAC hastened to grovel at Obama’s feet when their own members cheered his imminent departure.

Thank God that Israel itself has had a strong leader during these perilous times.

Kudos to Maher for his firm grasp of the obvious.

It is no less than Bibi himself who explains the problem the most thoroughly and most succinctly – Israel and the West are faced with an enemy whose complaint is unresolvable: you are not Muslim, therefore you must convert or die; we’ll accept nothing less.

The proper response to “therefore you must convert or die” is a very polite, with a smile, “You first. We insist.”

This is a completely preventable unforced error on Europes’s part.

If Muslim warriors don’t enter, then they do not blow stuff up. People are going to get really angry at the politicians who responded to Charlie Hebdo and the Brussels/Paris attempted train attack by opening the border to Syrian civil warriors.

I won’t hold my breath. Europe is the source of the worst anti-Semitism, always has been, and it’s there, right under the surface, as you can see by the way they are always attacking Israel fro defending itself, and blaming the Jews for anti-Semitism in their own countries.

Before European colonialism, Jews and Christians had a subservient state under Islamic law, but as long as they “knew their place,” paid the Jizyah tax and didn’t get into confrontations with Muslims, they were left more or less alone. The Muslims in the Middle East learned how to seriously hate the Jews from the Europeans, esp. the Germans in WW2, but also the Brit and French colonizers. And while most Europeans now say they think the Holocaust was bad, it really doesn’t trouble them all that much, 2 generations on.

His head popped out of his ass. He’ll put it right back in.