Marine General to Congress: We Might Not Be Ready for Another War

Marine General to Congress: We Might Not Be Ready for Another War 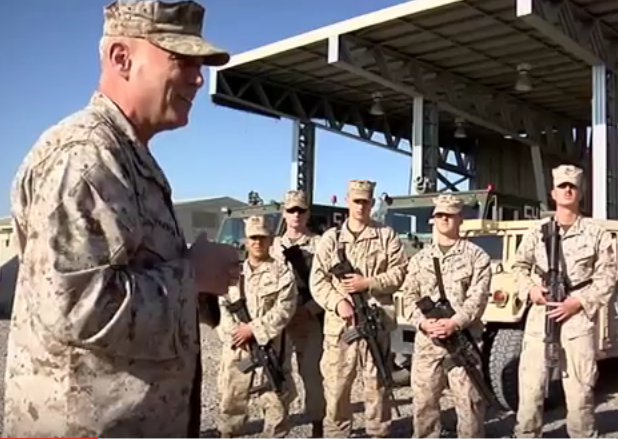 Last week I wrote about the fact that Navy SEALs are forced to share combat rifles, are short on live ammo for training, and are purchasing their own gear.  This week, assistant commandant of the United States Marine Corps, General John Paxton, told Congress that he does not believe the Marines are ready for another war.

The Stars and Stripes reports:

If the Marines were called today to respond to an unexpected crisis, they might not be ready, a top Marine general told the Senate Armed Services Committee on Tuesday.

Gen. John Paxton, assistant commandant of the U.S. Marine Corps, testified to lawmakers that the Marines could face more casualties in a war and might not be able to deter a potential enemy.

“I worry about the capability and the capacity to win in a major fight somewhere else right now,” he said, citing a lack of training and equipment.

Paxton, along with the vice chiefs of the Army, Navy and Air Force, spoke to the Senate committee on the readiness challenges facing each service after 15 years of war and recent budget cuts.

If you are not familiar with General Paxton, please take a look at the following video.  I first saw this a few years ago and really loved his style and his obvious commitment to the Corps and to his country.

For the Marines, [General Paxton] said units at home face the most risk because of fewer training opportunities with the best equipment deployed with forces overseas. And it would be these undertrained home units that would be called to respond to an unexpected crisis.

“In the event of a crisis, these degraded units could either be called upon to deploy immediately at increased risk to the force and the mission, or require additional time to prepare thus incurring increased risk to mission by surrendering the initiative to our adversaries,” Paxton said. “This does not mean we will not be able to respond to the call … It does mean that executing our defense strategy or responding to an emergent crisis may require more time, more risk, and incur greater costs and casualties.”

Asked about the increased number of aviation training casualties and the correlation to spending cuts, General Paxton responded, “we’re worried.”

The Stars and Stripes reports:

Paxton was repeatedly questioned about the Marines’ ability to respond to contingencies after the high number of training accidents its aviation squadrons faced in the last year. The collision of two Marine Corps’ CH-53 Super Stallions off the coast of Hawaii in January raised questions whether budget cuts were leading to a higher number of pilot and crew deaths.

On Tuesday, Paxton said the service is looking at whether there is a connection.

Here’s another video of General Paxton addressing the 2015 “If not me, then who” gala:

If General Paxton is worried, I am worried.

So, the “Marines are not ready” to fight another war?

In this Administration, this is a feature, not a bug . . .

I’m sure they’re ready to battle AGW and Islamophobia?

And fundamentalist Christians and Jews. And conservatives. And peaceable gun owners. And “open borders” opponents. And whistle-blowers. And journalists who don’t mindlessly parrot The Narrative(TM).

And anyone else the Administration points fingers at, but who does not actually pose a direct threat to the United States. We can’t fight direct threats; we’re not allowed. Because diversity and tolerance.

They need to get back to the MEU concept of hit’em hard and fast, kill those needed killing and go back aboard for hot chow.

The ability to deliver unlimited amounts of manpower to the fight is a weapon in and of itself. Case in point: The fate of the German Army, the best equipped, best trained, best lead, most experienced, possessing the finest tactics and highest morale of any army in the world, after June 22, 1941, the day it invaded the Soviet Union.
There’s no other foe in the world today that Buraq Hussein Obama would prefer to surrender the United States to, militarily, economically, politically, than Russia or the Chinese Peoples Republic, with the possible exception of the Worldwide Islamic Caliphate.

But will there be a sufficient number of gays, Muslims, women and atheists? Priorities.

This is Chairman O’s variance on “Leading from behind”: Leading to behind!