Promises to use his time to mock Trump 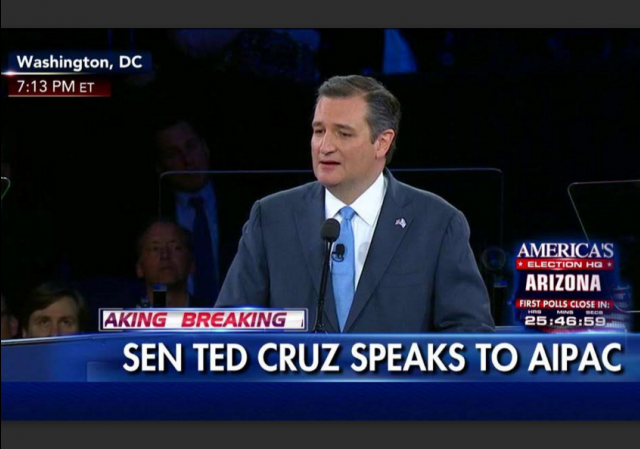 Sen. Cruz vowed to use his speaking time at AIPAC to mock Donald Trump for skipping out on tonight’s originally scheduled Fox News Debate:

Trump said earlier in the day that he would not participate in the Fox News debate in Utah on Monday, and John Kasich quickly said that he wouldn’t attend if Trump didn’t. Later on Wednesday, Fox News formally canceled the event.

Trump said he would use his time instead on Monday to address a conference hosted by the American Israel Public Affairs Committee, the prominent pro-Israel group. Cruz’s campaign said in a statement Wednesday that Cruz would use his time at the same conference to “highlight Trump’s positions — or lack thereof — in front of the thousands of AIPAC members in attendance.”

“Let’s be intellectually honest about what’s going on here — Donald Trump is scared to debate Ted Cruz next week,” Cruz spokesman Ron Nehring said in a statement. “Perhaps Mr. Trump is unable to speak for more than one minute about any given topic because of his shallow understanding of basic policies, or perhaps he is scared of voters learning the truth — that he has spent his entire adult life promoting liberal positions completely opposite of the conservative platform that he has campaigned on.”

“Mr. Trump, if you won’t debate in Utah, we’ll bring the debate to you,” Nehring added.

Appearing later Wednesday evening on Fox News, Cruz charged that Trump specifically chose to speak at AIPAC’s conference on Monday, rather than on a different date on the multi-day conference, in order to create a reason to miss the Salt Lake square off.

“His excuse is silliness,” Cruz told Megyn Kelly. “He chose to speak right in the middle of the debate, because he’s scared of debates.”

Applause for Cruz, as he enters, notably quieter than applause for Trump. He's more right-wing than this crowd usually supports

Cruz will surely not use a script but I can predict his opening: "God bless AIPAC."

.@tedcruz: "America and Israel are in the fight together against radical Islamic terrorism." #AIPAC2016 pic.twitter.com/eZ5BgwYZQV

Difference between what @tedcruz 's sayin & what @realDonaldTrump read that someone wrote for him?Cruz actually understands what he's saying

"As president, I will not be neutral." @tedcruz reminds #AIPAC2016 of Trump's previous neutrality pledge

.@tedcruz: “America will stand unapologetically with the nation of Israel.” #AIPAC2016 #Greta pic.twitter.com/ZELJ3w758h

I love @TedCruz and have no doubt he loves #Israel, but this is basically a rehash of talking points from the past several months/yrs #AIPAC

Cruz vows to defund any university that participates in BDS movement

Cruz leaves to a standing ovation after a strong speech to AIPAC.

Every time Sen Cruz uses the phrase “radical Islamic terrorism” he tells me that his head is submerged in a pool of excrement.
And that’s the most benign interpretation of his propaganda I can muster.
He is so OBVIOUSLY playing to the ignorance of the unwashed masses it boggles the mind.
He thinks the American people are not ALERT to the THREAT posed by ISLAM qua Islam.

‘Tis stunningly true that Cruz’s DISCIPLES are brain dead, and such a pity for that.

BUT *HE* MAKES ME WANT TO PUKE.
No wonder Mr. Trump labels him Lyin’ Ted.

(Remarkably Cruz also did this in his AIPAC speech, to the same audience who had heard different from Trump.)

Meanwhile, Cruz also spouts typical politician pander, and I for one am sick of lies. Yeah, right, sure, he’s going to abolish the IRS. That’s an idiot sound bite. Or he’s going to “tear up” what is not even a contract on “day one”. I can’t stand this kind of meaningless rhetoric. Trump doesn’t do this.

“The wall” was a Ted Cruz issue years ago when Mr. Establishment was supporting the Gang Of Eight with his contributions, and meeting with Dreamers.

“Trump doesn’t do this.”

That’s because Trump won’t take a hard stance on anything. When you support both sides of every issue it is kind of difficult to say definitively what you will do. Of course you won’t be able to complain that he didn’t give you what he said he would if he becomes president either.

So the fourth-grader narcissist fabricates a series of untruths about a real conservative and devout Christian, Ted Cruz. and the Trump Hive Mind sings along. No proof provided but the carny barker said it was so. Sad that the education system in this country has downgraded the selection of the President of the United States to emotionalism and name calling.

Why are all of these liberals suddenly visiting conservative websites to spit on Ted? And why are these so-called angry populists so stupid about who Donald Trump is and what he is not – a smart businessman.

Perhaps its his short sentences and four-letter word vocabulary, and his repeating points often are serious indications of dementia. The Donald is turning 70 very soon.

Then go ahead and puke; you clearly need a cathartic release.

And I will do so all over you. Punk.

Those in attendance certainly seemed to think so too, judging from the applause.

I saw three headlines. AIPAC lrespoded warmly to Trump’s speech. And to Sen Cruz’. And to Hillary(!).
That last is amazing. She was Sec’ty of State for Obama and his policy to cut support for Israel.
Those guys are pretty polite.

Hillary’s speech sent a thrill up my leg!

Would you say it was a ‘tingle’?

As always, Cruz was brilliant! Statesmanlike, informed, and both cogent and conservative. Presidential.

Just one point: how is it “mocking” to address issues and counter viewpoints in a speech when an opponent RUNS IN FEAR, like a scared brat-bully who has punched the other guy but can’t take anyone fighting back, even VERBALLY?!

Kemberlee, Kemberlee, Kemberlee. How shallow, or naive, you must be. It isn’t mockery (here is the definition, just in case you forgot what the word REALLY means); it’s called civil debate – only in this case, it is point-counterpoint via speech, since the fraidy-cat bombastic bully runs away from a one-on-one formal debate forum.

Are you still stuck on Rubio – or is it Kascih you now favor? Or….have you gone over to the dark side and gone all-in for Donald “Flexible” Trump? Your bias shows, once again…….

An aside – I notice the Trump-trolls are her en masse.

I love how they use the thumbs-down to reveal who they are…..aside from the snark and ad hominem posts. (Yes, HarrietHT, I’m talkin’ to you….)