A fair point or political gimmicks? 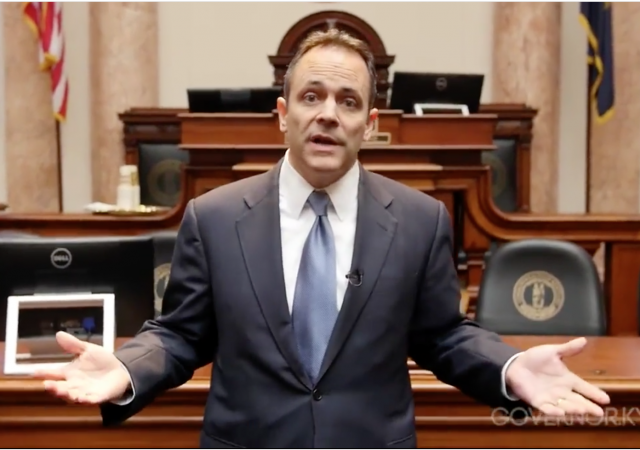 Monday, Kentucky Governor Matt Bevin had a camera follow him to the State House to check on the progress of the state budget. At 11:00 on a Monday, the chamber was completely empty. Governor Bevin implored state legislators to “get to work,” citing a mere nineteen days left in the legislative session.

Democratic lawmakers were not thrilled with the Governor’s “reporting”, and fired back:

Bevin claims legislators work less than an hour a day and says the people of Kentucky want solutions to the state’s financial problems.

Kentucky House Democrats fired back with a picture of House Leaders in the Capitol Annex, working on a transportation budget. The post included a response saying the annex is across the street from the Governor’s office. While Gov. Matt Bevin was making a video this morning, House Leaders were busy working on the Transportation budget in the Capitol annex – right across the street from the governor’s office.” They add, “If he needs help finding his way over here where members of the House are working to fix this budget, we’d be happy to send help,”

Speaker Greg Stumbo said the governor is too busy playing tv reporter to answer budget questions lawmakers have been asking for weeks. He also says the average date for the House to bring out the budget is March 11. Stumbo’s post said “it’s unfortunate he doesn’t know that there are committee meetings daily before Session convenes. In order for Bills to become laws, every single one has to go through a process. Over 1000 bills were filed this Session alone.”

Bevin refuses to borrow from future generations to pay for the problems of today and proposed 9% funding cuts.

But the uncertainty over the balance of power in the Ken­tucky House and the nature of Bevin’s budget proposal make it difficult to figure out where this budget is headed and raise the question of whether the House and Senate can reach a final agreement before their April 15 deadline.

So, with 36 days already con­sumed in a legislative session that lasts just 60 days, here are some answers to your questions about where the 2016-18 budget bill — House Bill 303 — stands.

Q. Has Bevin been moved by the outcry of folks saying his cuts would reverse gains in postsecondary education, hurt public schools, close courts for at least three weeks, and impair myriad state services?

“His position on everything in the budget remains un­changed,” said Bevin Budget Director John Chilton. “The cuts are not something the gov­ernor necessarily sees as desir­able, but are necessary to accu­mulate funds to deal with the pension issue.”

The administration believes unfunded liabilities of more than $30 billion within state pen­sion funds pose a crisis that must be addressed in a major way in this budget, which Bev­in’s budget does with additional $1.1 billion in appropriations.

“The pension issue is the fo­cus of the whole budget,” Chil­ton said. “… If it’s not addressed now, it will grow so large that it can’t be coped with.”

Yes, the General Assembly always changes the budget. The second part of that question is much harder to answer but it seems more likely than not that lawmakers will at least ease the pain in some areas. Many Democrats on the House budget committee have endorsed and echoed the argument that particularly the education cuts would be a serious setback. Rep. Rick Rand, the Bedford Democrat who chairs the House budget committee, said his committee is looking for possible relief from $1 billion in unspent funds in the Bevin budget “to see if some of that can be invested in important programs now.” Rand is referring to a beefed up Rainy Day fund proposed by Bevin to guard against possible revenue shortages and a new half-billion dollar “Permanent Fund” Bevin proposes for future outlays addressing the pension crisis. As to how far his committee can go in restoring money Bevin proposes to cut, Rand said, “I don’t know at this point. … We’re not in a position to make that call just yet.” House Speaker Greg Stumbo, D-Prestonsburg, said Friday that the House budget may borrow about $300 million to fully fund the socalled ARC (actuarially required contribution) in the next two years for the Kentucky Teachers Retirement System. For all Bevin’s budget provides in new cash appropriations for KTRS, it does not fully fund the ARC. House Republican Leader Jeff Hoover, of Jamestown, said of the Bevin budget: “There have been concerns expressed. Hopefully as we go through this process we can flesh some of those out and see if we can make it more palatable for some folks.”

Not from Kentucky, why is there “uncertainty regrading the balance of power in the legislature”? Is that just because of an election year or what?

It’s divided, so it’s not possible to enact a broad agenda. It will be an issue-by-issue slog, needing Democratic support on each.

Why does it say Matt Bevin, moron. on the top left of the video?

It was signed by a demorat?

It looks to me like another case of the ‘rats giving the middle finger to the ‘pub(s) and the ‘pubs whining while they stand still with feet of clay and take it.

Grandstanding stunt. In most states, the chamber is for voting and formalities, and the real work is done in committee meetings and less formal meetings in legislators’ offices.

Bevin, of course, knows this fully well, but it probably plays with the ignorant among the citizenry. It is unlikely to cost anyone their seat, though, and more likely to cause resentment and make legislators of both parties less anxious to accommodate the jerk’s priorities.

A smart rule of business and politics is: Don’t tick off the people you will need to help implement your plans.

“A smart rule of business and politics is: Don’t tick off the people you will need to help implement your plans.”

Bevin is good; I wish he’d have beat McConnell.

It was a cheap stunt. He knows very well that they don’t “work less than an hour a day”, and that even when the house is in session it’s usually almost empty because their real work is not to be there. I wish him well, but this sort of thing cheapens him.

I don’t have a problem with him using the lefts own tactics against them.

KY R’s have the Governor’s office and a 27-11 supermajority in the Senate.

What the Governor is doing here is great theater. Every election in the state is huge now, until the D’s finally (and probably for decades, at least) lose control of the House and the R’s can get to work fixing the damage they’ve done over the past few generations.

Ahhh, Yea we went through a similar process here in Arkansas over the past few election cycles, unfortunately we didn’t get a strong conservative republican gov. we got a big government establishment gov.

the democrats are trying to replicate the budget process at the federal level of threatening a government shutdown every year and blaming stubborn republicans for the shutdown. Charley Brown republicans cooperate with an obligatory prat fall.