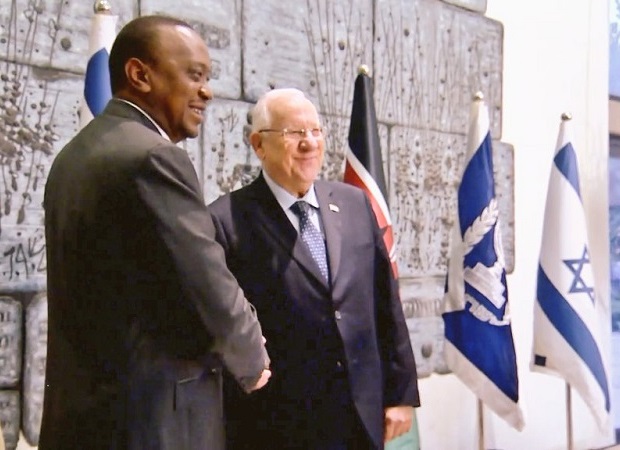 Today, the State of Israel is fulfilling Herzl’s dream in the continent of Africa.

Now the Jewish State is seeking to renew its historic bond with the African continent.

Last month, Israel’s Prime Minister Benjamin Netanyahu announced his plans to visit Africa soon, first Israeli leader to do so in last 50 years. “Israel is coming back to Africa. Africa is coming back to Israel. It’s happening in a big way,” Prime Minister Netanyahu said while addressing a gathering of envoys from African countries, “It’s happening now because it’s so clear that it’s good for Africa and good for Israel.”

Prime Minister Netanyahu was reacting to an invitation extended to him by the visiting Kenyan President, Mr. Uhuru Kenyatta. The visit is expected to take place around the 40th anniversary of the raid on Entebbe. The Operation Entebbe was a counter-terrorist mission conducted on July 4, 1976 to rescue 106 Israeli hostages held in Uganda. The trip will be of great personal significance to Prime Minister Netanyahu, whose brother Lt. Col. Yonatan “Yoni” Netanyahu’s was killed while leading Israeli Special Forces against Palestinian and international terrorists in that legendary operation.

Agriculture is at the heart of Israel’s involvement with Africa. Israeli experts combine agricultural innovation with local farming practices to produce better yields. As a Jerusalem Post correspondent discovered during his recent trip to Senegal in West Africa:

Two hours east of Dakar, in the village of Darou Fanaye far removed from the electricity and paved roads of the capital, a large, square field has been fenced off. Dozens of families are busy tending their newly planted green onions and okra sprouting from the ground in long rows. Under a joint Israel-Italian-Senegalese project, this farm will provide 1,000 square meters (0.1 hectare) to 50 families. Each parcel produces several tons of food a year in four to six harvests.

Drip irrigation tubes line the landscape, and the farmers are proud of their accomplishments.

With support from the Agriculture Ministry, Israel plans to aid 4,000 similar small family farms. For the local Senegalese, there is excitement.

According to Jerusalem Post, More than 600 students have travelled to Israel for training in agriculture and other fields from Senegal, a country with over 95 percent Muslim population.

This week, Director General of Israel’s Foreign Ministry, Dore Gold was in South Africa on a 3-day tour. In recent years, South Africa has been emerging as a hub for anti-Israel activism — often backed by local academia and members of the government. Israel is offering country technological cooperation in critical areas like drinking water, agriculture and high-tech to mend strained ties:

“The meetings [with South African officials] were a very important start. To say that we’re about to have a completely different relationship is premature. But there was a readiness to hear our arguments,” [Dore] Gold told The Times of Israel. “There’s potential. Now, everything is in the follow-up.”

Since 1990s, Israel has forged fresh alliances with strong partners throughout Asia and Africa. This diplomatic shift has not only significantly increased Israel’s commercial relations and trade volumes with these countries, but also created long-term partnerships in the field of agriculture technology, water management, renewable energies, healthcare, higher education, industrial research and counter-terrorism.

Never before since its re-establishment in 1948, has the Jewish State enjoyed such strong and diversified commercial and diplomatic relations throughout the world.

Nigeria is a country that had a France sized population of 45 million people in 1960.

The United Nations projects that Nigeria will have almost a BILLION people in 2100, thanks to the population boom and improved medicine.

If the GDP/standard of living of Nigeria can be raised to Jamaican levels, then Nigeria will be a world superpower.