“The shield his cis white male identity provides here in America is not teflon abroad.” 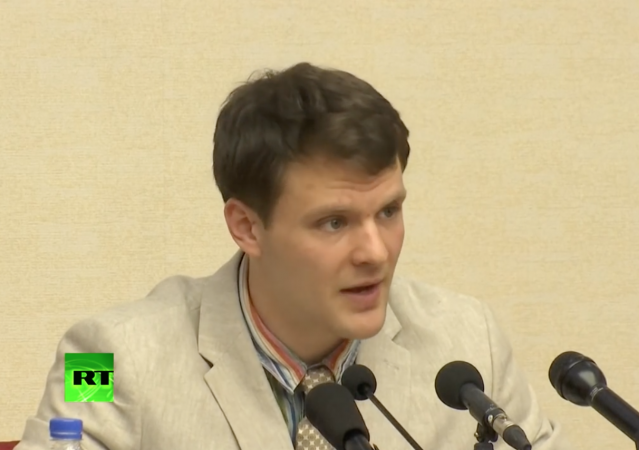 A writer for the Huffington Post named La Sha has found an upside to the story of the American college student being imprisoned in North Korea. He’s finally been stripped of his white male privilege.

I wish I could say this is parody, but it isn’t:

North Korea Proves Your White Male Privilege Is Not Universal

“That’s what the hell he gets. Good for him!” My mother had uttered those words in her typical matter-of-fact tone one morning as she watched the news. “He” was Michael Fay, an 18-year-old from Ohio who had confessed to vandalizing cars in Singapore, and was subsequently sentence to six lashes from a rattan cane. I was in sixth grade and all I could imagine was how horrible the pain would be. My mother was unmoved at the thought, remarking, “He earned that.”

I thought about my mother’s words a few days ago while watching video of 21-year-old Otto Warmbier, another man from Ohio who last week was convicted of subversion for stealing a propaganda banner in North Korea, and sentenced to 15 years hard labor. Just as in Fay’s case, I was shocked by the severity of the punishment. I’ve tried to imagine spending a decade and a half performing what the North Korean state deems hard labor and I can’t. But I’m not 11 anymore, and now, my mother’s callous reaction to Micahel Fay’s sentence is my reaction to another young white man who went to an Asian country and violated their laws, and learned that the shield his cis white male identity provides here in America is not teflon abroad.

The writer, who is a black woman, even compares his imprisonment in North Korea to her life in the U.S.

What a mind-blowing moment it must be to realize after 21 years of being pedestaled by the world simply because your DNA coding produced the favorable phenotype that such favor is not absolute. What a bummer to realize that even the State Department with all its influence and power cannot assure your pardon. What a wake-up call it is to realize that your tears are met with indifference.

As I’ve said, living 15 years performing manual labor in North Korea is unimaginable, but so is going to a place I know I’m unwelcome and violating their laws. I’m a black woman though. The hopeless fear Warmbier is now experiencing is my daily reality living in a country where white men like him are willfully oblivious to my suffering even as they are complicit in maintaining the power structures which ensure their supremacy at my expense. He is now an outsider at the mercy of a government unfazed by his cries for help. I get it.

This is what passes for writing at the Huffington Post? Stunning.

Twitchy has rounded up some reactions to the piece:

This just might be the dumbest thing ever written. https://t.co/HC6FHPBCVJ

@mcmoynihan Speechless. I'm afraid if I click on the article it will induce a "Scanners" head implosion within 3 seconds of reading.

@mcmoynihan incorrect, the authors bio is the dumbest thing ever written (in context with the piece) pic.twitter.com/ztNYSIflDb

La Sha, darlin’, you need to stage your own jail-break.

Get thee hence. Do it today! No need to suffer another hour here!

(Actually, you phenotype enjoys the real privilege in racist America, and it does so because the Collective is fundamentally a racism propagation machine.)

The hopeless fear Warmbier is now experiencing is my daily reality

The “daily reality” for an educated middle-class black woman in America is equivalent to life in a North Korean forced labor death camp? Has anyone approached Michelle Obama or Oprah for comment?

I don’t think their security allows you to get close enough to ask unscripted questions of either person.

Being black is the same as 15 years in a Nork death camp. Who would have guessed it?

As if she had to survive on rat stew. What an ignorant idiot she must be ~

INSANE! Nothing more to say!

La Sha is not stupid: she is evil.

She excuses profound injustice, based on her racist and sexist prejudices. Her reaction is unAmerican.

She’s evil, but she is also stupid and ignorant.

North Korea has a fundamentally “race-based” worldview, in which they consider themselves as the superior race. They are so obsessed with blood purity, that women are even forced to abort “mixed blood” children.

This is what they call President Obama, in official, state run media:

– a crossbreed with unclear blood
– a clown
– a juvenile delinquent
– a dirty fellow
– wicked black monkey
– somebody who does not even have the basic appearances of a human being.
– still has the figure of a monkey while the human race has evolved through millions of years.
– It would be perfect for Obama to live with a group of monkeys in the world’s largest African natural zoo and lick the breadcrumbs thrown by spectators.

Can a black woman be considered a “special snowflake” or is that racist?

Sorry but “Special Snowflake” is a “trigger” word!
I feel so threatened! Where is my safe place?

See that 6 lane free way? The middle of that could be your safe space.

The guy deserved what he got for being an idiot.

If she thinks “white privilege” didn’t count in this case, she should do the same thing. She would be lucky to only get twice as much time.

Come on, Rod. You can’t mean that! 15yrs (hard labor) for stealing a banner? While every country has the right to their own laws and penalties, there are many countries who are guilty of human rights violations. Excessive and inhumane treatment should still be a concern.

I guess one would say that he’s lucky they didn’t cut off his hand as is practiced in the Middle-East.

The idiocy though is in the idea that anyone would make a “tourist” trip to North Korea. Was this a UVA sanctioned trip? Isn’t North Korea a “no-go” country?

Hey, Rod’s a Trump voter. Stupid is his forte.

Hey, why not just punish people with low IQ if you think 15 years is justified simply for being young and dumb?

The United States would have every right to invade and make it a territory or colony, to free North Koreans from starvation and worse.

another racist self identifies …

The internet has turned out to be a great platform for people with a burning desire to prove their stupidity.

They don’t get any lower than that.

I’m starting to realize many of these justice warriors have decided (only in their own minds) that another path to getting what they want is to write with flourishes. To get attention. So, being highly controversial and abusing metaphors and hyperbole is just a scheme. At least for some.

Even the BLM protesters tested using language just to get on TV, I think.

She’s a liar with a column. If she truly thought that being black in America was equal to a Nork death camp she would have fled to Mexico or Canada years ago. The Underground Railroad would still be going strong.

Instead she’s a ‘journalist’ or ‘blogger’ whatever she labels herself with a byline in a large mainstream leftwing publication. Everybody and anybody who is masochistic enough to want to read her drivel can do so. How many columns will this kid get to write or even read while he’s there.

I’d be interested in comparing the weight of the two of them after a year or so. What’s the odds the guy will be skin and bones? She on the other hand would have to wire her mouth shut to starve to death in America.

When my grandfather was laid low by asbestos and he had to retire from the shipyards we lived off what my brother and I could fish or shoot our garden and the apple crate sized box of food we received from the county. We didn’t starve. That was almost fifty years ago. I doubt they provide less food today.

Thank God the norks usually are just doing this for the propaganda. They’ll probably let him go after a year or two. It’ll be hell but with God’s grace it won’t be fifteen years.

La Sha needs a very hard smack in the teeth with a rifle butt.

However, a week in a concentration labor camp might do her attitude wonders…

Well, La Sha has proudly identified herself as a virulent racist, so I would encourage everyone to treat anyone like her as persons to whom nothing is owed. If they are in need of life-saving aid, pass them by just as you would refuse to give aid to a militant Nazi.

“The internet has turned out to be a great platform for people with a burning desire to prove their stupidity.”

La Sha is not subsisting on grass and tree bark. She does not drink water from mud puddles. She does not pick undigested kernels of corn from cow dung.

La Sha does not work 15 hours a day in a coal mine. She does not work 100 hours a week in a rice paddy. She gets to keep what she earns at HuffPo, minus modest taxes.

La Sha is free to move about the country, write whatever she wants (as evidenced by her column), and speak out as she pleases without fear of imprisonment.

So no, I don’t think what La Sha is going through in an American life compares to what Michael Fay is about to experience in a North Korean concentration labor camp.

How am I to teach my children that Blacks are just as able and intelligent as anyone, if they insist on going off like a retard?(Yes cognitive deficient,intellectual disability, it’s exactly what I mean)
HUffpo showcasing this ‘talent’ is not helping.

Yo, La Sha!! Drag your “ass of color” to Somalia….just for shits and giggles….. Then post up on HuffPoop ’bout your experience 😀 😀 😀

Don’t you guys get it yet? THERE IS NO La Sha. This was written by some leftist POS just to poke you in the eye.

La Sha might actually be a straight, white male born and raised in Kennebunkport.

Click through to the article and read the comments on Huffpost. The commenters there aren’t buying it either.

Best: “Give the lady a break; those hobbyhorses won’t rock themselves, you know.”