When reporters don’t know they’re on the air… 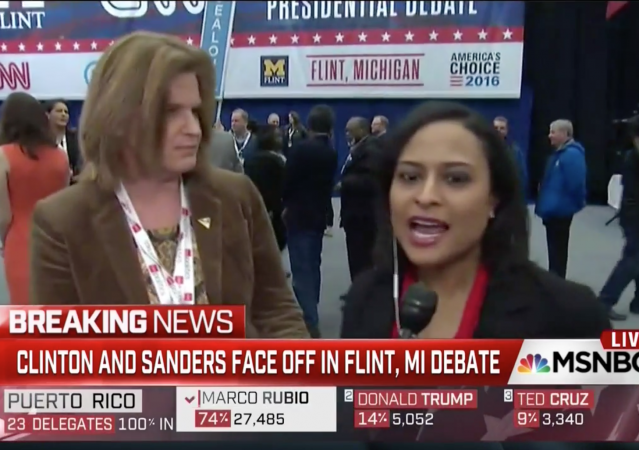 After Sunday night’s CNN Democratic debate, MSNBC reporter Kristen Welker either could not or did not hear studio anchor Ari Melber telling her she was live and on the air. Unbeknownst to Welker, her mic was on, which allowed the entire broadcast audience to hear Welker feeding questions to Jen Palmieri, Hillary Clinton’s Campaign Director of Communication.

Palmieri called the Clinton and Sanders exchange “fiery” and then kept mispronouncing “substantive.”

Welker stopped after Palmieri’s first response to confirm Melber was able to hear their interview and then started from the beginning. More fiery. More bastardization of “substantive,” more MSNBC.

Don’t make me pull out that Casablanca clip… 🙂

MSNBC is the gutter trash of ‘reporting’.

Just like the New York Times, it is kept around ONLY because rich liberals are willing to lose a large amount of money to be able to put out propaganda.

If MSNBC were actually forced to act like a business it would have gone bankrupt over a decade ago.

Liberals? How about the U.S. government. There are not enough viewers to sustain MSNBC’s existence. It is a propaganda tool of Obama/Jarrett and the democrat party.

Obama’s favorite CEO gets GE out from paying any US taxes:
http://hotair.com/archives/2011/03/25/obamas-favorite-ceo-gets-ge-out-from-paying-any-us-taxes/

We are in the fell clutch of big media, but fighting to be free of them. It won’t be easy.
This morning my computer was down, so I turned on FoxBiz to see what the market was doing. Across the bottom of the screen was the message: “Awaiting Trump Rally in Florida.”
That must be part of Lou Dobbs’ shameful pimping for Trump. The media does not even make a serious attempt to hide their biases.

The rest of Fox is in the tank for the GOPe.

She was obviously hearing the delayed broadcast feed in her earpiece instead of the live feed.

Doesn’t change the unethical conduct, just explains how she got caught.

I’m not sure I can get worked up over this. Sounds like she was just giving an overview of the general topics.

Not sure that I see any controversy either. They were covering the discussion topics, like doing the pre-interview for a talk show. Now, it the reporter had been feeding her the answers, that would be worth noting. It’s not like anyone doesn’t already believe that CNN is in the tank for Democrats.

“Journalists” aren’t called “democrat operatives with a byline” for no reason, ya know.

Rethugs clucking their tongues, meanwhile, are busily trying their best to steal it all away from Trump, which he’s won fair and square. Pot, kettle.

Journalistic ethics is an oxymoron!

Conspiracy. It’s real and universal. Watch for correlations of special and peculiar interests, and, of course, principles, which are valuable predictors of orientation and behavior.

Principles are evidence of orientation and predictors of behavior.