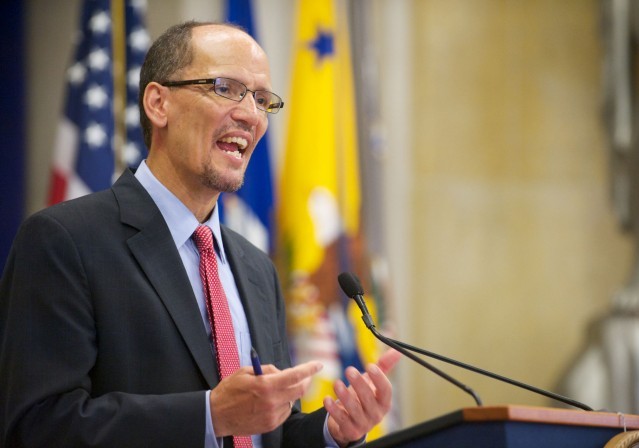 While early reports of a potential Hillary VP pick centered on former San Antonio mayor Julian Castro, top Democrats in the (increasingly large) progressive wing of the party are reportedly rallying behind a relatively unknown, but reliably progressive, Tom Perez to run as Hillary’s VP.

Who is Tom Perez? Listen:

Aside from the wonkiest of Washington circles and the most progressive corners of the left, no one’s heard of Tom Perez. He isn’t young or handsome. He has zero foreign policy experience. The highest office he’s been elected to is a suburban county council.

Yet the labor secretary has emerged as a sleeper pick for vice president, with chatter building among top Democrats — including Elizabeth Warren.

The Massachusetts senator and a few of her colleagues were standing around on the House floor in late September after Pope Francis’ address to a joint meeting of Congress, playing the Hillary Clinton running-mate guessing game.

Politico goes on to concede that Perez seems like a long-shot given his lack of experience, calling the idea “inconceivable.”

The Perez buzz is beginning to spread. Many top aides in the White House, when they talk about the VP pick, talk about Sen. Tim Kaine (D-Va.), a friend of President Barack Obama who is widely admired in the West Wing. The most they were thinking about Perez running for office was for Maryland governor in 2018.

But over beers, some of the rank-and-file White House staffers who are part of what’s been referred to as the “cult of Perez” see things differently.

“My strong guess,” one White House aide said, “is that if you took a straw poll of staffers here about who they’d pick for the ticket, Tom would do very well.”

The idea of Perez making the leap to vice president is, on the face of it, inconceivable: Aside from his limited experience in elected office, it’s not as though Clinton would need him to win Maryland or the couldn’t-be-more-liberal D.C. suburb of Takoma Park, where he lives.

Apparently, though, there is a great deal of support for the idea amongst the current administration and the (rest of the) far left progressive wing of the party.  Perez is reportedly beloved by unions, “adored” in the White House, and a committed progressive who would keep Hillary from moving from some of her recent far-left positions.

Listen to him address a 2014 labor convention:

Except that Perez has more credibility with committed progressives — who measure politicians by their battle scars — than almost anyone else around. The unions love him so much that they campaigned against his nomination to replace Eric Holder as attorney general in late 2014 because they didn’t want to lose him at the Labor Department.

He’s spent years working at the Justice Department on voting rights, civil rights and police misconduct, right in the center of issues that have exploded among African-Americans and progressive Democrats. He’s adored in the White House, where he’s been a main player in crafting the Obama second-term domestic agenda, and he’s got a knack for a fiery stump speech. Also, he’s Dominican. And unlike Housing and Urban Development Secretary Julián Castro, the other Latino Cabinet secretary and more frequent subject of VP speculation (to whom nearly every conversation about Perez becomes at least an implicit comparison), Perez speaks fluent Spanish.

While all this sounds wonderful to progressives, there are some serious problems with Perez that the average Democrat voter and the majority of Republican voters will find troubling.

The Washington Free Beacon details five scandals that could hurt a Democrat ticket that includes Perez, including his role in dismissing voter intimidation charges against the Black Panthers who infamously stood outside Philadelphia polling places while brandishing nightsticks, his belief that white people deserve no protections under the Voting Rights Act, and his own use of a private email address to avoid accountability.

However, Perez’s nomination and tenure as labor secretary have been rife with controversy. Several GOP sources told the Washington Free Beacon that they would welcome Perez’s entry to the race given his checkered history, which they say would hamper Clinton on the campaign trail.

Here are five scandals that could come back to haunt the Democrats if they select Perez as vice president.

. . . . In 2008, two men from the New Black Panther Party, one brandishing a nightstick, stood in front of a polling place in Philadelphia and became aggressive when a video tracker asked them what they were doing. The Department of Justice had a straightforward case against the two, according to former attorney J. Christian Adams, until Perez, then head of the agency’s Civil Rights Division, intervened. Adams resigned in protest after the charges were dropped. He called Perez the “most extreme cabinet nominee” he had ever seen.

. . . . .  An investigation into the Civil Rights Division by the Department of Justice’s inspector general revealed extreme views held by Perez. He told investigators that white people were not entitled to protection under the Voting Rights Act.

. . . .  The House Oversight Committee found that Perez engaged in a quid pro quo that cost taxpayers $200 million in order to prevent a discrimination case from reaching the Supreme Court.

Perez pressured underlings to cover up the deal by omitting any mention of the reasons behind the decision. “Mr. Perez inappropriately used a whistleblower as a bargaining chip,” said Rep. Darrell Issa (R., Calif.), the committee chairman. Issa said the deal was “arranged to ensure an ideological pet policy of the Obama Administration would avoid Supreme Court scrutiny.”

. . . .  Perez would be a fitting running mate for Clinton given his use of private email to dodge accountability laws and his refusal to surrender potentially damaging material to the public.

. . . .  Perez has insisted that the Labor Department is not legislating from the executive branch or coordinating with other labor regulators to push workplace rules that crack down on franchising. However, Perez came under fire when congressional investigators discovered coordination after uncovering files from the National Labor Relations Board (NLRB)—records that did not turn up in Perez’s submission to the committee.

According to Politico, Hillary has been warming to Perez recently.

Clinton, who hasn’t spent much time with any of the people being talked about as prospective running mates (the selection process is way, way down the road, people familiar with the matter say), has taken a liking to Perez and spent a fair amount of time with him, beginning with a long phone conversation wonking out on economic development and other progressive policy measures when she called to ask for his endorsement.

“I think I can do more service to you as a progressive validator than as a Latino validator,” he said, according to people who’ve recounted the conversation.

Perez had already been talking with the Clinton campaign for months, in touch with campaign chairman John Podesta, communications director Jennifer Palmieri, and senior advisers Jake Sullivan and Maya Harris as they developed the former secretary of state’s policies on voting rights, apprenticeships and police misconduct.

After Perez endorsed Clinton in Iowa, the two traveled together for a few days. At the second town hall they did together, Clinton kept turning questions over to him: “Tom, why don’t you take that one?” she’d say.

Hmm. He just might be ideal for progressives. Beyond being far left, he could also give Hillary more ammunition for her “vast right wing conspiracy” shriek for every crticism of him. And he would be a darling of a lot of media elites, especially the NYT.

last i heard, Antonio Villarboboso, former mayor here in Lost Angels was looking for another gig…

The best thing about bringing the Hispanic experience into politics is they can share all of the things that have made their home countries so rich, free, open and successful.

Maybe we can ask at a press conference why it is we have to go into these countries and force their citizens to leave their economic paradises and be forcefully carried across the border, against their will, into the U.S.

Perfect for Hillary — Unless Kasich lands him as VP partner first..

I just don’t see it. Hillary is going to have to be tacking sharply to the center after the nomination is sewn up, and adding this guy to her ticket would make that all but impossible. Sure, the kids running the White House love the guy, but they aren’t running for President, and, really, neither is their boss, President Obama.

“the kids running the White House…”

Man, did you nail it.

Faulty judgement and bad decisions are the hallmark of Hillary Clinton’s public life. What’s one more?