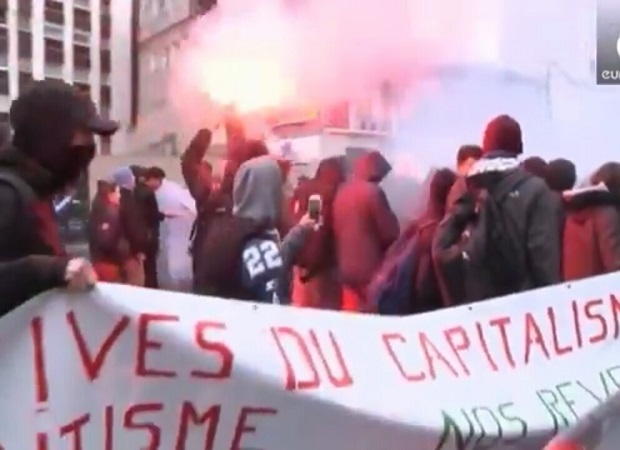 On Wednesday, March 9, 2016, France was hit by nationwide protests and rail strikes. Students teamed up with unions across France to protest against the proposed labour reforms, including the scrapping of 35-hour working week.

The 35-hour working week was one of those brilliant ‘social justice’ job creation ideas, crafted by socialists to compel businesses to hire extra employees to compensate for the lost working hours. Introduced more than 15 years ago, 35-hour week failed to have any impact on country’s unemployment rate.

The grim reality in France once again highlights that the European-style Welfare State championed by Bernie Sanders and others in the Democratic Party is a recipe for an economic disaster. According to French government, 90 percent of the jobs created last year were “unstable, poorly paid and short term”.

This is not the first time government in France is trying to push for labour market reforms. 10 years ago, President Jacques Chirac was forced to roll back his reforms after of massive protests.

As usual, the Left was ready to piggyback ride the public discontent and further its agenda of “anti-Capitalism” and “Class-Warfare”. BBC reports:

Protests have been held around France as unions and young people joined forces to show their opposition to proposed labour reforms.

Youth organisations and unions were demonstrating on the same day as a rail strike over a wage dispute.

The proposed law would remove some of the protection workers enjoy against being laid off, in a bid to encourage businesses to hire more people. (…)

This reform has crystallised all those forces on the left who, while feeling increasingly unhappy about the government’s drift, until now had no clear-cut issue around which to rally, our correspondent reports.

It was – to be only a little bit unfair – all the usual suspects at the Paris demo. Trotskyite students chanting against the patriarchy; anarchists; grizzled veterans of ’68; plenty of pensioners; theatre-workers. In other words the regular left-wing alphabetti-spaghetti.

But nothing drives the pampered European youth on to the streets like the fear of losing future welfare benefits.

Nearly half of the protesters where college and university students. They rallied on the streets with banners like “stop stamping on our right to a future”. The agitating students forced a total shutdown of France’s school system — blocking 90 percent of country’s 2,500 secondary schools.

The liberal education system of Europe has raised a generation ingrained with a deep sense of entitlement. They have been told how special they are, at the same time discouraging competition and the necessity to earn ones way to respect and social acceptability.

The attitude is not typical for France alone, but for the most of the Western Europe. The European Union designates overseas vacation as a Human Right and even wants to subside annual trips for pensioner, students and those who can’t afford it — at the expense of the taxpayer.

There could be some tough days ahead for France. According to union bosses the protests on Wednesday were “a warm-up” act ahead of a consolidated nationwide campaign.

[Writer is an Indian journalist based in Europe]

Did all the Editors at Legal Insurrection quit?

“the scrapping of 35-hour working week.”
“The 35-hour working week”
“Introduced more than 15 years ago, 35-hour week failed to have any impact on country’s unemployment rate.”
“the reforms threaten end France’s 35 hours working week”
“This is not the first time government in France is”
“his reforms after of massive protests.”
“Nearly half of the protesters where college and university students.”
“blocking 90 percent of country’s 2,500 secondary schools.”
“to earn ones way”
“but for the most of the Western Europe.”
“annual trips for pensioner, students and those”

It’s your job to water the money tree.

Moi? It’s not my job to water the money tree. It’s your job!

Let’s blame the govt., and riot instead.

Napoleon had a work ethic at least as opposed to today where they all cry at the drop of a “right” … Vive la grève!

Hmm. Crown me emporer and I’ll rule with an iron fist over the ash heap of revolution, then wage bloody wars with the other great powers across Europe setting the stage for the rise of a virulent militarized matrix of nation states poised to engage in the 1st world war as a ‘work ethic.’

They have been told how special they are, at the same time discouraging competition and the necessity to earn ones way to respect and social acceptability.

As with everything for the lefties, the complete failure of their ideas is, of course, never proof that the ideas are wrong. Always someone else’s fault, usually the scapegoat of scapegoats: Captialism.