“I don’t remember even meeting her.” 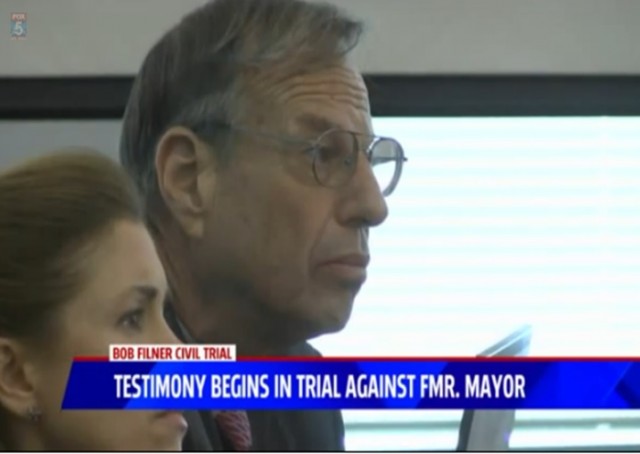 Bob Filner, the former mayor of San Diego and long-time Democratic Party politico, was forced to resign from office in 2013 when the trickle of sex harassment accusations from co-workers became a flood.

Nearly 3 years later, Filner is surfing on a sea of delusions, as he now denies these claims in court testimony related to a lawsuit filed by one of his alleged victims.

Former Mayor Bob Filner maintained on the witness stand Wednesday that he had not sexually harassed anyone while leading the city of San Diego, nor could he recall an encounter with a woman whose lawsuit alleges he put her in a chokehold.

I don’t remember the incident at all, sir,” Filner said as he was questioned in San Diego County Superior Court by a lawyer representing city employee Stacy McKenzie.

“I don’t remember even meeting her, sir.”

When asked whether he recalled putting his arm around McKenzie’s neck in April 2013 — an action described in court as a chokehold — Filner said he would not do such a thing. He also denied standing behind McKenzie during the encounter at a Mission Bay park, pressing his body against hers and brushing her breast with his elbow.

Court testimony did not include an animation of re-enactment of the Filner’s alleged actions that day:

McKenzie, on the other hand, certainly remembers Filner.

…He then came over and got close to her, inquiring whether she was married or had a boyfriend, according to McKenzie. She said Filner also grabbed her tightly at the wrists and asked if she would go to lunch with him.

“He said, ‘I want to make this perfectly clear — this is not a business lunch, this is a date,'” McKenzie testified. “I thought, ‘I have to get out of here.'”

She said she crossed the park and told two park rangers who work for her what happened. Filner joined them and put his arms around her from behind, and he pressed against her buttocks, she said.

“As he was starting to ask other questions, he started to drop (an arm) slowly,” McKenzie said.

The lawsuit was filed after the city denied a $500,000 claim by McKenzie. Her lawyers will decide how much in damages to ask for when they make their closing argument. Four other similar cases were settled for more than $1 million total.

During testimony, Filner called the day of his resignation “the saddest day of my life.”

For the rest of San Diego, his election was one of the saddest, and costliest, days in our city’s history.

So how can the prosecution go from “His word against hers with no other evidence” to “Guilty beyond a reasonable doubt” without a great deal of hand-waving and unsubstantiated supposition?

(I suspect the answer is “There are other witnesses” but there’s really no way to defend against an avalanche of charges like this IF you’re innocent and happen to have fallen into the crosshairs of a group who wants to see you in prison.)

Apparently there were plenty of observers. Certainly the local newspaper was full of it, once people started speaking up. The incident described above, for example, was in public, so there was lots of corroboration available. That’s why he was removed from office.

Even here….”Bob Filner, the former [democrat….sic] mayor of San Diego,…..”

Rabid: My bad. I fixed this issue. Thank you for bringing to my attention. 🙂

The annoying part of the Filner story is that not one single woman appeared to fight back. What happened to women who know how to slap a man? My mother and grandmother sure did, but then they weren’t “liberated” like all the Filner accusers. The saddest “victim” was Veronica Froman, a retired United States Admiral. That’s right, a U.S. Admiral who couldn’t find the courage to tell “Handsy” Filner to back off, and if he didn’t, kick him in the shins. She is a perfect example of how messed up our military promotion system is.