by the same people. 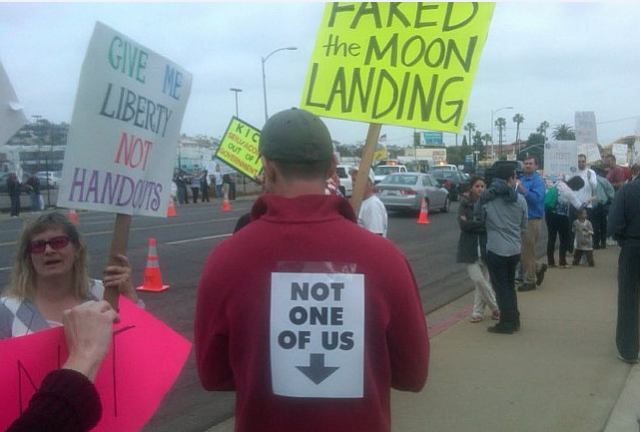 I knew that the 2016 election would be filled with black swans, events that deviate beyond what normally occurs during typical campaign seasons.

However, the disruption of Donald Trump’s rallies is not such a creature. Leftist operators have been a staple at conservative, grassroots events ever since I began organizing tea party rallies with our San Diego group in 2009.

During the first year of the Tea Party, for which we obtained all the necessary permits and arranged for top-notch security, among our most consistent attendees were progressive counter-protesters who blasted bullhorns during speeches given by our guests. When Tea Party didn’t disappear, anarchists in black coats began mingling with our crowds in search of opportunities to make trouble.

Threats of harassment cast a shadow on these events. The direction of the threats were always one way: Toward us, as a group of average citizens who were over-taxed, over-burdened by regulations, and over-tired of being dismissed by the establishment.

Perhaps the most chilling moment for me was when, after entertaining my independent conservative audience with a sprightly rendition of Sarah Palin, the progressives across the street actually thought I was the former Alaskan governor. The comments and threats from the counter-protesters were such that I was escorted to my car after the event by two dashing Marines.

Then, there was the Tax Day Tea Party of 2010. At that point, it was obvious that our events were going to be the target of event crashers and we pre-planned accordingly. We had signs printed up that would identify infiltrators, and videographers who would record their shenanigans.

In 2012, we had an encounter with a movement that seems to have evolved into “Black Lives Matter”, when Rev. Jesse Lee Peterson (founder of B.O.N.D. and the South Central LA Tea Party) was speaking at a Tea Party event. His topic was the courage in the face of false charges of “racism” bandied about by our opponents.

It was crashed by 3 young African American men, who proceeded to mock Peterson and our group.

They caused a disturbance just as Rev. Jesse was wrapping up his chat. The three dragged in bags of hoods, Confederate flags, and racist signs into our conference center room. They were trying to, as Reggie put it “distribute them because we want to give you want you need.”

Here is a look at one of the crashers, to give you a sense of the pure joy they experience at creating chaos: 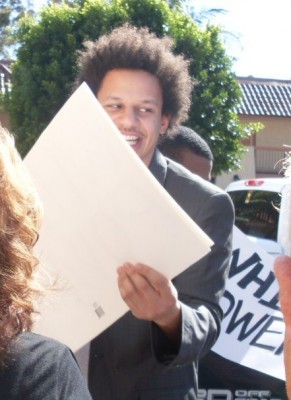 Finally, there was a citizen activist who had his finger bitten off my a member of MoveOn.org during a Tea Party Event.

As a reminder, MoveOn.org is taking partial credit for the cancellation of Trump’s event.

Flash forward to 2016, and it now Trump is being accused of being the primary cause of the disruptions at his rallies. I disagree with this assertion because the front-runner in the Republican primary race is being blamed for the tactics of leftist activists who have consistently tried to derail grassroots activism.

If the preferred target wasn’t Trump, then given the tensions and heated rhetoric of the progressive politicians (e.g., Hillary Clinton asserting that Republicans were her number one enemy), it would be another of the Republican candidates.

I suspect we will have a better gauge of the impact of this weekend’s events on the primaries this Tuesday. However, as a result of what happened in Chicago, and the fact Sanders won’t disavow the actions his declared supporters, I have changed my plans for my primary vote.

Instead of voting for Sanders in the Democratic Party primary, in protest against Hillary Clinton, I will write-in Donald Trump.

I suspect I won’t be the only “backlash voter”, either.

They are fundraising off the success of shutting down the Trump rally.

That means they will do this more often, possibly all summer.

I get why Kasich stands with the protestors, he takes Soros money too. But the rest of the Republicans need to wake up and support the right of the people to peacefully assemble. The current equivocating posture of Cruz and Rubio just gives the protestors cover to keep assaulting people and firing guns in the air.

According to Ann Coulter, Chicago cops were ordered not to arrest any protesters at Trump rally.

Not a Trump supporter ( I say for the thousandth time) but I’m really disgusted by those on the right who are embracing the tactics of the left in an attempt to take him down.

Is that Eric Andre (the picture of the guy smiling holding the white poster boards)?

I can’t say for sure. Minimally, it is a “separated at birth” situation.

Leslie, this kind of behavior riles a lot of us common citizens.
But one should be in control, not easily provoked by agents provocateur. If you have practical lessons to suggest to potential attendees, a post on that topic would not be amiss.

After a long time out of political involvement it was fascinating to go through portable metal detectors to attend a rally some years back. Angry conservatives should not be taping tire irons to their forearms, or packing pepper spray, for example. But there must be ways to avoid becoming victims and easily intimidated. We all prefer being part of a pack not a herd, as the saying goes.

Brilliant, brilliant to write in Trump for the Dem primary. Poetic justice that both Trump supporters and #NeverDonald people (who by and large class him as a Dem) can get behind.

Jim: Thanks for the input about practical tips. Some of those I did touch on in the body of my piece (e.g., arranging for good security before the event, pre-planning on how to handle crashers, having people poised with video-tapping abilities to capture disruptors, websites and social media connections used to share information quickly).

However, I will mull it over some more and maybe come up with a post in response to your suggestions. Thanks for your support!

Yes, you have a good discussion for organizers. I’m interested in advice for attendees.

This article is very timely. I was just driving in my car, and caught NPR pretending that there is violence at all the Republican rallies, caused by Republican rhetoric. Someone finally did allow that there might have been some Sanders supporters in Chicago, but then they quickly added that Sanders did not have anything to do with it, and how awful Donald Trump was, to threaten to have his own supporters go to Sanders events.

They never, ever mentioned the violent attacks by the crashers that have repeatedly occurred. Donald talked in terms of reasonable self-defense. NPR disingenuously left that part out, in order to present the actions of his supporters in a false light, namely as unprovoked attacks.

I’m not sure how many people are fooled by the fossils at NPR, any more. Certainly the Sanders on-line community at Reddit accepts a story that dovetails with Trump’s version. They are not happy with either Sanders or his more belligerent supporters.

Efforts to deny constitutional rights, intimidate, and discriminate against a class of people are classified as hate crimes. The protestors were an organized hate mob.

Chicago cops knew this was coming. They were ordered no hats and bats and no mass arrest kits, no transport for mass arrests, etc. Rahm wanted to see Soros’ thugs beat Americans and for his police to have their hands tied.

Given all the sturm und drang that’s going on this election season, it is to be hoped that we are seeing the final self-destruction of both wings of The Party.

Yep, at this point I have no use for either Republicans or Democrats.

The notion that Trump “caused” the disruptions at his rallies is typical liberal “the wet sidewalks caused the rain”, logic. The disruptions were caused by the Brown Shirt leftists of the democrats. You liberals are to blame for this. I guess the fanciful idea that Trump’s freedom of speech ought to be defended is beyond the average democrat’s scope.

And now that Sarah Palin has endorsed Trump, expect many more of these disruptions.

Chicago police denies recommending the cancellation. The decision was Trump’s. It’s another example of him leading from behind to position himself as a victim.
If you wish to protect our First Amendment rights, don’t vote for the victim, vote for the leader and constitutional conservative.