Republicans have all the enthusiasm. 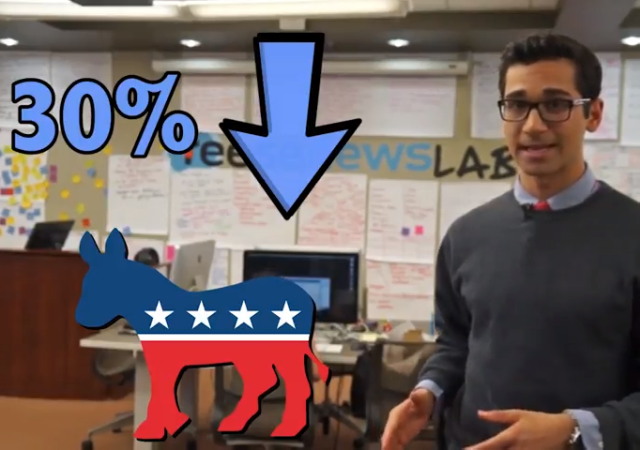 One of the best things Republicans have going for them in 2016 is voter enthusiasm. So far in the primary process, voter turnout greatly favors the GOP over Democrats.

We’ve been tracking the discrepancy between turnout in the Democratic and Republican primaries and caucuses since Iowa — the night it became very clear that people coming out to vote for Republicans were turning out much more heavily.

On Super Tuesday, that trend continued, for the most part. In the Nevada caucuses, more Democrats came out this year, as they did in the Massachusetts and Vermont primaries. Otherwise, Republican turnout was larger — often much larger. In fact, in the 10 states shown below, 1.1 million more Republicans have voted than Democrats. 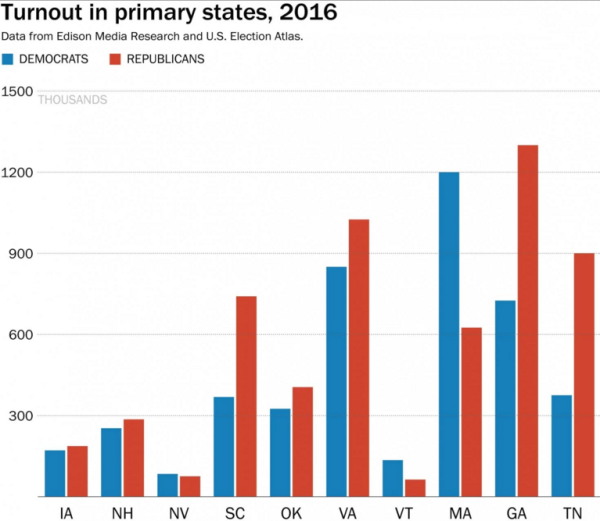 But it’s also the case that turnout is down for the Democrats since their last contested nomination (2008) and it’s up for the Republicans (2012). Across the board. 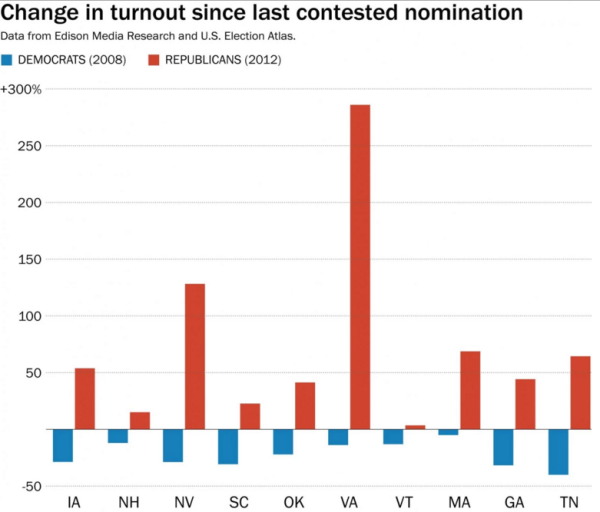 Bernie Sanders likes to talk about getting new voters involved in politics but he’s not the one who’s delivering.

Bernie Sanders talks extensively about revolution, but it appears that it’s actually Donald Trump who is driving record numbers of voters to the polls with his fiery populist message.

Republicans voted in unprecedented numbers on Super Tuesday, setting record numbers in contests throughout different regions of the country.

Every state holding a Republican contest Tuesday — with the exception of Vermont — reached a new high for participation. But none of the state’s holding Democratic contests broke any records.

Texas, home to a battle royale between Trump and native son Ted Cruz, saw a whopping 2.7 million voters show up for the Republican contest — 1.2 million more than the previous record in 2012.

The Democrats’ problem is complacency.

Essentially, they’re too happy with the way things are.

The Democrats’ problem is complacency.

The Democrats problem is Hillary Clinton and Burny Sanders.

How about ‘old, broken down liar’?

Anyone still wondering why the influx of illegals has been enabled by this administration?

They can vote as well as the dead.

Surely the Dems are doing the math.

They have, It’s called destroying the person who is generating all the momentum.

To me the strategy to paint Trump as the worst kind of racist, misogynist, xenophobe, etc., is more an effort to get out the vote for Dems eventually than to squelch the GOP voters. It has worked to a degree in the past. They used Todd Akin long after he disappeared, for one example. Some GOP candidates were constantly painted as a part of the “war on women” party where Aiken soundbites were used incessantly. In states that were more purple, it seemed to work often.

The “Conservative Solutions PAC,” has run negative ads against nearly every Republican in the race, and the KKK / white supremicist robocalls were traced back to them.

I doubt that they are a false-flag operation for the dems. They DO seem to be running the pro-Rubio ads here in Florida and their anti-Trump ads are beyond vicious. I think they are funded by the Chamber of Commerce.

It’s difficult to know solely from primary turnout whether there will be a Democrat general election turnout problem.

Hillary doesn’t excite the voters as Obama did. But the Democratic primary contest is not a close call so there’s the “why bother” factor.

For the general you can expect the DNC GOTV to be massive, the illegals voting in huge numbers and the zombie vote to go almost exclusively to Hillary, or whoever the dem nominee is.

How many of these primaries have been open primaries? Are Democrats voting in Republican primaries to ensure the weakest general election candidate gets the nomination?

Short answer, no. No evidence exists to support that theory.
It just makes the TDS sufferers feel good.

Democratic turnout for the general may be a problem, but no less a Republican problem if Trump gets the nomination. About 50% of those who voted in GOP primaries so far told exit polls they would be dissatisfied if Trump is the nominee. Many like me will never vote for him, he is a man of low character.

Most disturbing is the refusal of either Trump or his fans to repudiate the extremists who support him. People who openly admire Hitler, who mention “white genocide” in their bios. Frankly, the failure to repudiate them looks much like acceptance.

“Most disturbing is the refusal of either Trump or his fans to repudiate the extremists who support him.”

I try my best to be a kindler, gentler Barry, and then along comes a lickspittle asshole making shit up.

Fuck you estragon, you GOPe/democrat. I’ll relish the day when people like you are politically destroyed.

THAT hit ALL of Butt-hurt Barri’s last nerves!

Hey, you’re boy Romney, that NE liberal you love so much, just finished raising trump a few points in the polls.

Trump loves him too.

“Most disturbing is the refusal of either Trump or his fans to repudiate the extremists who support him.”

******* estragon, you GOPe/democrat. I’ll relish the day when people like you are politically destroyed.

Barry calm down.
Your post will probablty be removed, but take solace in the fact that you will probably not be banned. To ban you and not Ragspierre, would reveal MR. Jacobson’s … hypocrisy …bias ,,, well whatever I can’t thinmk of the right word.

I know that it gets to you still try to be civil.

Besides, I think you misinterpret Estragon’s role. He is what Stalin used to call a “useful idiot”.

This from the poor, PC-obsessed little twerp who ran whining and blowing snot bubbles to get me banned because I used the term “buckwheat” (which has NO racist connotation of its own) in connection with him.

Wow! Is this a Trumph altar boy convention? The flies are in full force. That means Gary U.S.S.R Barium must be around.

I am waiting for Gary U.S.S.R Barium to blow the royal Trumph Trumphets. Then we will have to bow down to the yellow idol or else be cast into a fiery furnace of vitriol.

“Fuck you estragon, you GOPe/democrat. I’ll relish the day when people like you are politically destroyed.”
One way to win friends and influence people. Probably the key reason Trump has a problem.

Your sub=headline is wrong.
Donald Trump has all the enthusiasm.
TFTY

If not for Trump. the Republican’s would be just as anemic as the Dems.

No. Trumph, the yellow bile man, has no gravitas.

This is clearly unfair! Democrats must calculate the number of supporters who stay home in November and “deem” them to have voted for democrat candidates. These deemed votes will then be distributed to the states where they are most needed.

There’s so much noise in the data that this is really just “junk” speculation.

Well, no, there are a lot more voters registered as Democrats in Massachusetts—not even close to the same thing. MA has plenty of voters who are as likely to vote R as D … which is why the state spent more more than half of the twentieth century with Republican governors rather than Democrat. In Massachusetts, the number of “unenrolled” voters dwarfs both registered Democrats and Republicans … even when added together. Elections don’t swing on R or D turnout, but on “unenrolled” turnout.

You may recall that virtually every conservative COULD vote for Romney, and most of the opinion-leaders you can name DID SUPPORT HIM.

Not so the stinking, lying Collectivist thug and FRAUDSTER, Mr. Establishment.

I’m concerned that Dems are voting in Pub primaries to raise up Trump’s numbers. In many states, party affiliation is not required to vote in a primary.

Democrats will fall in line.
The Republican enthusiasm is due, in large part, to the Tea Party candidates on the ballot. Don’t give Trump too much credit. Remember how he decided to boycott a Fox debate and give a press conference instead and then the Fox debate viewership went up? He’s not boycotting Fox anymore.

I love the poorly educated