Daily Iowan: Disney’s ‘Zootopia’ Is a Call to Arms for White People

Daily Iowan: Disney’s ‘Zootopia’ Is a Call to Arms for White People 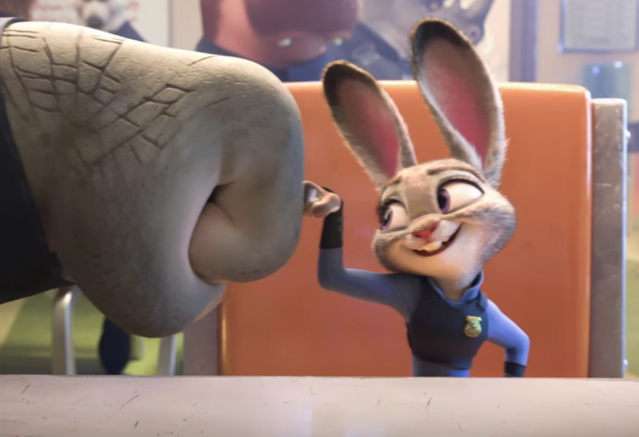 The University of Iowa has an interesting take on Disney’s latest animated feature.

Zootopia is a film about a young rabbit, Judy Hopps, and her dream to join the police force in the world populated by anthropomorphic mammals. Judy is denied a high position in the police force and is assigned meter-maid duty. All animals are bipedal regardless of their species. The animals that are usually prey in the animal kingdom are the dominant force and look down upon the predators. Throughout the whole world of Zootopia, the predators are bullied by the prey, and this is an amazing shift from reality. There is a strange occurrence happening in the film that involves many predators disappearing and going “savage.” Going savage includes going back to their natural state, which means going back on all fours and attacking prey.

I believe the message present in the film is an allegory to the current status of the white population in contemporary society. The majority of the people who were involved in the writing of this film were white. This aligns with my idea of the allegory present in the movie. The prey are akin to minorities of the world, in the way that they get preyed on by the predators, which are white people.

And this isn’t remotely reaching. Not in the least. Nope.

In the real world, this can be proved by the many killings of innocent minorities without any legal action taken. Many people know of the power that white America has over the country. Representation in media and other outlets is mainly whitewashed, and it is difficult to find accurate portrayals of minorities.

The United States was in fact stolen from the Native Americans. I think this movie is a call to arms for the dominant group of the world (white people) to take control of what was supposedly theirs. This is not the message that Disney should be either subconsciously or consciously inserting into its films, even though there is a sordid history with the messages present in their past films.

Disney needs to be more careful with the message it sends in its movies. Children are impressionable, and people such as me with younger family members will watch these movies and realize that there is apparent racism in the films. Disney needs to diversify its writing team to allow for an equal and accurate representation of minorities in the world.

This is the coded call to arms:

What was wisely not advertised in the film’s marketing campaign is its heavy-handed moralizing about racism and bigotry. The real story of the film is about a political plot to portray predator animals as inherently vicious and untrustworthy so that fear will keep a cabal of prey animals in power.

The message isn’t entirely without merit. Bigotry is certainly a negative force which should be opposed. However, no distinction is made in the film between bigotry and the recognition of legitimate differences. The moral of the story is that “anyone can be anything.” It’s meant in both the occupational and metaphysical sense. The film literally rejects biology, promoting the notion that how people identify should define how they are regarded in spite of what they actually are. At one point, a young canine’s desire to grow up and become an elephant is treated as healthy and valid. The allusion to real-world trans issues is obvious.

Such messaging shouldn’t necessarily keep you from seeing the film or taking your kids. The deeper philosophical stuff will probably go over kids’ heads, and you can confidently discuss the issues with older children. But you should know what you’re getting into before you go.

Bill Holbrook’s cartoon strip ‘http://kevinandkell.com/’ has been doing that shtick for well over 20 years. Disney is a late-entry-wannabe.

I never knew BS could be packed that densely. Please believe me – if there’s a call to arms, you won’t need a decoder to hear it.

“The majority of the people who were involved in the writing of this film were white.” “Disney needs to diversify its writing team to allow for an equal and accurate representation of minorities in the world.”

I don’t suppose at least some of the “minority” predators are seen exercising their right to “bear” arms?

Oh, deer me, that was a bad pun. I feel sheepish now.

You know. I was just thinking today that Winnie the Pooh should be allowed to use either the boys bathroom or the girls bathroom and the fact that he never seems to use a bathroom no matter how much honey he eats, shows the true homophobic nature of Mr. Milne and Walt Disney.

Snow Brown and the Seven Vertically Challenged Persons is next.

Excuse me!? SNOW BROWN??? My god in heaven that’s some racist coded language right there!

I am NOT taking my grandchildren to see a movie about a coke whore and the gang of midgets who pimp for her ????

Saw that once at a secret festival. They didn’t tell you what was showing before hand. That night was banned cartoons. So there are still film in the tin out there somewhere.

Disney has shown so many sad characters. For example: six out of seven dwarves are not Happy.

Kimberly, get a grip! It’s Disney! They have always put liberal messages into their crap. Take a break from all of this and come back with some deep thoughts about important things. Lately you have become an embarrassment to LI with some of your political comments and articles. You are like the woman on the Titanic who was complaining about the picture in her cabin being crooked while the boat was sinking.

What I see here is that young Muslims are the predators, they get tired of their (real or imagined) second-class positions in life, and they go “native” and become predators (terrorists) as is their true nature (according to their own religion that they profess to believe). The message here should be that you must attend to the inner natures of people, and not presume that you can put them in any place (superior or inferior to others) and expect that they won’t, at some time, act out according to their nature. Predators are always predators even when they seem, or are pretending, not to be.

Funny thing was that I loved it and found the message not to be heavy handed. The ultimate point (aside from bigotry- bad)is that, even people who feel victimized by bigotry can be bigots. So, for the SJW types, this message would be anathema.

Considering the left has corrupted every institution in this country and shamelessly use them to spread leftist propaganda, they have reason to be paranoid someone might be doing the same against them.

Fascists are a paranoid lot.

When all you have is a hammer, everything looks like a nail – even a complete vacuum.

And they pay how much for that education? Perfect case for suing to get your money back.

I am of the belief that Zootopia is more of a mirror in which we can see ourselves (with a little extra fur) and the way in which we live our lives. We all empathize with the bunny, the ‘scrappy little guy’ who is determined to achieve her dreams, and the sly fox who always has an angle on any problem. We see our boss in the gruff police chief, politicians in the mayor/assistant mayor. In short, when we watch this movie, we see ourselves.

And it appears that the U of Iowa writer did too.

“It’s not about how badly you want something, it’s what you’re capable of.” – Chief to Bunny.

BOOM. That’s why this movie is a call to arms for white people. It promotes merit, aka, reality.

I think I would like to see this one! Also, I’m a sucker for cartoons…

Looks dumber than hell but you won’t go broke underestimating the intelligence of America apparently.

“The animals that are usually prey in the animal kingdom are the dominant force and look down upon the predators. Throughout the whole world of Zootopia, the predators are bullied by the prey, and this is an amazing shift from reality. ”

Did anyone actually watch the movie? It was the other way around, the predator animals ran everything and bullied the prey, then a sheep got sick of it and hatched a diabolical scheme to seize power. The very first scene in the movie has Hops standing up to a fox bully, who messes her up a little.

This is what happens when you rely on IMdb for your information.