Cruz Kicks Off Women for Cruz Coalition in Madison, WI

Cruz Kicks Off Women for Cruz Coalition in Madison, WI

“This event this morning is a celebration of strong women.” 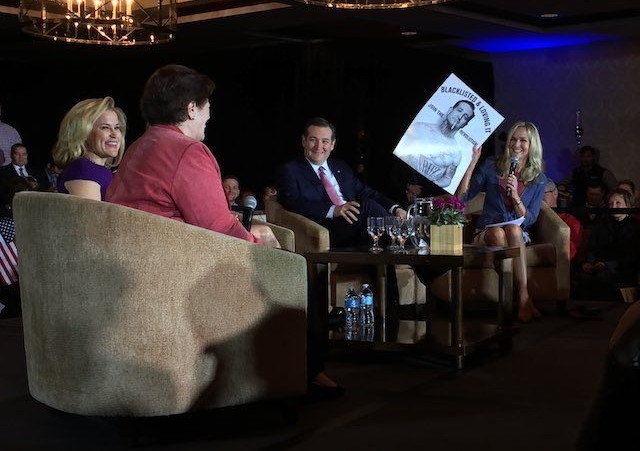 On Tuesday morning, Ted Cruz kicked off a Women for Cruz coalition in the liberal stronghold of Madison, Wisconsin. The senator was joined by his wife Heidi, mother Eleanor, and former presidential candidate Carly Fiorina for a conversation on issues considered important to women.

In a change of pace from prior events, Cruz gave a shortened stump speech and focused on the meaning of the term “women’s issue,” itself:

“This event this morning is a celebration of strong women. One of the most frustrating things about the Democrats is the Democrats love to pigeonhole women. Put ’em in a little box [and] you have a set of issues that are women’s issues. Well, listen. I have news for the Democrat party: Women are not a special interest. Women are a majority of the United States of America and every issue is a women’s issue.”

Cruz went on to say that his campaign is about three issues, those being jobs, freedom, and security. Despite the Democrat party’s effort to deem only issues advancing the progressive cause as valid women’s issues, Cruz made a point to emphasize that these three crucial issues are inherently women’s issues just as they are men’s.

Cruz then sat down with his wife, mother, and Carly Fiorina for a series of questions fielded by moderator Rebecca Hagelin.

At his rally Wed. in Madison, @TedCruz is unveiling a Women for Cruz coalition along with his wife, mother and @CarlyFiorina, per campaign.

Heidi Cruz spoke of having spent time in Africa as a child and the effect it had on her career choice. The daughter of a missionary and dentist, she explained how she came to appreciate the key tenets of American society and government.  “You think about why these countries are so far behind [and] it is because they do not have a system of capitalism where people can borrow money, have an idea and be able to fund that idea, and produce a product.” Neither is there a system that allows for someone to take risk while baring the responsibility for that risk, she explained, and a court system for the pursuit of due justice. Lastly, she spoke of the lack of a political system free of corruption. “It is so important that we protect those three basic things about our democracy.”

Former Republican presidential candidate and Hewlett Packard CEO Carly Fiorina recalled the career path she travelled, having started as a secretary for a small real estate firm and finished as the head of a $90 billion technology firm. She emphasized the need to simplify the personal and corporate tax codes, stressing that nearly two-thirds of the nation’s job growth comes from small businesses. The problem today, she said, is an excess of power concentrated in the hands of a few:

You see all that complexity in the tax code? It favors the big. The big company over the small business. It favors the wealthy and the well-connected and the powerful, like Donald Trump, by the way, who is ‘the system.’ And he will preserve the system because he’s taken advantage of the system all his life.

So, why is Ted Cruz’ tax plan so important? Because it’s not just about lowering rates: it’s about simplifying … The reason being a constitutional conservative is so important to economic opportunity is because conservatives understand that the problem is too much power concentrated in the hands of too few. Too much economic power, too much political power.”

Although neither Mr. nor Mrs. Cruz addressed rumors printed in the National Enquirer, they did take time to describe a few things they appreciated most about each other.

The event this morning is one of several events the Ted Cruz has held in Wisconsin in the past week. A recent Marquette Law School poll has Ted Cruz pulling into the lead the with 40% of likely voters. Donald Trump follows with 30% and John Kasich trails with 21%. The poll is the final poll to be released before Wisconsin holds its primaries on Tuesday, April 5.

How nice of Trump to have flip-flopped already today on his call to criminally punish women – not the fathers, not abortionists – if abortion were ever made illegal.

How will he respond when bing smeared as a sexist for challenging some Clinton statement?
Will he have a response to pass that test? He’s vulnerable. His hiring women record is lousy.

Ted Cruz does not have a problem with women. Cruz has never had affairs and he treats women with respect, unlike Donald Trump, who objectifies women as sex objects, including his own wives. trump has had multiple affairs while married and wrote about them in his books. trump is threatened by strong women and is currently trying to destroy Michelle Fields career for telling the truth about Corey Lewandowski. Donald Trump has already lost this Presidential race, with his own foul mouth and boorish behavior.

He is a republican…. that’s all they need to call him a hater.

Romney wasn’t a sexist either & had a good record. But he flunked the war on women charge and sank.

The answer to the war on women charge is easy if Hillary is the opponent. Select Carly Fiorina as his VP candidate. That combination would effectively kill most of the Democrats smear campaign.

Trump was caught off guard by the question of illegal abortions.

He took the logical road which is: if a person breaks a law they are held responsible.

As it turns out, pro-life leaders quickly clued Trump in…

It’s the performer of an illegal abortion who is the law breaker and expectant mothers and babies are the victims.

He has already clarified his position on this question and it is being reported widely.

Trump: If Abortions Are illegal, Abortionists Are Law Breakers, Not Women

Right, we get it. Trump changing his positions is one of his strengths.

How do you get caught off guard this far into a primary about a detail of one of your party’s major issues?

At this point he should know more on the subject than “I’m pro life”.

Trump was caught off guard by his ignorance on the issue and a position he only pretends to hold.

The Cruz Davidians will be put out of their misery on Tuesday night. Wisconsin will end Lyin’ Ted’s first ballot chances. Once NY hits, there will be no doubt that he cannot win. He won’t be the nominee.

Maybe Rags can host some Cruz Seminars on attacking women who are supporters of Trump? Just a thought.

Let’s see…. Ted Cruz was cornered by the UK’s Daily Mail to definitively say that he didn’t have an affair. Carly jumped in to save Ted. The reporter pushed Ted again, and Ted didn’t really answer the question.

(Side note, why won’t the US media push Ted on his non-answers?)

If he did cheat on his wife, what will become of this “coalition”?

He answered it the day the NE posted it’s fiction.

Women for Cruz?
What he’s run out of mistresses and needs more?

Funny, the thread on Donald Trump’s National Border Patrol Council endorsement hasn’t appeared yet. I mean it was the first endorsement they ever gave. The first of its kind. A celebration of strong borders, in a sense.

Trump getting a UNION endorsement? After getting the FIRST ever endorsement from the Sleaze rag National Enquirer?

I was a Teamster for a bit, well a part-time Teamster, but I paid dues,… anyway, “We need a person in the White House who doesn’t fear the media, who doesn’t embrace political correctness, who doesn’t need the money, who is familiar with success, who won’t bow to foreign dictators, who is pro-military and values law enforcement, and who is angry for America and NOT subservient to the interests of other nations. Donald Trump is such a man,” the union said. CNN (report on endorsement)
But, I have to agree about the NE. It does seem a bit dubious at times. Just a tad.

Ted Cruz’s definition of “strong women”.
1. Women independently wealthy because they’ve tied themselves to the GOPe.
2. Women who will have sex with him.

Come to think of it, that is very similar to Bill Clinton’s definition — just change GOPe to Dem machine.

You really should stop projecting your own opinions of women on to others.

I thought the skirt Cruz were to the event was particularly stunning. Nothing says strength like having your mommy proclaim how good you are. Just ask Jeb!

Did Cruz lift his skirt a little and show the crowd his own vjay jay?

I really like how Cruz, Kasich, and the cruzbots are all trying to criticize Trump FOR BEING TOO STRONGLY PRO LIFE for them. Arguing it is unreasonable to be that strongly pro life and a more liberal more to the pro choice side of things is better.

Hey, IFFFFFF that were Dr. Gaslight’s position on abortion, swell.

It isn’t. He doesn’t HAVE “A” position on abortion.

He lies. Constantly. He has no “conservative core”. He DOES have a Collectivist core.

A liar is who he is. Remind you of any sitting “president”?

No Gary. He changed it back after getting heat and said it was always his position.

If he wasnt lying, then he has the same “more liberal” position on abortion as Cruz.

Following outcry over his comments, the Trump campaign issued a statement: “This issue is unclear and should be put back into the states for determination. Like Ronald Reagan, I am pro-life with exceptions, which I have outlined numerous times.”

So, ANOTHER time “mee, too!” Donnie comes lapping up behind Cruz.

The guy is showing signs of breaking down under the pressures of all those lies.

Trumpkin dead-enders are sad. I guess they’d rather go down with the ship in a futile gesture, just like McGovernites.