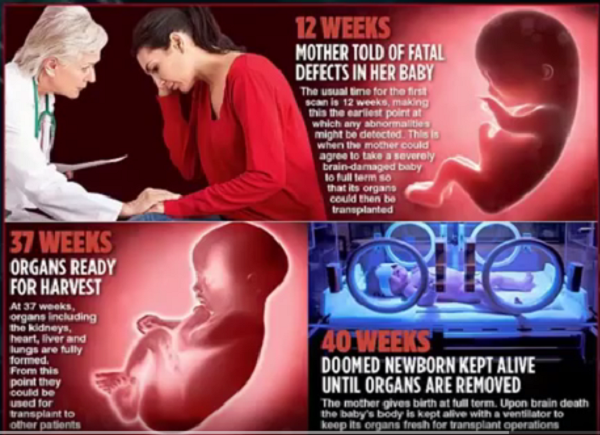 In a move being called “ghoulish” by one critic, Britain’s National Health Service (NHS) has announced plans to ask pregnant women to carry to term babies that have severe birth defects so that, once delivered or still born, their babies’ organs can be harvested for transplant.

Women whose babies develop fatal defects in the early stages of pregnancy will be given advice on going ahead with the birth so the NHS can harvest their organs, The Mail on Sunday can reveal.

Most expectant mothers opt for termination after being told the devastating news their child has no chance of survival once born.

But now, amid a chronic shortage of donated organs, mums will be ‘supported’ to have the baby at nine months so that the child’s vital organs can be taken for transplant.

. . . .  The move was revealed at a medical conference where NHS transplant surgeons said they wanted to take more organs from babies nationally to address a dire shortage.

As part of this drive, midwives and other NHS workers are to be educated about the potential for using babies’ organs in transplants.

In the past two years, only 11 babies under two months have become organ donors. But doctors believe they could raise that figure to around 100 a year.

Speaking of obtaining more organs from newborns, transplant surgeon Niaz Ahmad, of St James’s University Hospital in Leeds, said: ‘We are looking at rolling it out as a viable source of organ transplantation nationally.”

The Daily Mail continues with more details about this plan:

‘A number of staff in the NHS are not aware that these organs can be used. They need to be aware. These can be transplanted, they work, and they work long-term.’

One specific case medics are considering are babies diagnosed with a brain defect called anencephaly, which can be detected by routine scans as early as 12 weeks and which gives babies no chance of survival.

Under the new proposals, mothers would give birth in the normal way and once doctors had certified the infant dead, its vital organs would be removed. However, donation would not be raised when a woman was still deciding whether or not to have an abortion – and nobody would be compelled to donate their baby’s organs.

In some cases, where donation has been agreed, babies could be certified brain dead but their bodies kept alive by artificial ventilation. Surgeons could then remove organs from these so-called ‘heartbeat babies’ when they are fresh, maximising what can be used and the chance of successful transplant.

It’s gross but…
I’ve never heard of an adult receiving a transplant from a baby.
It may be possible, but I’m pretty sure that you are never going to see a baby’s heart, kidney, or lungs being used as transplants.

So who gets the transplant. It is going to have to be another baby. o basically a very touch choice.

The possibility of harvesting tissues and stem cells does come to mind.

Fetal stem cells have produced nothing of value so far. About the only thing I can see being successfully transplanted is skin and corneal tissue. Other organs are just too small to be good replacements. Possibly spleen with 10-15 years before those cells can be fully functional at insulin formation.

Sad but true, children can need transplants just as badly as adults. Johns Hopkins has a center for that in the US. The ethics of where these transplanted organs come from is a long and winding road.

The march of nihilism gathers momentum. I suspect the forces for humanity are vastly outnumbered by the forces against.

Truth seekers would say “NO!”

I have a modest proposal….

Swift came immediately to my mind, too, RW. Sadly, this NHS proposal is not satire.

Except for the possible misuse of ventilators, I don’t see how this is fundamentally different than any donation by the parents of an non-viable infant or even child who is killed or dies.

On an intellectual level, maybe, but as a woman, the idea of carrying my baby to term only for him or her to be used for parts . . . it’s just hard to imagine how difficult that could be. Apart from the potentially troubling notion of being a walking incubator for transplant parts, women can form significant attachments to their babies even while they are still in the womb. According to the reports, the women would be able to make the choice themselves. So that’s a plus. It is definitely an ethical dilemma, though, and the slippery slope from here is also worth consideration.

All that being granted, parents still make the decision to donate the bodies of their lost children so that other children may live. It must be excruciating.

Some slippery slopes can be…and are…successfully terraced by good law.

BTW, fathers form considerable attachments to children while in the womb, too. I damn sure did.

I know, for a fact, that fathers do, Rags. I was speaking as a woman, as I made quite clear in my comment. The difference between losing a child in a tragic accident and losing one but not actually losing him or her for many many months, still carrying him or her within your body and to term under medical care for the sole purpose of organ donation seems rather obvious to me.

We will have to agree to disagree on this point.

I wasn’t impugning your comment, just holding up our end for the males.

Is this any different then a man leaving his pregnant dead wife on lifesupport so the baby can come to full term?

One bright light is that soon we will be able to create cloned organs from stem cells. Where would we get these stem cells? From the original transplant recipient. Those are the safest to use.

This is a particularly obscene riff on an old Jonathan Swift piece, “A Modest Proposal”. He suggested that the problem of the increasing poor population of London could be solved by encouraging the use of their babies as food.

I can envision a scenario where women are paid to get pregnant just to provide organ donors. The thought is beyond nauseating.