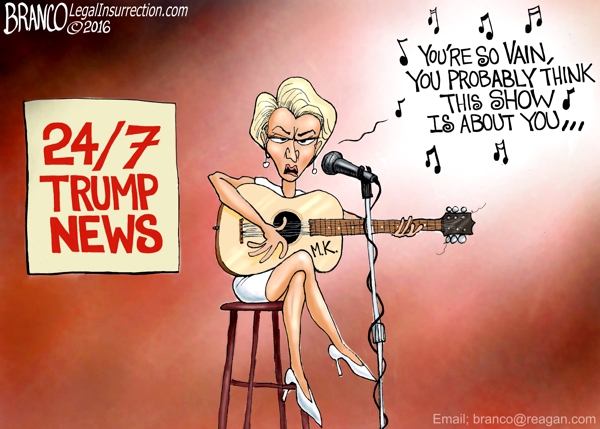 She is not so strange. A lawyer turned FNC pseudobimbo to make a lot of dough by doing what she was told.

Trump supporters seem to be easy to spot: When so directed by him they act in unison to disparage anyone who they don’t like.

It will be interesting to see how quickly he gets the additional votes he desperately needs once he has secured the nomination. Right now, a massive number of votes at least tell pollsters they would never pull the lever for him. And his supporters currently care less about influencing even one of them. For they are all ________ (fill in the blank from your choice of words like dumb, stupid, bimbos, losers, failures, etc.)

Lost is the word I go for now. Rubes is another good one.

Right on! Calling people you disagree with “lost” and “rubes” is a great way to bring them over to your way of thinking!

I was told I didn’t matter in the grand scheme of things.

It’s amazing what they jump to when you ask Trump supporters to logically support their candidate. Either they try to smear your candidate or attack you.

I suspect you could say the same of his media detractors, as well.

Trump supporters seem to be easy to spot: When so directed by him they act in unison to disparage anyone who they don’t like.

Megyn Goldstein, Enemy of the Trumpolution.

I make comments about how the Trumpadores are Anti-Semites, Not Dpnny, Just many of his sycophants.

HEY DUMMY, DONNY THE MADS’ DAUGHTER IS AM ORTHODOX JEWISH CONVERT AND HIS GRANDCHILDREN ARE JOOOOOOOOS.

Live with that, if you can – what a dolt!

My unanswered question to you, Amy, continues to go unanswered.

Who do you support for president?

‘Not Trump’ is not an answer and neither is silence.

Interesting that you call me a Trump supporter on the basis that I call MK a pseudobimbo. You did not notice that I complemented her on leaving a poorly paid profession to make a lot of money by doing Ailes bidding. You did not include my word for her in your list. Is that because you do not understand the prefix pseudo? Remember, “assume” has many implications. Now, crawl back under your rock.

Over the weekend Fox, on Waters’ show, ran a piece designed to show that the Chicago issues 10 days ago was caused by outside agitators looking for a fight. The first evidence they played was a clip of a couple of women saying that Trump “is a liar.” Nevertheless, Fox does not call Trump out for his constantly expressed projection that Cruz is a liar.

TY AB, you nailed MK, stilettos, haircut and all.

You hit it out of the park once again, Mr. Branco.

Politics aside, I can’t believe anyone is really a MK fan. Such a pretentious phony-baloney. I think Anthony captured the essence of her attitude. Well this pic is good too:

I’m fond of these of Mrs. T=rump. The Third.

Melania Trump certainly was a beautiful supermodel. She is still a beautiful and classy lady.

Those are much better looking pictures than the ones of a blubbering and suicidal Heidi Cruz sitting in the median of a busy expressway after possibly having been forced out of a car by someone likely named Ted Cruz. Of course I wasn’t there to actually see the blubbering suicidal Heidi Cruz arrive at that location but the cover story that she walked there just doesn’t pass the smell test.

Yup, Melania was definitely a model. But MK, she is something unique, and that is why the cartoon hits home.

Megyn Kelly Indirectly Responds to Trump: My Ratings Have Been Just Fine Without Him
http://www.mediaite.com/tv/megyn-indirectly-responds-to-trump-my-ratings-have-been-just-fine-without-him/

If she were a toady to him you would be singing her praises.
try just a LITTLE honesty.
You like the Draft evader, that’s fine, why the need to knock someone else ?

Outstanding! MK lost me right before the first Fox debate, when she marched down the hallway in those hideous FM stilettos stating that they (the moderators) were going to turn the political world upside down. She’s so vain, she probably DID think it was about her.

Mexico Joins With Cruz & The Establishment To Turn The USA into Northern Mexico aka México Del Norte:

Mexico is mounting an unprecedented effort to turn its permanent residents in the U.S. into citizens, a status that would enable them to vote — presumably against Donald Trump.

Officially, Mexico says it respects U.S. sovereignty and has no strategy to influence the result of the presidential race. Yet Mexican diplomats are mobilizing for the first time to assist immigrants in gaining U.S. citizenship, hosting free workshops on naturalization.

“This is a historic moment where the Mexican consulate will open its doors to carry out these types of events in favor of the Mexican community,” Adrian Sosa, a spokesman for the consulate in Chicago, said before an event on March 19. In Dallas, about 250 permanent residents attended the consulate’s first “citizenship clinic” in February and another 150 in its second in March. In Las Vegas, the turnout topped 500.

Well, in addition to the thread-jack…

You’ve turning into a damned liar instantly, now that you’ve dropped your mask.

Morning Rags. 🙂 you hateful old coot. How ya doing? Ready or your Establishment Cruz boy to lose Arizona?

“The only path that remains to nominate a Republican rather than Mr. Trump is to have an open convention,” Romney wrote in a Facebook post. “At this stage, the only way we can reach an open convention is for Senator Cruz to be successful in as many of the remaining nominating elections as possible.”

It’s so sweet when ‘conservatives’ join with the Establishment to elect Hillary.

As I hear it, The establishment will try their best to create a brokered convention and dump Cruz & Trump at the earliest possible minute.

That, of course will give Hillary a smooth landing at the White House.

The establishment will attempt to dump Trump & Cruz and set up someone from the wings as the nominee. Rick Perry has been making noise. The idea is frightening.

Yes… word from Twitter Notables is Rick Perry is on the top of the short list to lose against Hillary in the general after they shut out Trump by using Cruz as a brokered convention Trojan to blow up the tea party.