CDC is shocked by size of the outbreak and number of fatalities. 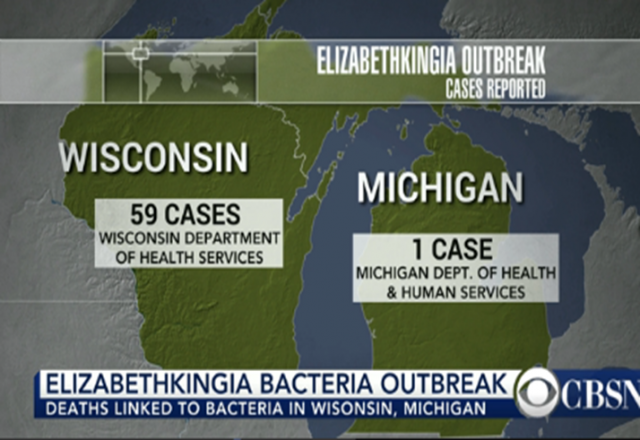 As the primary battle in Wisconsin heats up with the endorsement of Senator Ted Cruz by Governor Scott Walker, an different kind of fight is occurring among the state’s citizens.

As of this report, nearly 60 Wisconsin residents have been stricken with bloodstream infection from a bacteria called Elizabethkingia, and 18 have died. Additionally, one Michigan resident has also died from an infection.

Reports indicate that the bacteria seems to be an aggressive strain, and that older victims are more at risk for serious complications.

“This is not a new bacteria, although the strain that seems to be spreading now in Wisconsin is a slightly different one than we’re used to seeing,” CBS News medical contributor Dr. Holly Phillips explained. “It can cause serious blood infections or meningitis, but generally we see five to ten cases in every state in every year.”

….The bacteria got its name from the microbiologist Elizabeth King, who discovered it in 1959. Symptoms of infection include fever, chills, headache, neck pain, and skin infections. Those most at risk for complications are newborns, the elderly, and people with compromised immune systems.

“For people who don’t fall into those groups or are otherwise healthy, you’d probably be fine if you contracted it,” Phillips said. “But still we need to be extraordinarily vigilant. The average age of the people who have died in Wisconsin is about 77, so it’s affecting the older population.”

Presently, the Centers for Disease Control and Prevention (CDC) and other public health officials are searching for the origin of the outbreak, which is presently unknown.

The CDC is shocked by the size of the outbreak and by the total number of fatalities. In contrast to past Elizabethkingia outbreaks, it is large and dispersed across a wide area.

Michael Bell, deputy director of the CDC’s Division of Healthcare Quality Promotion, told The Washington Post this month that the Wisconsin Elizabethkingia outbreak is “one of the largest that I’m aware of and certainly the largest one we’ve investigated.” As the Post notes, all of the cases identified so far have the same genetic footprint, which suggests that the entire outbreak can be attributed to a single source.

Chris Braden, deputy director of the national center for emerging and zoonotic infectious diseases at the Centers for Disease Control and Prevention, reported that determining the potential source for all of these infections has been frustrating:

The culprit could be a product that was manufactured in a plant contaminated by the bacteria, Braden said.

“That’s the theory, but we haven’t been able to find what it might be or how something could have been contaminated,” he said. “We’re looking hard at all sorts of different products that these people may have been exposed to — personal care products or medical products. Just think of yourself and how many things you put on your skin or you ingest in some way each day. We’re trying to figure out if there’s anything in common.

“It’s painstaking field work,” with health officials asking 300 to 500 questions of each person who was infected or the families of those who died, Braden said. “But the longer we go without a lead to a common source, then you start to wonder whether there is one,” he said. “But we’re not there yet.”

Health officials in neighboring states like Minnesota have sent alerts to medical facilities and labs to review previous records for potential Elizabethkingia bacterial infections and watch for new cases.

Stupid me. I was trying to figure out where Wisonsin, Michigan was.