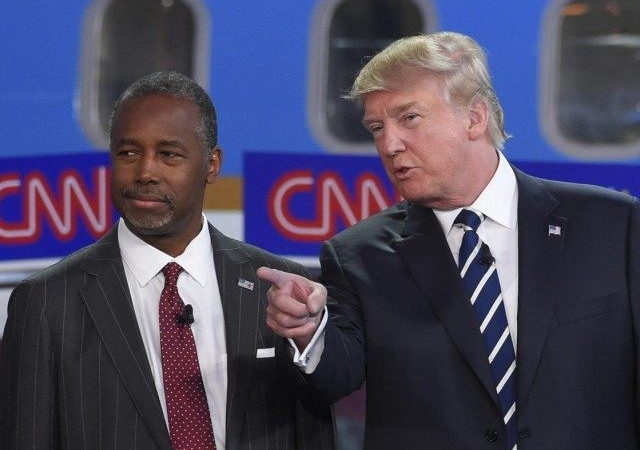 Since neurosurgeon Ben Carson suspended his presidential campaign, rumors of a looming Trump endorsement have bounced around the poltisphere.

The Washington Post reported this evening that Dr. Carson will endorse Donald Trump at a rally Friday morning:

Conservative favorite Ben Carson, who last week suspended his campaign for the Republican presidential nomination, plans to endorse Donald Trump on Friday morning, according to two people familiar with his thinking.

The endorsement, perhaps the most high-profile nod for Trump since New Jersey Gov. Chris Christie backed him, was finalized Thursday morning when Carson met with Trump at Mar-a-Lago, the luxury club owned by the Republican front-runner, the people said. The sources requested anonymity to discuss private conversations.

Friday’s announcement will also take place at the club in Palm Beach, Fla., where the onetime rivals will appear alongside one another at a news conference.

The support of Carson, a famed retired neurosurgeon and author, will likely give Trump a boost with GOP base voters and evangelicals, who embraced Carson’s campaign in its early days and fueled his brief rise to the top of Republican primary polls.

Carson’s decision may surprise some of his backers since Trump made blistering critiques over the past year of stories from Carson’s past. But according to people close to him, Carson has gradually come to see Trump as the GOP’s best chance of winning a general election and turning out droves of disengaged voters.

Trump and Carson traded their fair show of blows while Carson was still in the running, most memorably when Trump compared Carson to a pedophile. Speculation that Carson is still incensed over Cruz’s alleged dirty tactics in Iowa are also in play. The Cruz campaign was blamed for circulating a rumor Carson would be dropping out. Carson countered by saying he was leaving Iowa for need of clean laundry.

WAJ Adds: Ben, this is Sad!

Ben Carson on Donald Trump: 'Pray for him' https://t.co/LjwyI3ynGd

Trump likens Carson's 'pathology' to that of a child molester @CNNPolitics https://t.co/oj8dxJultR

Trump is probably the only hope for real change. At least on the Republican end.

And I say that knowing that it’s not 100 percent that he’s on the ‘up and up’ either. But all of his critics are pretty much disqualified by word or deed or both and so I’m hoping enough other people like me are willing to take a chance.

Um, Trump’s campaign manager just roughed up a female reporter for BREITBART- the news org that has been the biggest shill for Trump. Yeah, Trump is for real change all right- NOT. I will NEVER vote for him.

That’s assuming she’s telling the truth.
I don’t.
And even if she is a grab or even a shove is hardly ‘roughing up’. Seriously, I live in Baltimore MD. Average fights sometimes end up with kicks to the head, and you want me to care that someone who supposedly was blocking the way of a candidate was grabbed?
Vote for whoever you want.

What Corey did was bad. What Cruz did – telling Carson’s supporters he might be out…. Well, if I was Carson, I wouldn’t choose Ted either.

And I sure wouldn’t choose Kasich. What an arrogant smug condescending piece of crap.

I’m with you on Kasich, CtF, but I have to repeat the fact that this incident regarding the CNN report that Carson was going to Florida and skipping the caucuses is hugely over-blown. Some Cruz campaign volunteer saw the story on CNN and jumped to the quite logical assumption that Carson was bailing on his campaign. It was only later that Carson’s campaign came back and explained that he wasn’t leaving the race but was instead going to get clean clothes.

I’m sorry, but I truly fail to see the problem here. CNN said Carson was leaving, the Cruz campaign (and the Rubio campaign) took that for what it seemed to be. Who the heck leaves the campaign trail to get fresh clothes in the middle of a caucus? And who would think, gee, going home for clean clothes the night of the Iowa caucus must mean . . . um, that he doesn’t know about dry cleaners? No one would think that in a million years. I saw the CNN report, too, and figured Carson was out. Who wouldn’t?

Proof that Breitbart Reporter Was Nowhere Near Trump’s Campaign Manager

Trump and Carson traded their fair show of blows while Carson was still in the running, most memorably when Trump compared Carson to a pedophile.

Stop perpetuating this lefty race-card meme. Trump did not compare CARSON to a pedophile. He compared the incurability of pathological violence to the incurability of deviance. And he also said that he didn’t believe these stories from Carson, i.e. they were embellished for the purposes of relating to the violent youths Carson was trying to encourage.

“Race-card”? It’s funny you that you are the only one who has brought up anything having to do with race here. The only blog I’ve seen where the commenters have been persistently fixated on Dr. Carson’s race have been the swamp-dwellers at The “Conservative” Treehouse blog.

Now that “Uncle Ben” is all y’alls hero, I guess someone’s going to have to go back and do some memory-holing of some of the vile slurs made against him.

Carson – another shiv in the back while still healing from Palin’s dagger. And to think I actually considered voting for him.

Donald Trump compared Carson to a pedophile. Carson has always struck me as an opportunist and in it for the money. A couple of months ago, when he was dropping in support, his campaign sent me a sketch of a weird saintlike Carson and then asked for money. I didn’t send any

You and Kemberlee need to go back and do a review of sentence structure, in this case what was the subject of the sentence, and what was not.

The left-wing media knew they were being misleading and did it deliberately. What is your and Kemberlee’s excuse? Deliberate propaganda or ignorance?

Why would Trump even want to court a pathologically violent fake Christian whose state of mind he more than one compared to that of a child molester? Oh, and whose supporters are all retarded? Why is it suddenly a “plus” to have this kind of man and those kinds of supporters on his side?

Yeah, no. As a one-time Ben Carson supporter who was actually out there defending him against all those ugly smears by Trump and his fans, this endorsement won’t make me think more highly of Donald Trump. It will just make me think less highly of Dr. Carson.

” It will just make me think less highly of Dr. Carson.”

Before this election is over, there are not going to be many left you think highly of.

Huge investments of hatred and delusion are like that.

WAJ Adds: Ben, this is Sad!

That is a surprise endorsement. I’m old and witnessed many a campaign. This cycle has created many strange bed fellows.

If you look at the choices, who wouldn’t scratch Rubio and Kasich right off? Then look at Cruz and Trump…. Trump is logical, for Dr. Carson.

Trump is only ‘logical’ for Carson because Trump exploited the CNN report and Cruz volunteers who believed the report; Carson is naive enough to imagine Trump actually stood by him. Think about Trump for two seconds–love him or hate him, he doesn’t stand by anyone if it won’t help Trump in some way.

Cruz didn’t do anything to Carson. Cruz won Iowa, and it suited Trump’s “I’m a winner, always with the winning so much you get sick of the winning” schtick to back Carson and blow the whole thing out of proportion. Apparently, Trump’s transparent theatrics are not so transparent to everyone.

So, now Ben Carson’s a dumbass. Him and Jeff Sessions. Oh, and Newt. Giuliani too…

Y’all sure are a bunch of sore losers.

They are backing themselves into a teeny weeny little corner, dissing everyone they once admired who isn’t seeing their god in Cruz, or if not Cruz, then out of spite, even Rubio.

(This is illustrative of why Cruz cannot win.)

Mr. Donald “The Art of the Deal” Trump, is likely striking deals with the dropouts … Carson for HHS, Christie for DOT (sorry, couldn’t resist) or Chief of Staff, maybe Cruz for DOJ. Wouldn’t be surprised to see him thwart the brokered convention threat by naming a ‘dream team’ to his cabinet ahead of the convention.

You got it wrong – Christie will be AG. Newt is going to be chief of staff.

Amy is quite correct. Although I anticipated this childish and petulant move on Carson’s part many weeks ago it is still a disappointment to see that he can’t control it.

This GOP campaign has been a real test of sober intelligence and character vs. those whose reality is warped by all consuming subjective feelings and petty jealousies.

Carson has failed that test, and doubly failed as a Christian. On one hand we have Cruz, a fellow Christian who deeply apologized to Carson for the actions of a zealot staffer who passed on a misconstrued CNN report to other Cruz staffers. Cruz personally treated Carson respectfully in debate, and shares most closely his values.

Then we have ‘strong-man’ Trump who, seeing the growing press reports smearing Carsons biography, piles on and tells Carson directly and indirectly he is still pathologically violent, had a phony conversion, slips in the pedophile example, and re-enacts in the debates Carson “stabbing” his friend.

Trump does not apologize (says has never needed forgiveness) and Carson’s poll numbers then collapse.

So who is Carson still mad at? Cruz.

How do you explain it? Good old dominance ranking.

The same kind of person who can’t forgive someone who apologizes (that requires real forgiveness), can forgive his accuser when he ‘shames them’ relentlessly. Trump made Carson feel small, dirty and ashamed of his past, so Carson seeks forgiveness from Trump by endorsing him. He is the ‘abused wife’ who thinks ‘Trump is right’…I am a sinner’

Which tells us that Carson is one sick puppy. Trump destroyed him, but he resents Cruz. Disgusting.

” and doubly failed as a Christian.”

Really? So, endorsing Trump is unchristian?

“Which tells us that Carson is one sick puppy.”

Man, Y’all really are sore losers. You should be ashamed of writing that drivel.

It’s called politics, and it is being practiced by one and all, including St. Cruz.

Forgiveness is supposed to be a Christian virtue.

This is illustrative of why Cruz can’t win. His supporters epitomize the very worst of intolerant and dogmatic stereotypes of extreme right-wingers that are hated and feared by the majority of people in the country.

“Forgiveness is supposed to be a Christian virtue.”

Tell that to Trump. He seems to be confused about that concept.

9 am. It will be an interesting presser. Perhaps Dr. Carson will smooth off some of Donald Trump’s rough edges.

Why would a moral-pillared, easy-mannered, Constitution-loving Ben Carson endorse someone who is none of those things?

At least two. In reality, there’s as many T-rumps as he thinks you need.

I didn’t know you were one of his “cultists”.