Ben Carson: The Donald done me wrong, but that’s okay

Ben Carson: The Donald done me wrong, but that’s okay 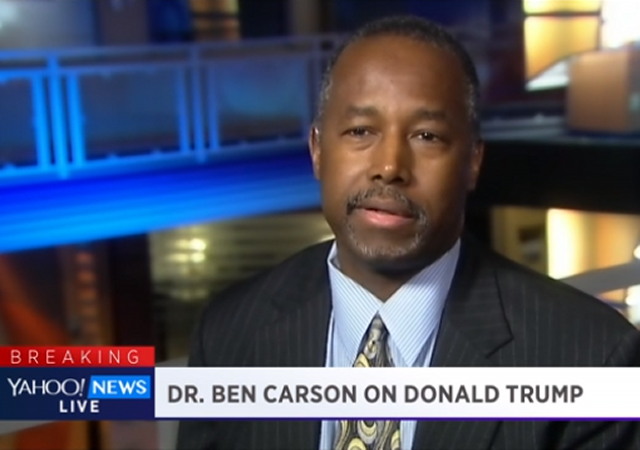 Dr. Ben Carson is no longer running for president but he’s had a rough couple of days in the spotlight due to his support for Donald Trump.

First, Carson was grilled by a reporter for standing by Trump who at one point in recent months compared Carson to a child molester. Carson’s response was baffling.

Carson on Trump comparing him to a child molester: “It did work”

On March 16, 2016, Dr. Ben Carson spoke to Yahoo News and Finance Anchor Bianna Golodryga about his support for Donald Trump despite Trump previously comparing Carson to a child molester. Carson said, “You have to admit to a degree that it did work.” He continued, “A lot of people believed him.”

Next came the charge that Trump may have plagiarized an op-ed written by Carson.

Alex Pappas of the Daily Caller:

Trump Appears To Have Heavily Plagiarized Op-Ed From Carson

An op-ed penned this month by Republican presidential candidate Donald Trump and published online appears to be blatantly plagiarized from an article written days earlier under former rival Ben Carson’s name, The Daily Caller has determined.

The similar op-eds were written on the topic of America’s territories and commonwealths.

Both pieces appear under the by-lines of the candidates. Carson’s piece, published Feb. 26, was published in the Marianas Variety in the Northern Mariana Islands.

Trump’s op-ed — published in the Pacific Daily News in Guam, part of the USA Today Network — was published 12 days later on March 9.

Ben Carson responds to Daily Caller story about Trump lifting his op-ed, says on CNN: “It doesn’t bother me at all.” pic.twitter.com/LKYRftAC0c

Is it November yet?

Well, I guess we can say that Carson has the whole “fuzzy logic” thing knocked.

And now we can add theft (plagiarism) to the catalog of Mr. Establishment’s various and sundry wrongs.

Plagiarism is not theft. In academic work there is an expectation of originality. In sermons or political speeches there is none, and it is perfectly acceptable to use material one saw somewhere else.

Joe Biden got in trouble, not for lifting Kinnock’s words, but for lifting his life. Had Biden’s grandfather also worked down t’pit, he would have had every right to use Kinnock’s words about it. But he didn’t, so it was unacceptable for Biden to say that he did. Of course back in college he got in trouble for straight-out plagiarism, copying someone else’s work in a context where that was not acceptable, i.e. submitting it for grading as original work.

Yes, the Kinnock plagiarism was the first instance to be noted, but then reporters noticed trends like plagiarising RFK and inflating his law school performance. I remember the RFK item but did not remember the Kinnock bit. I think his overall propensity to exaggerate and steal showed a lack of integrity. And I think Trump has demonstrated the same, but in different ways. Not just plagiarism.

Well, if you’re looking for evidence of Trump’s dishonesty, there’s an embarassment of riches. The man is an outright fraud and confidence trickster. But accusing him of plagiarism doesn’t make sense, because it isn’t a concept that applies to opinion columns by people who aren’t professional wordsmiths.

Biden’s an old fraud too, but the only time he was actually guilty of plagiarism was in law school. Which he did.

Just as a preacher can outright read someone else’s sermon from a book, making no prense of having written it, an opinion writer or blogger can with perfect honesty repeat other people’s words, if he agrees with them and thinks they express what he thinks better than he could himself. It’s not illegal, it’s not unethical, it’s not immoral, and it’s not fattening.

1) where did I express admiration for Trump? I did not. That was your inference. An incorrect one. I was doing an analysis of what I perceived to be the power dynamics in play.

I have a long history of pro-Cruz comments. I believe my analysis to be correct.

2) if you have a preferred term to beta male for someone who vies for leadership but then rolls over and enables a new alpha, I am open to it. But I think it is correct.

The beta is an enabler of alpha males who will take over if the alpha exits the stage in ethology. It is not as insulting as an omega, which is considered of lowest communal caste status and scapegoats.

These would be leaders who turn around to enable Trump – like Christie – are betas.

My scorn is reserved for the unwillingness to fight for their principles and for this they should be exposed.

3) plagiarism can have legal repercussions. You are the muddled one

It is not muddled thinking you are flat out wrong. I cited a specific example – copyright infringement – that can result from plagiarism.

And stop spreading legally bad advice. My comment was not to defend or criticize the article ghost written for Trump but to correct the mis- impression that others were spreading that there are no legal consequences. In some circumstances there are.

This is partly a legal blog.

4) my criticism of Carson stands

What a phony stance he takes for principles – and how easily bought in my opinion. Good riddance.

It would not surprise me when Donald Trump does it he is doing it to mock Ben Carson. Same action but completely different assessment of what is going on

Plagiarism and copyright infringement are completely unrelated concepts. Mixing them is a sign of muddled thinking. Using “beta male” as a pejorative, and admiring someone for “signalling power”, is a sign of much worse. Thinking that is not so much muddled as corrupt and perverted. Power-worship is perhaps the worst kind of idolatry, one that leads directly to the gas chambers.

Trump did say that he could shoot someone on Fifth Avenue in broad daylight and not lose supporters.

Compared to murder, calling someone a child molester and plagiarism are small potatoes.

Very, very disappointing that Dr. Carson has thrown his lot in with Trump.

Trump is beginning to look more and more like obama. Takes credit for other’s works and has no shame saying he did it himself.

Carson has shown himself to be a sad facade of what he projected himself to be. Too bad people didn’t find out before they wasted their vote and their money on him.

I like Ben. If he is on the Trump team, I am that more likely to vote for Trump.