End the generations of obfuscation 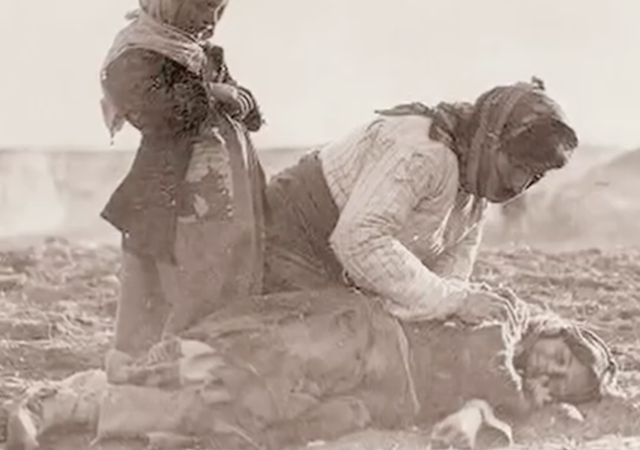 The subtext in Secretary of State Kerry’s agonizing over whether to label ISIS’s systematic, premeditated rape and slaughter of Christians, Yazidis and Shi’ites in Syria is what it means for the million-and-a-half skeletons in Turkey’s closet.  There is little objective doubt that during World War I, Turkey murdered around 1.5 million Armenians, but Turkey cannot abide the least suggestion that it engaged in genocide, and the US has thus far deferred to Turkish sensibilities.

The US’s failure to recognize the Armenian Genocide and Turkey’s culpability, and to induce Turkey to learn from that dark period in its history undermines the US’s ability to identify and condemn genocide elsewhere.  This is the undercurrent in Secretary of State Kerry’s bizarre inability to call a spade a spade in Northern Syria.

In brief, the 2015 omnibus spending bill included a requirement that the State Department make a determination of whether ISIS was engaged in genocide.  Anticipating and perhaps hoping to guide the results of that State Department review, on Monday the House of Representatives passed an unanimous resolution declaring that ISIS’s actions are genocide.  That resolution has no legal effect.

Wednesday, the State Department said it would not meet this week’s deadline, but at some point Kerry changed his mind and finally admitted Thursday what we all know.  Yes, ISIS has perpetrated genocide in Syria.

Echoes Of The Armenian Genocide

For Kerry and the State Department, the difficulty is that labeling ISIS’s behavior genocide opens the door to Armenians calling once again for recognizing their own suffering.

The connection is imperfect, of course, but no less obvious.  For one, the victimized Armenian population was concentrated just across Syria’s Northern border in modern Eastern Turkey.  Both Turkey and Syria were, at the time, part of the Ottoman Empire, and it is believed many Armenians died amid forced marches into Syria itself.

There are other parallels, if a bit strained.  A hundred years ago, Muslim Turks slaughtered Armenian Christians, today ISIS slaughters Christians, Yazidis and Shi’ites.  A hundred years ago, Turkey acted amidst the chaos and distraction of first World War; today ISIS’s crimes come amid the broader chaos of the Syrian civil war and Iraq’s re-descent into chaos.  Turkey, too, is using the cover of anti-ISIS operations to act out another ethnic hatred, this time against the Kurds.

And of course the scale of the Armenian Genocide dwarfs ISIS’s crimes by nearly two orders of magnitude.

So why hasn’t the US acknowledged the Armenian genocide?  Because Turkey refuses to, and really doesn’t want us to, either.

According to Defense One, that hasn’t stopped other branches of government less influenced by foreign feeling from taking a more principled stand:

Each year, on Apr. 24, Armenians all over the world honor the dead, along with the governments of more than 20 nations, including Canada, Sweden, Italy, France, Argentina, and Russia, to name a few.

The United States of America—home to the second-largest Armenian community outside of Armenia—does not.

On Mar. 18, 2015, four US congressmen—representatives Robert Dold of Illinois, Adam Schiff of California, David Valadao of California, and Frank Pallone of New Jersey—introduced a bipartisan resolution to formally recognize the Armenian genocide at the federal level. According to a press release, the Armenian Truth and Justice Resolution “calls upon the administration to work toward equitable, constructive and durable Armenian-Turkish relations based upon the Republic of Turkey’s full acknowledgement of the facts and ongoing consequences of the Armenian Genocide.”

That last part is important. If you’re wondering what’s kept the US government from recognizing the Armenian genocide all these years, the answer is simple: the Republic of Turkey. The successor state to the Ottoman Empire has adamantly denied the Armenian genocide for decades—preferring to characterize the violence as part of the broader chaos that broke out in the wake of World War I. Historians generally agree that Turkey’s Armenians were targeted for supposedly cooperating with the Russians during the war. Others, however, point out that interethnic animosity between Turks and Armenians stretches back hundreds of years.

In 2014, members of the US Senate Committee on Foreign Relations adopted a resolution to “remember and observe the the anniversary of the Armenian Genocide on Apr. 24.” Turkey’s government objected strongly, claiming the verbiage (referring to the conflict as a “genocide,” to be precise) “distorts history and law.”

“We condemn those who led this prejudiced initiative,” the Turkish foreign ministry wrote in a statement.

. . . despite what appears to be blatant doublespeak on the part of Turkish lawmakers, the US government remains steadfastly silent on the issue. At the same time, it’s not exactly difficult to determine why. Given the fraught nature of US operations in the Middle East today, it’s likely the nominal recognition of the Armenian genocide isn’t a top priority for the White House or state department—Turkey being a key regional ally.

Turkey’s response to US legislative movement tells the story – the Turks are not prepared to face their past.  That simple fact, and Turkey’s geopolitical strategic importance has skewed the American response for generations.

During the Cold War, Turkey was NATO’s Eastern-most member and gave access to the Black Sea and Central Asia.  Since the end of the Cold War, Turkey has provided access to Iraq (twice) and other Middle-East hotspots.  Presidents and Secretaries of State have deemed Turkey’s cooperation too vital to risk recognizing remote crimes.

That risk remains.  US/Turkey, NATO/Turkey and EU/Turkey relations are all already strained after 15 years of an increasing Islamist bent and declining freedoms in Turkey, and a migrant crisis that threatens to rip apart the EU itself.  Acknowledging the Armenian Genocide would exacerbate these tensions.

Time To Confront The Past

“The U.S. House of Representatives sent a message around the world by declaring the atrocities being committed against ethnic and religious minorities in Iraq and Syria is an act of genocide.

“This is a seminal moment for the House to have taken up the resolution and passed it unanimously” . . .

“The passage of this resolution is deeply meaningful to me as the only Member of Congress of Assyrian and Armenian descent. This genocide is a repeat of what my family endured. My grandparents were being persecuted and hunted down in the Middle East because they were Christians.

“I pray for the day that there will be peace in the region so that these ancient faith communities will be safe in their ancestral homeland. The stability and the cultural identity of the Middle East depend on this[.]”

Eshoo is right.  ISIS’s crimes are part of a pattern of horrors in the Middle-East, where ethnic cleansing remains the norm in times of war.  From Saddam Hussein’s chemical attacks on Iraqi-Kurdish civilians, to the Shi’ite/Sunni sectarian terrorism of the mid-2000s, widespread anti-Christian violence, and the total ethnic cleansing of Jews across the Arab world over the last half-century, ethnic, racial and religious violence is endemic.

The Armenian Genocide is part of that pattern, too, and the US should be speaking out against all of it, honestly and without blinders.

Past time to tell the truth. Turkey can take a long walk for all I care.

A little bit disingenuous for the right to call for this now after giving heat to Pelosi for asking for this during the Bush years.

Turkey has convinced itself that the Ottomans did it, it wasn’t them. And the Ottomans just accidentally mislaid them anyway, and besides, it was probably a Jewish plot. And also, the Kurds don’t exist, they are just ‘mountain Turks.’ And by the way, just take over the news media and throw all journalists in jail.

I don’t agree with a lot of Carlin’s views on his other podcast, but he almost always nails it on his history series. WWI was not pretty and Turkey is far from the worst offender in stupid inhumane moves during that war.

Islam is a genocidal ideology that advocates eliminating all who reject Allah and Mohammed. Remember – genocide is not just killing people, it is systematically destroying cultures, ethnicities, races, or religions. Under Islamic law, those non-muslims who are not killed are subjugated. They cannot openly practice their religion, they cannot build new houses of worship or repair old ones. They cannot attempt to convert others. They cannot stop a muslim from attempting to convert family members. They cannot hold power. They are limited in jobs and income, so it is difficult for them to raise families. They face the death penalty for even minor infractions, while muslims can kill them with nothing more than a fine as punishment.

The whole ideology is about genocide of everything and everyone non-Islamic.

One town in SoCal takes a step in the right direction: Glendale schools first in U.S. to make Armenian genocide remembrance day an official holiday: http://www.latimes.com/local/lanow/la-me-ln-armenian-genocide-day-glendale-schools-20160317-story.html