and years later tried to shut down an appearance 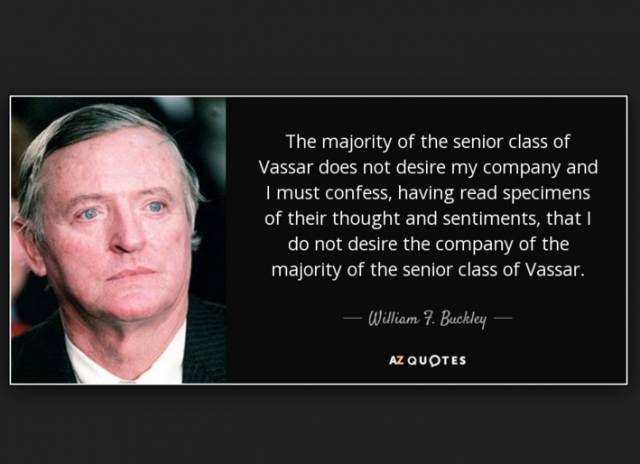 One question I frequently get is something along the lines of “How did college campuses get this way?”

And by “this way” people refer to the leftist intolerance of opposing viewpoints, now expressed through the misnomered “social justice” movement and Social Justice Warriors. My response is pretty consistent, that we abandoned the campuses and what you are seeing now was one or two generations in the making.

What you are seeing play out now in the intolerance at Vassar related to Israel — and many other campuses such as Oberlin College — is just a variation on a theme that has been growing for decades.

A reader, who is a Vassar alum, send me an interesting historical anecdote.

William F. Buckley, Jr.’s was invitated to be commencement speaker at Vassar in 1980. 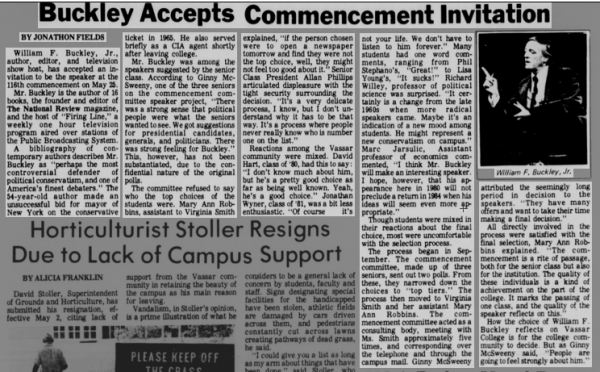 That invitation and acceptance sparked student protests, with over half the Senior Class signing a petition demanding Buckley be disinvited.

In response to the protests, Buckley withdrew. But not before some classic Buckley stile barbs as the students. This entry on the Vassar Chronology section recites Buckley’s response (emphasis added):

On May 19th, responding to campus protests over his selection as commencement speaker, conservative editor and commentator William F. Buckley Jr. withdrew his acceptance. In a letter to President Smith, a copy of which he sent to The New York Times, Buckley said, “The majority of the senior class of Vassar does not desire my company and I must confess, having read specimens of their thought and sentiments, that I do not desire the company of the majority of the senior class at Vassar.” Calling Vassar students “a fearfully ill-instructed body,” Buckley noted that “I have spoken, I suppose, at 500 colleges and universities in the past 30 years and nowhere have I encountered that blend of ferocious illiteracy.”

Retiring Professor of Biology Francis V. Ranzoni and senior class President Alan Phillips ‘80 spoke at the May 25th Commencement, to which, under their commencement robes, a number of seniors wore T-shirts proclaiming themselves as “ferocious illiterates.” 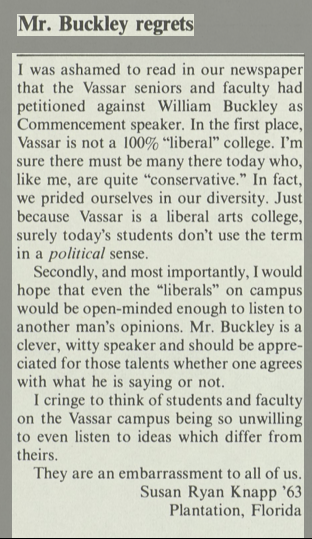 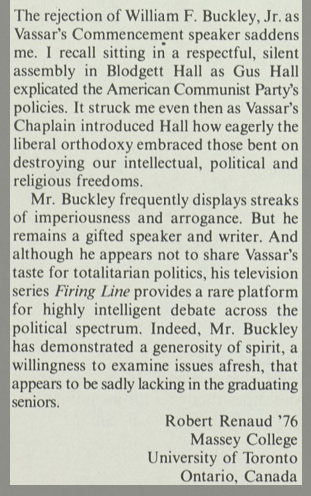 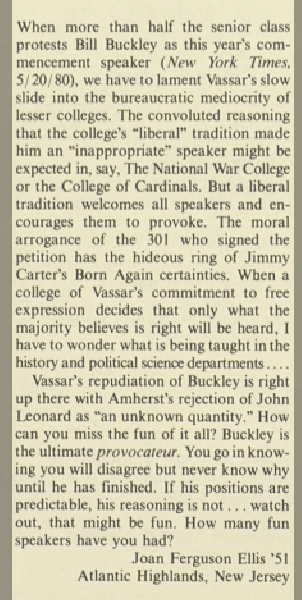 Apparently as some later date Buckley did appear on campus, to wild protests, as reflected in this 2009 book review by Jonathan Karl at The Wall Street Journal:

Some two decades ago, ­William F. Buckley, Jr. came to Vassar College to give a speech at the place where, years earlier, he had met his future wife, Pat. As Buckley spoke inside an ornate hall in a grand gothic building, protesters gathered outside in the pouring rain. It wasn’t clear why they were targeting Buckley; their signs denounced apartheid and U.S. policy in South America. One tall, bearded protester inexplicably dragged an 8-foot wooden cross over his shoulder. As the rain came down harder and the sky grew darker, the protesters pressed against the ­windows. Suddenly the power went off. In the darkness, it seemed a riot was about to break out. “It’s all right, Bill,” I heard somebody in the ­audience yell. “The liberals just want us to see the world the way they do.”

Buckley may have been America’s leading conservative intellectual, but inside that hall and on that campus, He was the radical, and he loved it. As the lights came back on, he continued with his speech, delighted in being the gadfly, the one questioning ­authority, the one with a mission to change the world. The soggy and ­angry protesters outside represented the mainstream, socially acceptable views shared by the vast majority of Vassar students and faculty. 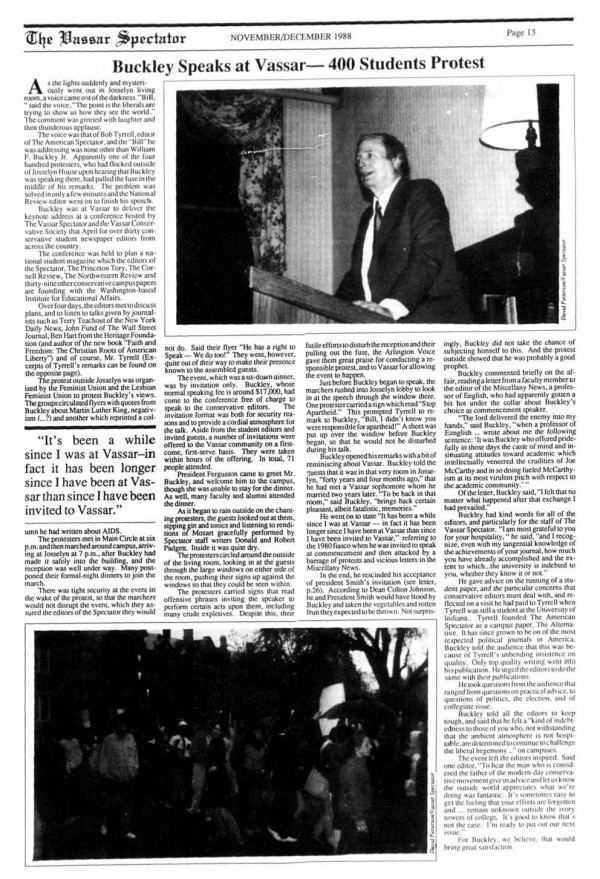 Marc Thiessen, a Vassar student at the time and later head speechwriter for President George W. Bush, recounted that appearance at National Review in 2008:

The campus left immediately sensed something was amiss … and word soon got out that BILL BUCKLEY! was coming to campus in a matter of hours. With proletarian intensity, they mobilized their forces, amassing an army of 350 to march on Jocelyn Hall to protest the alien presence. It was a rainy evening, but the foul weather did not deter them. Soon Bill arrived, and we escorted him through a side door into the dining hall. And so there we were, the campus Right, drinking wine, smoking cigars, listening to Mozart, and dining with our hero, William F. Buckley — while, outside, in the driving rain, was the campus Left, noses and signs pressed against the glass windows lining either side of the ornate dining hall….

As he spoke, the protesters outside grew increasingly agitated — and eventually they broke into the lobby. They were prevented from rushing into the dining hall and venting their Jacobinal rage only by the brave efforts of the Vassar men’s rugby team (yes, such a thing exists) who stood guard at the door. One of the protesters did manage to sneak into the basement and cut the power, leaving us in total darkness. After a few moments of confusion, Bob Tyrrell’s voice emanated from the pitch black: “Bill, I think the Vassar student body is trying to show us how they see the world.” Raucous applause, soon the lights came back on, and our hero continued his remarks, enthralling his audience. It was night to remember….

What has changed? I’m sure today’s senior class could not spell “ferocious illiterates” let alone tell you what it means.

I have been to enough schools to know that “student” protests are the work product of professors, who should be named.

I have been to no schools that have had any protests, junior colleges all, but my conclusion was the same. These things are organized and promoted by worthless faculty not the students.

“It’s all right, Bill,” I heard somebody in the ­audience yell. “The liberals just want us to see the world the way they do.”

Give that man a cigar! If he didn’t already have one. 🙂

Next thing you know, they’ll demand the State rename the James L. Buckley building in Albany, and they’ll tear down the signs from the Buckley Bridge.

Poor darlings, still in the dark. So sad….

“Liberals claim to want to give a hearing to other views, but then are shocked and offended to discover that there are other views.”
William F. Buckley Jr.

I actually had a conversation with Gus Hall one day. I came away with the impression that he was one of the stupidest people with whom I’ve ever spoken.

Simple, really. By 1980, the left had run out of rational arguments already. They could not rebut conservative thought, even after the fact with unlimited time to construct their arguments. Their only remaining choice became to shut down the conservative voices, and they have been doing so – ever more aggressively – ever since.

Progressives…”creating man in their own image”.

“And so there we were, the campus Right, drinking wine, smoking cigars, listening to Mozart, and dining with our hero, William F. Buckley — while, outside, in the driving rain, was the campus Left, noses and signs pressed against the glass windows lining either side of the ornate dining hall….”

That’s straight out of Ayn Rand.

The world became a sadder place with his demise.