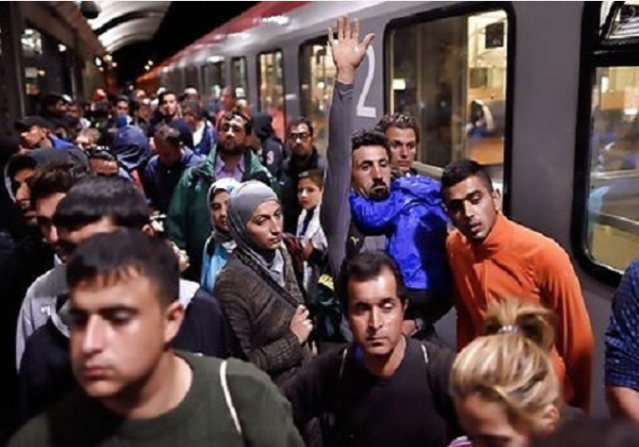 James Traub writes in Foreign Policy on the situation facing Sweden in its attempt to absorb the recent wave of Syrian/Iraqi/Afghan newcomers.

At the outset of the article, the author may seem to be leaning towards blaming Europe for not being more magnanimous, and to be making a false analogy to WWII refugees—who may indeed have been from other countries, but who nevertheless were part of the same basic Judeo-Christian culture as the Swedes and held pretty much the same values.

But that’s actually not at all the direction in which the article ultimately goes, nor is it the way a lot of people in Sweden seem to be going at this point. And the trend may continue. But it’s hard to talk about it in Sweden:

Diana Janse, a former diplomat and now the senior foreign policy advisor to the Moderate Party (which Swedes view as “conservative”), pointed out to me that some recent generations of Swedish refugees, including Somalis, had been notably unsuccessful joining the job market. How, she wondered, will the 10,000-20,000 young Afghan men who had entered Sweden as “unaccompanied minors” fare? How would they behave in the virtual absence of young Afghan women? But she could barely raise these questions in political debate. “We have this expression in Swedish, asiktskorridor,” she said. “It means ‘opinion corridor’ — the views you can’t move outside of.” Merely to ask whether Sweden could integrate Afghans today as it had Bosnians two decades before was to risk accusations of racism.

Although in this country we don’t use the term “opinion corridor,” we’re certainly familiar with the concept. And Europe seems to be far worse than the US in that respect.

The author then goes on to interview a refugee arriving in Malmo—and this refugee really is a refugee, because he’s a Yazidi from Iraq. As such, he seems to not be aware that, now that he’s in Sweden, he might be crossing the boundaries of the Swedish opinion corridor when he says this:

I asked Edo why he didn’t stay in Diyarbakir. Krit relayed my question, and then replied, in a whisper, “He says, `I can not live with Muslims.’” I pointed out that Diyarbakir was a largely Kurdish city. Krit, amused, said to me, “You have the black dog and the white dog, but they’re both dogs.” Given Swedish hypersensitivity to ethnic stereotyping, I’m hoping that Edo did not try out that expression at his asylum interview.

The following is how Sweden is “vetting” its immigrants. It is apparent that the policy is dangerously—almost insanely—naive [emphasis mine]:

The Swedish Migration Agency is responsible for deciding who does and does not receive asylum. The agency assumes that anyone fleeing Syria has a well-founded fear of persecution or death, and thus automatically accepts such applications. Large majorities of Iraqis and Afghans are also accepted. Sweden does not take economic migrants; for this reason, authorities deny almost all migrants from Albania or Kosovo. At the same time, Sweden has made only the most modest efforts to ensure that rejected applicants actually leave.

I suggest you read the whole thing.

But there is evidence that more Swedes are entering the no-go zone of the opinion corridor:

Back at the Red Cross station, opinion was surprisingly anti-refugee, including among volunteers. The translator said that he did not believe many of the new arrivals would ever be able to integrate into Sweden’s liberal, individualistic society. A border policeman told me, “Last summer, my grandmother almost starved to death in the hospital, but the migrants get free food and medical care. I think a government’s job is to take care of its own people first, and then, if there’s anything left over, you help other people.” I had heard the same view a few months earlier in Hungary, the country in Europe most outspokenly hostile to refugees — the anti-Sweden. Europe has not experienced economic growth in almost a decade. One could hardly think of a worse moment to ask citizens to make sacrifices on behalf of outsiders.

I’ll close with this startling fact:

Unlike Americans, Swedes do not raise the subject of terrorism when they question the virtues of accepting asylum-seekers. I arrived in the country days after the Paris attacks, and I expected to hear a pitched battle over the dangers to national security posed by the newcomers. Scarcely anyone raised the issue. Sweden has not suffered a serious attack on its soil; the national mood could change very quickly if it did. But the issue that is raised — in Sweden as in Germany, Hungary, and all over Europe — is national integration.

As I said, the whole thing is worth reading.

Not yet. But it’s probably just a matter of time now.

And what happens when all these un-integrated and un-employed “refugees” start rioting and burning cars (or worse) the way they routinely do in France? What are all the “diversity”-worshipping fools in Sweden’s government going to do then? Pass more laws prohibiting “hate speech” about the horribly dangerous situation their stupid governance has wrought?

I am just wondering what they deem “serious”? Violence has been going on for years now.
What about the IKEA attack?
The Malmo violence- car burnings, etc.?
The grenade attacks?
http://pamelageller.com/2013/05/muslim-riots-grow-in-sweden-cars-burn-in-fifth-night-of-rampant-violence-burning-cars-smashing-windo.html/
Malmo
https://www.youtube.com/watch?v=S68NP1tYUr8
http://www.amren.com/news/2013/05/sweden-burning-stockholm-riots-and-violence-enter-4th-day/
http://www.jihadwatch.org/2015/08/sweden-30-grenade-attacks-in-6-months-in-muslim-dominated-malmo
http://www.usatoday.com/story/news/world/2013/05/25/sweden-riots-violence/2360211/

One would think that Swedish women would disagree with your opening quote. Look up the rape statistics. It’s horrifying.

Yes, the author was referring to a terrorist attack with multiple casualties, but the rapes and other violence by the “refugees” have already been bad enough. The Swedes should not have to wait for a 9/11-style attack before putting a stop to this insanity.

I second reading that whole piece. Startling to think that the refugees with children under 7 can actually get the parental leave now that they have successfully transited to Sweden. People do not appreciate what a statutorily enacted welfare state can force until you read elements like that.

That akitskorridor makes far more sense if we are aware that Scandinavian classrooms push this concept called the Ladder of Cooperation. The practices that go into an opinion corridor get formed as habits over years of schooling.

http://www.invisibleserfscollar.com/openly-admitting-global-coordination-to-impose-behavioral-programming-using-education-and-the-law/ quoted the Finnish Ladder of Cooperation and also that unappreciated affirmative obligations in American school districts’ Student Codes of Conduct have been surreptitiously pushing this here in recent years. It is being treated as a necessary element of a Positive School Climate.

We too are about to have Opinion Corridors and not just as a product of some militant professor in the first year at university. Making these practices a K-12 mandate as Scandinavia has done causes them to be neurologically embedded at an unconscious level.

I tend to have little sympathy for people who have chosen to commit suicide.

Seems to me, in most of socialist Europe; starry-eyed generosity is quickly being replaced by it’s more insidious little brother – white guilt.

To call Sweden a liberal, individualistic society is a misnomer.

Individualism is frowned on. Thus, the PC corridor itself, and the group mentality that helped in the creation of its mess in the first place. Yet, ironically, many individuals fume inside.

Looks like the changes in Sweden have begun. It will be messy and may end up in the streets.

It also goes beyond the issue of criminality (such as Europe is suffering) and unemployment and welfare dependency.

The bigger issue includes questions like:
* Whether Abercrombie et al. must change their employee dress code
* Whether schools must change their menus and holiday schedules
* Whether employers must allow some people to take “prayer” breaks during the day, sometimes shutting down production lines
* Whether courts should apply laws (e.g. regarding domestic violence) differently in deference to a particular religious creed
* Whether we as free citizens have the right to draw cartoons and label them “Muhammad.”

Donald Trump thought it was very wrong to draw pictures labeled “Muhammad” because it offends Muslims. He has called Pamela Geller a terrible person because she’s been sounding the alarm about Islamic violence and creeping sharia for many years, while Trump has apparently not bothered to “figure out what the he!! is going on.”

And yet some of his besotted fans imagine that he’s the only person who will make sure their daughters don’t have to wear a burka.