He understood that the Constitution empowered the People, not the Judiciary 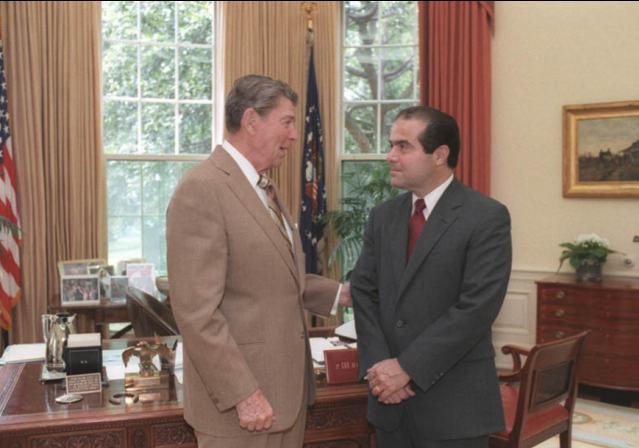 The unexpected news that Antonin Scalia died was a punch in the gut.

It reminded me of when I first heard that Andrew Breitbart had died — my wife saw it on Twitter and asked whether it was true. Her comment about Breitbart applies equally to Scalia, A personal note on the death of Andrew Breitbart:

Scalia was more than just a Justice. He was the embodiment of resistance to liberal political correctness and social justice war perpetrated through the judiciary rather than the electorate.

I never met Scalia, but I heard him speak once at the Justinian Society in Providence, Rhode Island. He was larger than life, had total command of the room packed with 150 or more lawyers, and was incredibly self-deprecating. And we all laughed so hard at times it’s a miracle no one choked on lunch.

There are other judges who have sound constitutional principles, but none with the humor and wit of Scalia. He was the conservative judicial rock star. Scalia’s use of language in the defense of the Constitution was legendary, and damn funny.

Scalia’s Dissent in the Obamacare II (subsidies) case was a paradigm of Scalia’s wit, humor and constitutional intergrity. Here are the most quotable lines from his dissent (emphasis added):

1. “This Court, however, concludes that this limitation would prevent the rest of the Act from working as well as hoped. So it re-writes the law to make tax credits available everywhere. We should start calling this law SCOTUScare.”

2. “The Court’s next bit of interpretive jiggery-pokery involves other parts of the Act that purportedly presuppose the availability of tax credits on both federal and state Exchanges.”

4. “The somersaults of statutory interpretation they have performed … will be cited by litigants endlessly, to the confusion of honest jurisprudence.”

5. “It is bad enough for a court to cross out “by the State” once. But seven times?”

6. “The Court’s decision reflects the philosophy that judges should endure whatever interpretive distortions it takes in order to correct a supposed flaw in the statutory machinery. That philosophy ignores the American people’s decision to give Congress “[a]ll legislative Powers” enumerated in the Constitution.”

And from Scalia’s oral dissent from the bench:

7. “The Court solves that problem (believe it or not) by simply saying that federal exchanges count as state exchanges only (and this is a quotation from the opinion) “for purposes of the tax credits.” How wonderfully convenient and how utterly contrary to normal principles of interpretation.”

Miriam Webster felt is necessary to have an explanation of Scalia’s use of “jiggery-pokery”:

Jiggery-pokery (meaning “dishonest or suspicious activity”) is a fine example of what is referred to as rhyming reduplication, and Scalia appears to have more of a fondness for this type of language than do most of his fellow justices (he used the phrase argle-bargle several years ago in another decision).

Prof. Glenn Reynolds has some other choice quotes which demonstrate that Scalia understood that the Constitution empowered the People, not the Judiciary:

“One of the benefits of leaving regulation of this matter to the people rather than to the courts is that the people, unlike judges, need not carry things to their logical conclusion.”

“The virtue of a democratic system with a First Amendment is that it readily enables the people, over time, to be persuaded that what they took for granted is not so, and to change their laws accordingly. That system is destroyed if the smug assurances of each age are removed from the democratic process and written into the Constitution. So to counterbalance the Court’s criticism of our ancestors, let me say a word in their praise: they left us free to change. The same cannot be said of this most illiberal Court, which has embarked on a course of inscribing one after another of the current preferences of the society (and in some cases only the counter-majoritarian preferences of the society’s law-trained elite) into our Basic Law.”

To say that Scalia is irreplaceable is not an overstatement.

I feel like I got punched in the gut after hearing this news.
There is no one who could replace this great man. No. One.

To say that Scalia is irreplaceable is not an overstatement.

True, but even a ‘almost Scalia’ would still be preferable to anyone Obama is likely to come up with.

Comparing news of Scalia’s unexpected passing with that of Breitbart’s is interesting.

So many reasons to doubt so much.

Update: see what Drudge is headlining . . .

” . . . We discovered the judge in bed, a pillow over his head. His bed clothes were unwrinkled,” said Poindexter. . . ”
http://www.mysanantonio.com/news/local/article/Texas-ranch-owner-recalls-Scalia-s-last-hours-6830372.php

And per Washington Post link (paywall):
“It wasn’t a heart attack” and some curious procedural irregularities.

Good post. I also recommend Glenn Reynolds’ USA Today column. Also. clafoutis’ comment above will undoubtedly get a lot of print. My first thought upon hearing the news was they all news outlets were quick to emphasize that his passing was from natural causes. Every. Single. One.

What happens now? They started hearing cases in Oct. Have any of those been voted on, and would that vote still hold if the decision has not been announced?

“Scalia was more than just a Justice. He was the embodiment of resistance to liberal political correctness and social justice war perpetrated through the judiciary rather than the electorate.”

An excellent piece, Prof. Jacobsen, but the above really stood out to me. I agree that the news was like a physical blow; what an enormous loss for our nation.

I, too, related hearing the news of the good Justice Scalia’s demise to when I heard that Andrew Breitbart died. A great loss for our nation, for the conservative voice, and for strident and principled dissent.

I cannot find words to adequately express the extremely mournful and fearful sentiment that this great man’s untimely death causes in me.

The Republicans must dot every ‘i’ and cross every ‘t’ to definitively block Obama from appointing a replacement, and we as conservatives must be like the Hounds from Hell in making sure we hold them to it! Despite the pit we all feel in our stomach and the ache in our hearts.

I admit to feeling a somewhat selfish response, as in “How could you leave us so vulnerable like this?” But of course Scalia himself would have preferred to keep being our leading champion against the arrogant overlords for a lot longer. And we can be profoundly grateful for what he has done.

“It is bad enough for a court to cross out “by the State” once. But seven times?”

I suspect Antonin would have admonished Perfesser BJ for crossing out “natural” from the natural born citizen clause.

It appears that there is a Senate resolution codifying what McConnell and Cruz are saying, which contradicts the MSM and Chuck U. Schumer’s insistence that Obama MUST be the one to replace Scalia on the bench, before the election:

From the American Thinker: Dems in Senate passed a resolution in 1960….

A follow-up story on this, the lightening-speed, most politicized death in recent history? Please? 🙂