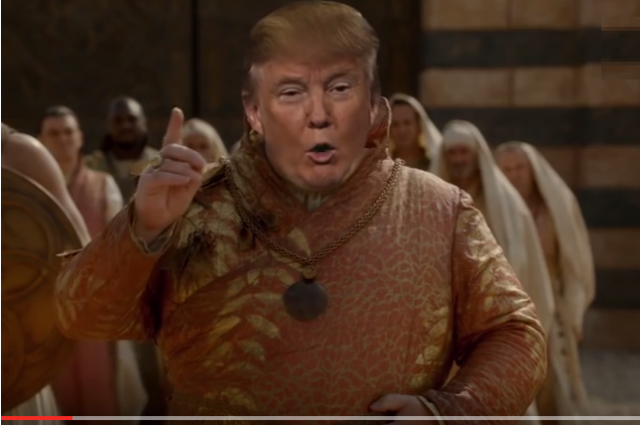 Being a big fan of Game of Thrones, I am really looking forward to the season 6 premier of the hit HBO series.

Saturday night, I couldn’t help but compare the end of Governor Jeb Bush’s campaign to the unexpected loss of key characters that regularly occurs during episodes of the show.

The result is pure comedy gold. We get a review in Trumps’s own words about the importance of building the wall, protecting citizens from Muslim terrorists, the art of the deal, the usefulness of waterboarding, and the recent exchange with Pope Francis.

Viewers had a few thoughts regarding which character best fit Trump’s personality. My favorite was an analogy to Stannis Baratheon, Lord of Dragonstone.

Trump is Stannis. He is relentless, was initially considered an underdog, and will stop at nothing to see his goals recognized. He is either loved and admired or hated and feared, and his supporters are devoted and will follow him to hell and back.

“When you play the game of thrones, you win or you die. There is no middle ground.”

Or, in the case of today’s political climate, you retire to be a political analyst on a cable news show! No matter what he does in the next phase of his life I suspect Jeb won’t be reporting for duty along Donald’s big wall.

I would love to read other Game of Throne analogies from Legal Insurrection fans. Who is the next one who will meet their fate in the primary battle?

It’s so yugely awesome, Trump must have made that video.

My wife laughed at “The wall is going to have a door.”

“Who is the next one who will meet their fate in the primary battle?”

All of those without the last name Trump. By Super Tuesday it would appear.

Looks like the party’s plan to have the nomination wrapped up early will come to fruition. Good news. More time for nominee Trump to make Hillary’s life miserable.

Why would he want to “make her life miserable”? He’s already given her over $100,000 and paid her to attend his (latest) wedding,

Because she’s shifted from a “good person” who he “really likes” to an implacable enemy.

This extreme dichotomy is a characteristic of narcissists, and Der Donald is a deeply pathological, like Barracula.

But she can return to “good person” status.

Making Trumph a make-believe character reveals the reality of his cabal’s delusion.

Lord Phallacy, the conniver, lives with his Mini-Men in the yuge Domain of Coercion. He is no one you can trust. He is in league with his sister Hilldebeast and his brother Bernard the aged artifice.

Off with his nomination.

Now a word from our sponsor:
https://youtu.be/DYeYPcougmA

It cracks me up every time I watch it. Great editing job!