Riots ensure as passage to wealthy European nations is delayed 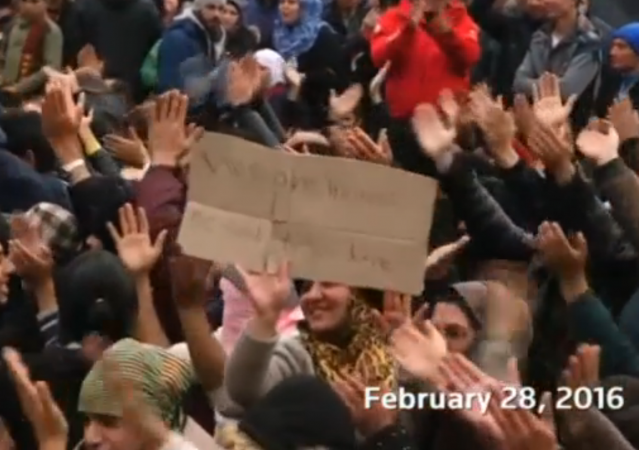 Iraqi and Syrian migrants rioting at the border used posts to break through the border fence and began hurling rocks at police officers. Macedonian police fought back with tear gas Monday.

Videos capture the extent of the rioting:

Police launch tear gas after rioters pull down part of the fencing:

Macedonian police fired tear gas to disperse hundreds of migrants who stormed the border from Greece on Monday as a deeply divided Europe traded barbs over the biggest humanitarian crisis in decades.

As frustrations boiled over at restrictions imposed on people moving through the Balkans, migrants trapped on the Greece-Macedonia border tore down a metal gate in the barbed wire fence.

A Reuters witness said Macedonian police fired several rounds of tear gas into the crowd and onto a railway line where other migrants sat refusing to move, demanding to cross into the country.

Greece raced to set up temporary accommodation for a build-up of thousands of migrants stranded in the country after Austria and countries along the Balkans migration route imposed restrictions on their borders, limiting the number of migrants able to cross.

Many of the migrants, fleeing war and poverty in the Middle East and North Africa, hope to reach Germany, which last year took in 1.1 million asylum seekers.

There were an estimated 22,000 migrants and refugees trapped in Greece on Monday, some sleeping rough in central Athens, some in an abandoned airport and at the 2004 Olympic Games venues.

Six months ago, Macedonia faced an identical situation. More migrants were demanding entry to the small country than it was able to accommodate. Then too, police were compelled to use tear gas to rebuff aggressive border protests:

The Telegraph reported in August:

Police officers fired the grenades directly into the crowd, injuring at least 10 people, as around 3,000 refugees tried to cross the border between the two countries.

In chaotic scenes, men tried to charge the police lines, while women and toddlers sobbed and some migrants fainted and fell to the ground. Medical workers rushed to their aid.

The clashes occurred a day after Macedonia declared a state of emergency, saying it could not cope with the thousands of refugees trying to cross its border in the hope of making their way north to wealthier countries in the European Union.

It’s an invasion, so it’s time to treat it as such. There is no right that a non-citizen has to enter another country no matter what.

Well, not exactly. The Y’urp-peons opened themselves up to this when they promulgated a new ‘international law’ that said that refugees had rights, and that a country couldn’t turn away ‘legitimate’ refugees.

Law fare then made the process of deciding who is ‘legitimate’ into a months-long, years-long exercise. All the while the ‘refugee’ is protected and has to be fed, clothed, etc.

Now if you’re dealing with 10 refugees that’s not so bad. 100 is manageable. Several million refugees? The system breaks. The Euros never thought they’d be dealing with millions of angry refugees when they wrote their laws.

Now they get to live with the results. Shades of Alinsky.

And, given how the Euros like to lecture us Americans on proper morality, it couldn’t have happened to a more deserving bunch…

They invited those people into their country. Their circus. Their monkeys.

When their countries implode, we must absolutely seal our borders against European refugees. Let them stay home and fight or die. Euronate on them. We don’t want their disease, here. We have enough of their kind already.

I doubt they’d have to kill many to send most scurrying back to the hell holes they emerged from.

“Riots ensure as passage to wealthy European nations is delayed”

I suggest “Riots ENSUE as…”

Stupid Euro’s, why are they afraid of widows and orphans?

President Obama is lashing out at Republican politicians who oppose allowing Syrian refugees into the U.S., accusing them of being “scared of widows and orphans.”

This is what machineguns are for.