Oklahoma School Staff Armed and Ready to Use Whatever Force Necessary

Oklahoma School Staff Armed and Ready to Use Whatever Force Necessary

“We don’t want to be a soft target” 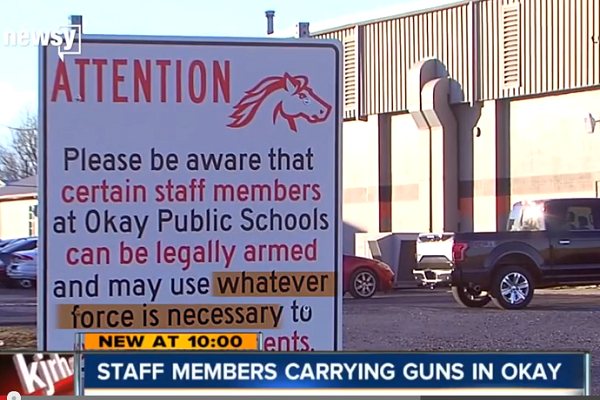 Last year, Professor Jacobson posted about a Texas school posting a sign that the staff is armed, and now, one Oklahoma school district is following suit and allowing teachers and staff to carry and to use whatever force is necessary to thwart potential attacks.

The Okay Public Schools Board of Education passed an “Armed School Employees” policy in August. On Monday, the district publicized that policy with signage in front of the school.

“The signs are more or less a deterrent,” Superintendent Charles McMahan said. “We don’t want to be a soft target.”

McMahan said his administration looks for ways to keep students safe and secure, particularly since the Okay Police Department was disbanded in December 2014. Although Wagoner County sheriff’s deputies are available, McMahan said it is “seconds, not minutes, that matter.”

Gun-free zones are soft targets; indeed, one former sheriff describes them as a “helpless victim zones.”

This move in the Okay school district is very likely to serve as a deterrent.  So far, however, there is only one Okay employee currently approved to carry in Oklahoma and now at school.

Apparently, however, it’s not enough to simply qualify by state law; the employees must also seek the approval of the local Board of Education before being allowed to carry on campus.

One Okay employee is approved to carry. For other employees to arm themselves, they must qualify with a Council on Law Enforcement Education Training certification or license; possess an Oklahoma Self Defense Act License; and be CLEET qualified with the firearm, according to the policy.

After an employee has completed the qualifications, they may submit themselves to the OPS Board of Education for approval before carrying, McMahan said. Okay is the only school in the Green Country area with an armed-employee policy, he said.

“Our standards are higher,” McMahan said. “We really wanted people to know this is serious to us; we don’t take this issue lightly.”

That district is more than “Okay” in my book!

Won’t this policy and especially the sign be offensive to criminals? Don’t criminals need safe zones too?

Six feet under is a “safe” zone — the only one they deserve.

And one person qualifies. Woo-hoo!

A textbook example of tokenism.

Big deal … you can carry a firearm if you’ve gone through law enforcement training (guess whose dime you’ll be on) and get a special dispensation from the school board.

The uncertainty alone may be sufficient to confound a potential abortionist.