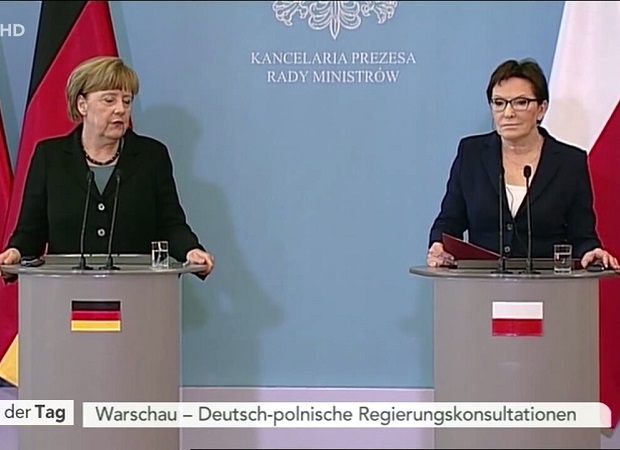 Amid a massive refugee crisis, the diplomatic relations between Germany and Poland have reached a post-WWII low.

The rhetoric coming from Germany has turned especially hostile in recent months. Leading members of Merkel’s government have talked about taking “punitive measures” against Poland and placing the country “under supervision.” Germany’s Deputy Chancellor Sigmar Gabriel has also called for economic sanctions against EU-members who refure to “shoulder the burden” and accept their “fair share” of migrants.

However, Berlin’s tough talk has been counterproductive and has only strengthened Polish resolve to oppose the open door migrant policy. Things have gotten so bad between the two countries that even the German state-run broadcaster Deutsche Welle had to admit that bilateral relations were now “in a free fall.”

Even the German carnival celebrations over the weekend caused a renewed diplomatic spat in this series. Poland registered its diplomatic protest to a parade float in Düsseldorf showing Polish leader Jaroslaw Kaczynski stamping his jackboot on the head of a woman depicting Poland. Goernment spokesman in Berlin promptly rejected Poland’s objections citing “freedom of expression.”

This would have be a valid argument, if German police themselves were not investigating into carnival floats in the states of Bavaria and Thuringia deemed “offensive” to Muslim migrants.

At the same time, German authorities and the mainstream media have been thin skinned when it comes to open criticism of official migrant policy, clubbing together every opposition to mass migration as racism and xenophobia.

Government spokesman Steffen Seibert said on Wednesday that Berlin would not interfere with carnival organizers in Düsseldorf about the controversial creation. “We have freedom of expression in Germany, freedom of art,” Seibert said, adding that this freedom would be maintained even if it became uncomfortable for those being represented.

The carnival float, created by organizers in Düsseldorf, depicted Poland as a woman being stepped on by a booted Jaroslaw Kaczynski, the leader of the conservative PiS party. The float was shown in front of Düsseldorf’s city hall for a short period after the traditional carnival parade on Rose Monday was canceled due to storm warnings.

On Tuesday, Poland’s Foreign Minister Witold Waszczykowski, also a PiS member, called the installation an “insult to Poland and Polish politicians” and said he would register a protest with Berlin.

Relations between Germany and Poland have suffered after the conservative PiS party took over the government. Last month, Berlin and Warsaw clashed because of Poland’s restrictive media laws and a reduction in the powers of Poland’s constitutional court. Polish Prime Minister Beata Szydlo is also against a distribution quota for refugees in the European Union, which has further worsened relations.

Last October, Chancellor Merkel’s migrant policy received a big blow when Poles elected a conservative government in a landslide on promises of securing country’s borders against the EU-directives and to strengthen traditional Catholic family values.

Despite a resounding rejection of previous Polish government’s liberal migrant policy by the voters, Germany and EU are refusing to take no for an answer.

After sexually-motivated attacks on the New Year’s Eve in the city of Cologne, the welcoming attitude of ordinary German’s towards to the “refugees” has all but faded away. Merkel is facing an open rebellion from her coalition partner Christian Social Union (CSU) and the anti-immigration AfD party is expected register a record performance in next month’s German regional elections.

In face of rising opposition and spiralling migrant situation, Merkel is doubling down on her open border policy. With support of the Social Democrats (SPD), she can comfortably govern till the end of tenure in 2017.

If that was not enough, Merkel has announced her ambitions to run for the fourth term as German Chancellor in 2017.

[Author is a current affairs analyst based in Germany]

Polish politics are unusual for Europe. Communism is discredited, and so the debates are between right winger who want to improve Polands standing in the EU, and right wingers who are “Poland before globalism.”

In either case, Poland wants to stay Poland and not get swamped by Muslims or by Europeans fleeing Muslims.

We won’t be able to make polish jokes anymore.

Once Germany falls, Poland and its neighbors will be the best hope for Europe.

Polish people have two traits and have had them for millenium.
They don’t fear cats as evil things. They don’t support excessive immigration.

Seems we are going through the same thing now.

Could the next president exercise his powers as CIC deport all non-citizen Muslims and stop new Muslims from entering the USA?

Germans demand extra “living space” in Poland? Where have we heard that before?

Otherwise Germany may be forced to attack a radio station on their common border.

I congratulate your post and nominate it for obscure reference of the day.

Hmmm has Merkel had any secret meeting with Putin lately?????

How about meetings with Obama, who couldn’t wait to cancel Bush’s planned missile defense base in Poland, designed to protect against missiles from Iran. I well remember that Obama managed to rub salt into the wound by timing the cancellation to coincide with the 70th anniversary of the Soviet invasion of Poland, also the anniversary of the very day that Molotov made his infamous radio announcement that the Polish government had “ceased to exist.” At the time, Merkel was ecstatic.

Poland’s newly elected Law and Justice party should plan to leave the EU.

Merkle is a bossy pants tyrannt who thinks she make a Utopia out of stick people.

Poland is one of my bolt-holes if the poo hits the blower here.

See, I get the surface appeal: they have a sensible culture as a result of seeing Commies up close and personal. But if stuff hits the fan here, Eastern Europe will be one of the first places to go up next.

No civilian gun ownership as I understand it. Apparently they didn’t learn that much from WWII and the cold war.

If every civilian in pre WWII Poland had owned a gun they wouldn’t have been so reliant on the weak kneed appeasers in Britain and the German’s fast roll would have come to a fast halt.

Come on Poland, who would you rather count on it hits the fan: Barack Obama and Merkel or your citizens who armed to the tooth? That question takes a nanosecond to answer.

“If that was not enough, Merkel has announced her ambitions to run for the fourth term as German Chancellor in 2017.”

Another example of Merkel’s fantastical thinking.

If you want to believe my in-laws in Germany, she better start checking the want ads.

I seem to remember something about Germans shipping its unwanted or excess population to Poland. You would think that Merkel would have some shame trying to bully the Polish about anything.

Of course, socialist forget nothing and learn nothing from history.