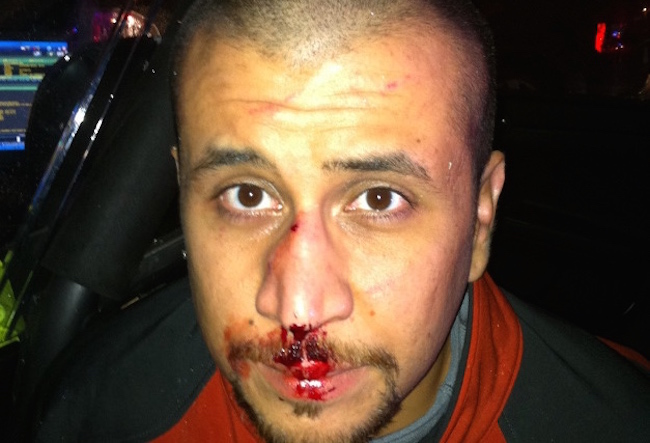 In that piece they describe a piece of fabricated (“virtual reality”) cinema that purports to tell the “true story” about the interaction between George Zimmerman and Trayvon Martin that resulted in Martin’s death.

The article notes that:

The promotional material for One Dark Night indicates, “By anchoring the piece in accurate and unassailable elements, the user becomes transported inside a reliable, albeit virtual, version of the story as an eyewitness. One Dark Night breaks new ground on multiple levels, including through audio carefully cleaned by forensic specialists Sourcesound and Primeau Productions, with the latter asserting that the reconstructed audio indicates George Zimmerman cocked his gun just before he gave chase.”

Except there’s one little problem with that narrative:

The pistol with which George Zimmerman successfully defended his life against Trayvon Martin’s attack (the vicious and sustained “ground-and-pound” beating delivered by Martin and as viewed and testified to by eye witnesses at trial) was a Kel-Tec PF9.  Here’s a photo: 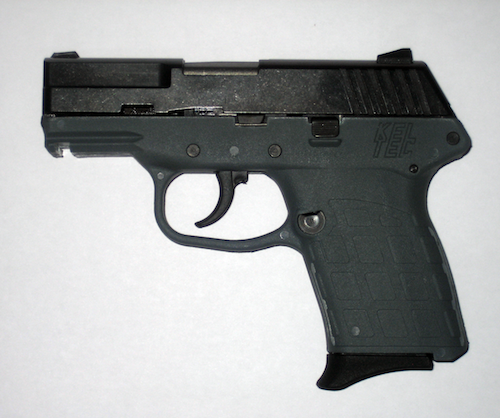 The reader will note that the PF9 does not have an exposed hammer to be directly cocked by hand.

In addition, the PF9 is what as known as a double-action-only firearm.  Even if there were a hammer to be cocked, it cannot stay in the cocked position–it simply returns to the lower rest position. Thus, even if one attempted to “cock the hammer” by cycling the slide, for example, the hammer would simply descend to its original lowered position, as is illustrated in the photo.  Thus, there is no purpose or advantage to “cocking the hammer” in such a fashion.

In addition, had an attempt been made to “cock the hammer” by cycling the slide, either a live round would be ejected to the ground or an unexplained round would be missing from the gun’s magazine.  The actual forensic evidence at trial absolutely contradicted both of these scenarios.

Finally, and ironically, one of the prosecutors in the Zimmerman trial was John Guy.  Prosecutor Guy spent much of the trial shrieking to the jury in outrage at the fact that Zimmerman was carrying around a gun “with a round in the chamber–ready to kill!!!!11!!!”

(Side note: John Guy is now a Florida judge. No, I’m not kidding.)

Well, of course Zimmerman had a round chambered. Only an idiot would carry a gun for personal protection and not have a round chambered.  A defensive handgun is often needed for instant defense, as was the case when Martin mounted Zimmerman and ruthlessly beat his head into a sidewalk.  Had Zimmerman needed to chamber a round before firing, he’d likely have died at the hands of his attacker. Thus carrying a defensive sidearm with a round chambered is both perfectly lawful and utterly sensible.

Tomorrow, February 26, marks the four year anniversary of the date on which Trayvon Martin made the foolish mistake of attempting to viciously beat an armed man, and lost his life in the effort. The trial that resulted was fraught with propaganda and lies, obfuscating what was to my modestly experienced eye the cleanest self-defense shooting I’ve ever seen brought to trial.

The four year anniversary, and yet the propaganda and lies just keep on coming.

Thanks for the explanations, and thanks for staying on top of this, Andrew.

Amazing what a little bit of knowledge, specifically the handgun in question, can do to utterly destroy a liar’s argument. Thank you Andrew for all you’ve done on this case and apparently still have to do.

“One Dark Night breaks new ground on multiple levels, including through audio carefully cleaned by forensic specialists Sourcesound and Primeau Productions, with the latter asserting that the reconstructed audio indicates George Zimmerman cocked his gun just before he gave chase.”

That’s just a lie, from all I can determine. They have a lot of self-promotion at their web-sites, but no “forensic” chops that I can find.

I missed the part where “Zimmerman gave chase”, too. Unless it was one of those meandering “chases” where a guy looks for someone via a slow amble.

All-in-all, that blub sounds like it was written by whoever writes the self-promoting BS on the respective web-sites of the mokes that produced that farce. I don’t doubt that it was.

Maybe they used the same “forensic audiologists” the state prosecutors failed to get certified as expert witnesses in the Zimmerman trial?

What a pair of loons those guys were. 🙂

Even at the time, I did’t think Judge Nelson got enough credit for keeping those eccentrics off the stand.

I give her credit for not being a complete moron who would allow “expert” testimony from those two clowns the prosecution came up with after hearing from the vastly more qualified experts the defense brought in to refute them. “This shall be!”, indeed.

“mokes” — I like that! Just the right connotations: low quality, donkey, deprecation, accuracy… Even rhymes, GOPes and Mokes.

I watched the ABC comedy Sitcom BLACKISH this week which featured an episode where the entire family felt they were under siege by all the shootings of blacks by police. I felt like prime time virtual reality along these lines.

They should have felt more “under siege” by the number of blacks killed by blacks.

But that fact doesn’t fit the narrative.

Thanks for continuing to get the truth to the public.

The Trayvon Martin story is being used to push a really phony narrative. They just won’t stop lying about it.
Throw in the big lie: Hands up don’t shoot. That police are the big threat to black male? Please! Just look at the FBI crime stats and you will see that other black male are the bigger threat. But facts do not matter today!

“Virtual reality” = complete fantasy that SJW’s have concocted out of thin air because the truth does not support the victimology narratives they are pushing to try and extort more money and power for themselves.

They keep lying and we keep telling the truth and which gains traction? Thirty years from now St. Skittles will be enshrined in AA and liberal culture. It doesn’t matter to them whether or not there’s truth to what they say. It’s all in the narrative to them.

This is the group that believes in ‘The Uprising’ and ‘The Plan’. How can you convince them that St. Skittles, ‘hands up don’t shoot’ and all the rest is BS?

You can’t. Which is sad because it tells me about ten percent of my country functionally lives in a constructed fantasy.

On a related topic. Any Floridians know how Angela Corey’s reelection campaign is going?

Most Republicans in her district (Jacksonville & Jax Beach, mainly) seem to be lining up to endorse her. Including the Sheriff and Mayor (both Republicans).

Wow! That is stunning.

Facts, truth have no more meaning.
What our idiots say/feel/imagine is all that matters.
Delusions now equal reality.

Are you saying that the all white Oscars is not proof Trayvon Martin was murdered in cold blood?

This whole Black Lives Matters and Social Justice Warrior movement is just a shakedown crime writ large. The feral, urban thugs are simply obeying the diktats from their elitist, race-bating bosses which, in turn, translate to more money pouring into the bosses pockets.

Trayvon Martin will be a major fundraising tool for the next 100 years.

You know I keep going back to Mr. Ron White when he says “You can’t fix stupid.”

“. . . asserting that the reconstructed audio indicates George Zimmerman cocked his gun just before he gave chase.”

Somebody help me out here. Was this before or after the dispatcher told George to stay in his vehicle?

Ask Trump. “Zimmerman is no angel,” Trump said. “I didn’t like the fact that Zimmerman was told to stay in his truck, don’t move, and he went out and he certainly moved.” Apparently our next president thinks we don’t have the right to exit our vehicles without government permission.

I guess Trump and Sunny Hostin go to the same school of “made up nonsense.” 🙂

It would be interesting to see a breakdown of how many black youth in Florida have been gunned down since that date, and what race their killer was. For all the rhetoric that “The Zimmerman case proves that white men can gun down blacks in cold blood in Florid and get off scot free!!!”, the fact of the matter is that a Zimmerman-type event is still the exception rather than the rule.

One thing that is not a lie is that Judge Debra Nelson’s dismissal of the Zimmerman libel case has been upheld be the Florida Fifth Circuit District Court of Appeal.

Why do you guys not want to mention that?

“Why do you guys not want to mention that?”

What do you expect me to say about it? The DCA simply recognized the long-standing practice in ALL jurisdictions that trial judges have tremendous discretion in making such calls.

When the state of Florida made Nelson a judge, they endowed her with that discretion, and she applied it as she willed. It’s not the job of the DCA to smash up regular trial practice.

The DCA upholding Nelson’s ruling to dismiss Zimmerman’s civil suit against NBC doesn’t mean they agree with the merits of that decision. It simply means they acknowledge the call was hers to make.

I’m surprised you can’t see that. This isn’t rocket science.

Just as an aside, she was popularly re-elected in November 2012 for another 6-year term. People like to complain about the likes of Angela Corey (also re-elected in 2012) or Deborah Nelson, but the fact of the matter is that there’s really no one to blame for these people being in the positions they’re in but ourselves. Everyone concentrates 99.9% of their zeal on talking about and studying and picking a Presidential candidate, but when it comes to the candidates further down on the ballot paper, tend to either vote party line or, in the case of judges, “retain.” Without really knowing anything about them.

Yet another reason why #ElectionsMatter.

“there’s really no one to blame for these people being in the positions they’re in but ourselves.”

Of course, that’s the collective “ourselves.” Doesn’t apply to us individuals. 🙂

Something else I noticed… The title of the SF Times piece is:

MURDER? So George Zimmerman is a murderer even though he was found not so by the court? Isn’t that straight-out libel?

Indeed. Should have caught that myself.

But so many lies, so little time. 🙂

I love it when liberals parade their beliefs about guns before the public and they’re shown to not only not true, but absolutely stupid. But do they FEEL stupid when called on their beliefs? OH, HELL NO…

The lesson here is “Never bring Skittles to a gunfight.”