File this story under “Only in California” 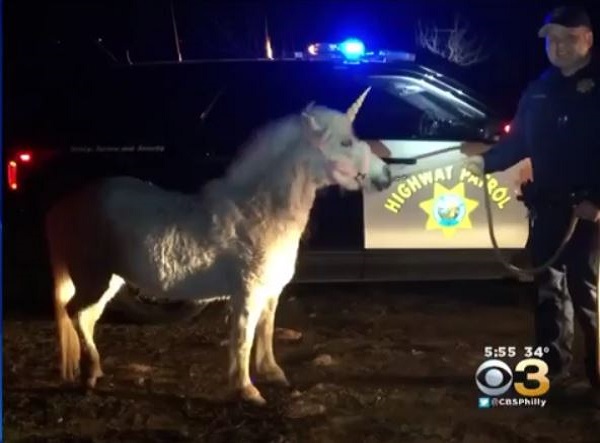 Juliet, a white Shetland pony with a prosthetic horn and a fuzzy pink bridle, bolted from a photo shoot and led CHP officers on a lengthy, if not enchanted, pursuit.

Juliet’s owner, Fresno photographer Sandra Boos, managed to corral the 20-year-old pony in relatively short order. However, the CHP grew concerned when they received another call at 5:30 p.m.: Juliet was loose again and headed toward Avenue 12, a busy traffic corridor between State Route 99 and State Route 41.

This time, “it was a little more difficult to capture the pony-slash-unicorn,” McConnell said.

It took officers three and half hours to round up the pony, using a helicopter with thermal imaging to track down Juliet in an orchard. Then, they needed to use one of the pony’s friends, a horse, to help bring her out of hiding.

The horse whinnied to Juliet, who whinnied back and then ran to her friend, Boos said.

No word on whether PETA is organizing a protest about the CHP’s treatment of the legendary beast.

Rumor has it that the California Assembly will be organizing a bill next week to get the unicorn placed on the endangered species list.

Given that President Obama unilaterally set-aside 1.8 million acres of California as “national monuments” geared to “permanently protecting key wildlife corridors and providing plants and animals with the space and elevation range that they will need in order to adapt to the impacts of climate change,” the unicorns should have plenty of room to roam.

That is, until they come across mountain lions!

When I was in my twenties, I lived in Monterey, CA. I went to a Safeway one night to get food for my apartment and turned onto the corner aisle where they had donuts.

There, standing in front of me in his uniform was a CHiPs looking over the donut selection.

By this time, he realized he was being watched and what obvious cliche had just occured.

He laughed and said that it was okay, he was off duty.

I Just laughed and said with a big grin on my face that I didn’t say anything, really I didn’t.

The only way to catch a unicorn is to be a virgin.

They’re in short supply in California and especially on the CHP.

I’m surprised they managed to catch it at all.

Strictly speaking, that’s what you have to be to ride the lil’ devil, not to catch it.

The arrest made Equestria Daily too. I guess ponies are everywhere 🙂

I hear that Stone Poney (sic) that kicked Governor Brown in the head was among the recipients of the National Medal of Arts and Humanities a year or two back.