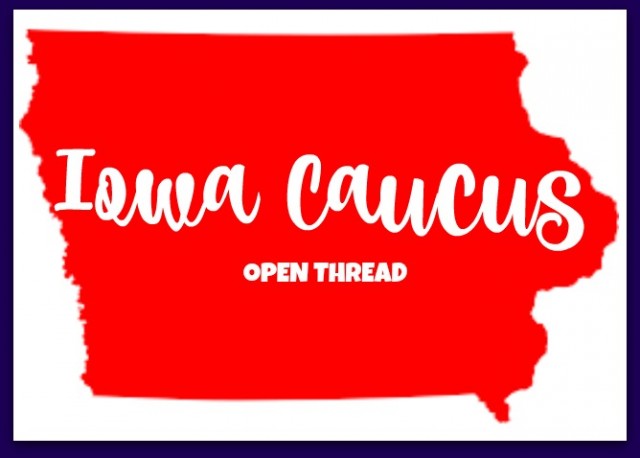 Welcome to our Iowa Caucus open thread. We’ll be updating periodically, so be sure to refresh your browser for the latest.

Caucus results will posted in a separate thread beginning at 8:00 PM ET, when the Caucus begins.

How does the Iowa Caucus work?

52 Democratic delegates and 30 Republican delegates. Caucuses are closed, so only registered Democrats can participate in Democratic caucuses, etc. Winner’s don’t necessarily go on to win the nomination, see also Huckabee in 2008 and Santorum in 2012. In the 2016 Republican field, perception and momentum are up for grabs.

GREAT question. No one knows. Seriously, no one knows. Why? Too many wild cards. At least for the Republicans. Mainly thanks to Trump who’s support base is so unpredictable. Anyone’s guess is as good as mine or yours.

A poll released by Quinnipiac today highlights why it’s so difficult to make any good determination, “today, 3 percent are undecided and 28 percent of those who name a candidate say they still might change their mind.”

Here’s Bernie Sanders in a low budget film from 1999

Because who am I to deprive you of such internet treasures?

What’s happening on the Republican side of the fence?

If polls are an indicator, Quinnipiac confirms what many others have indicated — only three Republican candidates are consistently breaking into double digits — Trump, Cruz, and Rubio.

Just as interesting — the stats for candidates caucus goers will not vote for:

Because you asked — the dumpster fire is back 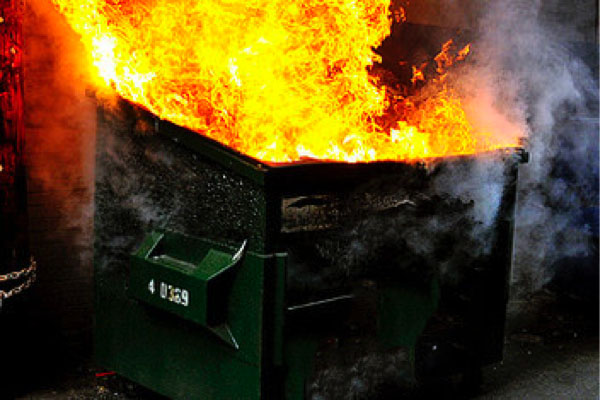 Polls have Sanders ahead of Clinton, but like Trump, Sanders is banking on the support of many first-time caucus-goers to pull off an upset.

In Iowa, it actually does all come down to turnout. A larger turnout should favor Sanders, who is banking on bringing younger voters who haven’t participated before in presidential elections to the caucuses. Smaller turnout will likely favor Hillary Clinton, who has concentrated on the more traditional, committed Democratic audience. How those two campaigns are able to get their backers to show up Monday will play the key role in determining how far the Democratic primary goes

In 2004, about 124,000 people showed up — with that year’s liberal insurgent, Howard Dean, particularly let down by the turnout, losing to John Kerry and never recovering. Four years later, in 2008, an intense three-way race and Barack Obama’s vaunted field operation nearly doubled that number, to 239,000 participants.

No one — not even Sanders himself — is forecasting turnout that high again.

But Sanders’ overwhelming advantage in polls among young people and first-time caucus-goers makes clear that the more people who participate, the better he’ll do.

Clinton’s campaign, however, is way ahead of the organization game.

Her hyper-organized campaign manager Robby Mook dispatched 30 paid staffers to Iowa last spring while Sanders was still little more than a protest candidate. By August, Clinton’s campaign had at least one supporter in each of Iowa’s 1,681 precincts.

The jump-start in recruiting an army of volunteers and “precinct captains” meant Clinton’s campaign could more quickly identify her supporters, make personal contacts, deliver door-hangers and help her backers find their caucus sites. That’s all particularly important in Iowa, where caucusing can be a three-hour, public affair that pits friends and neighbors against each other.

“It takes a lot of time and energy to get these people really engaged,” said Norm Sterzenbach, a strategist at GPS Impact and former Iowa Democratic Party executive director. “You need local volunteers to help you do this. You need Iowans to help explain this strategy and get people to do this.”

What’s it like to be in Iowa right now?

To start with, you’re inundated with wall to wall political ads:

If you sat in front of 5 TVs tuned to 5 networks on 1/28 in Des Moines, here's how bombarded you'd be with ads: pic.twitter.com/pU5ENKcoiE

Bill Clinton on HRC's chances in NH: "It depends on what happens in the next few days and how people react to unfolding events."

Um, well, I guess that’s one way to handle protesters?

Trump tells crowd to 'knock the hell' out of protestershttps://t.co/eEevssrurj pic.twitter.com/U0mDdY8AJT

Live inside a Republican Caucus:

And from a Democrat Caucus:

Self-updating and kind of the best thing in the world. Also wicked accurate.

Now… let the will of God and the people be done.

Corn ethanol will be spilt tonight.

I watched that video, the one explaining what caucuses are, not the Bernie Sanders one, ugh. So…

Should I be surprised ?

Kemberlee: Can we have another graphic of a dumpster fire?…or maybe an ethanol plant fire?

You are my heroine!

What?! No Ryan Gosling?

Recently Off the Tweeter Feed…

As if that would be a bad thing in the conservative voter majority’s eyes.

I wonder what percentage of that 25% would really do it? The quota-fillers? Or, the ones who actually produce whatever it is the agency, department, commission, bureau, or administration it is they are employed by?

There is always a slow exodus after a change of POTUS command, either voluntarily or otherwise. So there is some merit to it.

About as many as left when Bush won reelection – None.

I would dispute the “none” part but there isn’t much difference between a RINO and a Democrat, imo.

Poll: 25 percent of federal employees would quit under Trump presidency

About 1-in-4 federal employees would consider leaving their jobs if Donald Trump is elected president, according the results of a recent survey conducted by the Government Business Council.

Of those surveyed, 42 percent identified as Republicans, 31 percent as Democrats, while 8 percent said they did not know and 19 percent declined to state.

Among Democrats, more than half—56 percent—said they would support Barack Obama for a third term over the current crop of candidates in their party.

The poll was conducted Jan. 20-26, surveying 688 federal employees. The margin of error is plus or minus 4 percentage points.

In Marion, @tedcruz talks of a Supreme Court under @HillaryClinton. “That’s the consequence of getting it wrong at seven o’clock tonight.”!

Photo of a VERY packed Iowa church where @tedcruz is speaking. At capacity, Fire Marshal turning people away. pic.twitter.com/iUPIA7snAE

Well that’s good for Trump. His voters know how to caucus.

Shouldn’t be a big surprise, if you saw his mailers. Let’s just say he isn’t wasting time scaring voters with fake voting violations.

My Pre-Caucus Take from Iowa: “Trump & the Revenge of the Blue Collar Workers” lifezette.com/?p=100514 via @LifeZette

[email protected]: Like @realDonaldTrump or Not, He Projects Power and Gets Things Done bit.ly/1WYmfTa @TeamCavuto https://pic.twitter.com/CsluXjTDV6

“I came for the incisive political commentary; I stayed for the dumpster fires.”

Some devastating to Clinton tweets on the linked page. Wonder where the downvotes here are coming from.

I am at a Republican caucus on the east side of Des Moines, Democratic leaning blue collar area. There is huge turnout here

This is a @foxnewsalert: presidential candidates starting to arrive at #Iowa caucus sites -OTR #greta @FoxNews

Just a handful of precincts have reported — but @realDonaldTrump leads @tedcruz in Iowa. @marcorubio in 3rd http://pic.twitter.com/zhW4an4ZoP

Checking that decision desk link, something interesting came up.
Maybe it’s the way they count the votes, but at 10:55 PM it reports:

If those numbers are accurate, Dims are in trouble. Yay!

Good job, Kemberlee! We desperately all needed your sense of humor over the last week or so!