Investigators Looking for Links to ISIS in Ohio Machete Attack

Investigators Looking for Links to ISIS in Ohio Machete Attack

Uncertain if attacker mistakenly believed the owner to be Jewish 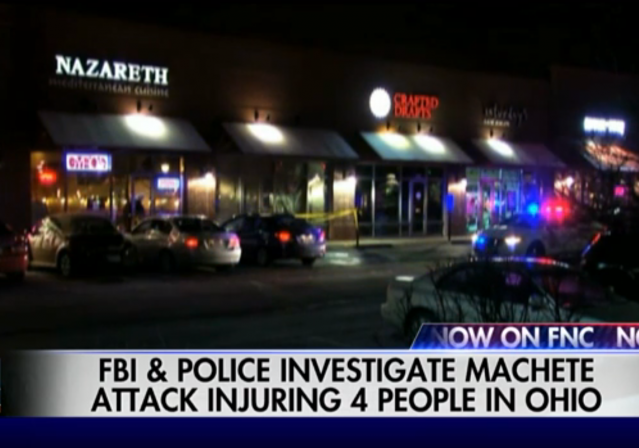 Yesterday, Kemberlee wrote about the brazen and bizarre machete attack that took place in Ohio.  Today, a few more details are emerging.

According to UPI, the FBI is investigating the incident as possibly ISIS-related.

Investigators said Mohamed Barry, 30, was listed in an FBI database after making radical comments about four years ago. The ongoing investigation is said to involve a look into Barry’s virtual footprint and a search of his home, with an eye on a possible link to a terror organization such as the Islamic State, also known as ISIS, ISIL and Daesh.

Additionally, there is further information about the background of the Israeli restaurant owner who came to America thirty years ago and opened his restaurant Nazareth.

CNN reports that investigators are trying to determine whether or not the attacker knew that the owner of the Middle Eastern restaurant was an Arab Christian.

His motive remains unclear, but investigators are trying to determine if the Nazareth Restaurant & Deli was chosen under the mistaken belief the restaurant had a Jewish owner, sources told CNN.

The owner told The Columbus Dispatch newspaper that the attacker came in half an hour before the incident and asked about him. The owner is an Israeli Christian-Arab.

According to the CNN report, the attack is also being investigated as “a possible hate crime.”

Mohammad Barry — no doubt named after his father Barack.