Anti-Israel divestment resolution watered down to include condemnation of the United States, other countries, and even Chicago. 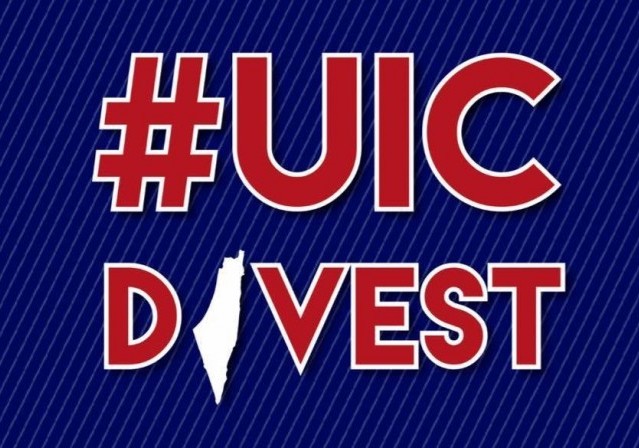 On Monday night, February 15, 2016, the student government council at the University of Illinois – Chicago unanimously (14-0) passed a divestment resolution proposed by Students for Justice in Palestine and a coalition of other student groups. That passage is being promoted by anti-Israel activists, including Jewish Voice for Peace, as a major victory for the Boycott, Divestment and Sanctions (BDS) campus movement.

But passage of the resolution isn’t the real story. The real story is that the resolution that passed did not single out Israel, and applied to any and all alleged human rights abuses anywhere in the world, specifically also mentioning the United States, China, Britain and other countries. As such, the watered-down resolution amounted to a universal statement of principles, not a condemnation of Israel.

The UIC Coalition for Peace, which included pro-Israel students, can claim this as a victory for fair treatment of Israel.

The Original Resolution Was Purely Anti-Israel

UIC is a hotbed of anti-Israel activity. As on almost every campus, SJP leads the way, with JVP serving as Jewish cover for BDS efforts. Various groups, operating under the name UIC Divest, were highly organized, with a professional website and used the now common tactic of “intersectionality” to bring minority groups against Israel.

There is no doubt that UIC Divest was completely and totally focused on singling out Israel in its BDS efforts. The UIC Divest website focused exclusively on Israel and alleged abuses towards Palestinians. 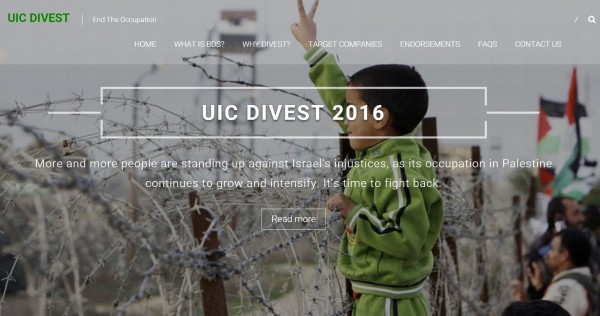 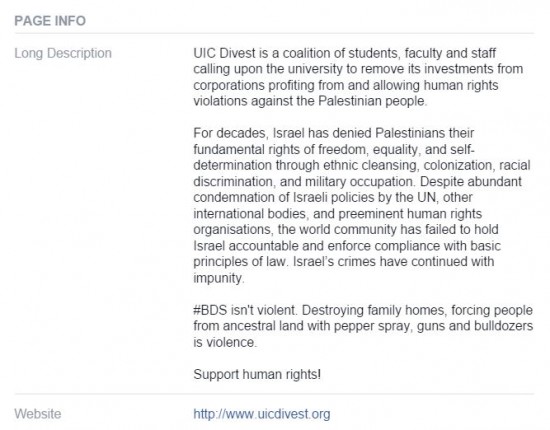 And last, but not least, the UIC Divest logo had a map of “Palestine,” eliminating Israel. [See Featured Image]

Based on sources familiar with the situation, the Initial Resolution met with strong resistance, as it was viewed as anti-Semitic for singling out Israel and Jewish Israelis whereas the UC Divest coalition members in other contexts expressed similar complaints about a long list of countries.

Israel clearly was singled out because it is a majority Jewish state identified with the Jewish People’s right of self-determination.

The UIC Coalition for Peace counter-petition focused on the discriminatory nature of  UIC Divest’s Initial Resolution:

Stop Hate and Discrimination at UIC

We, the undersigned students, alumni, and members of the University of Illinois at Chicago community, hold deep respect for diversity and abhor discrimination based on nationality. As such, we oppose the destructive boycott, divestment and sanctions (BDS) proposal that our Student Government will soon consider. The BDS movement does not promote peace between the Israeli and Palestinian people but instead promotes discrimination based simply on one’s nationality. This movement is not in line with the values of our distinguished university – in fact, it goes against everything we stand for.We believe in a future of peace, justice, mutual respect and cooperation for Palestinians, Israelis and all communities here on campus. We strongly encourage our Student Government to reject the boycott, divestment and sanctions movement and uphold the values of UIC. 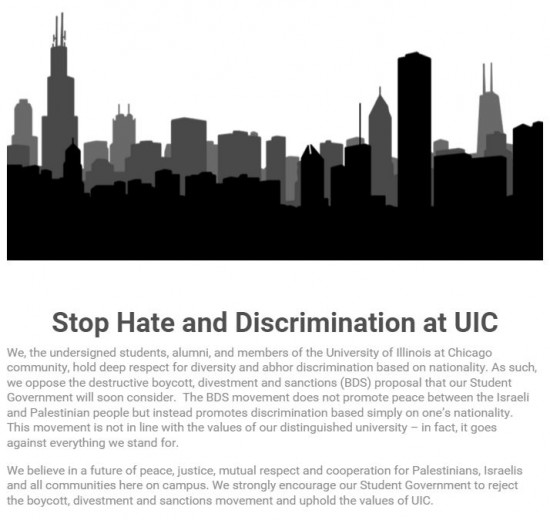 Concerns about anti-Jewish discrimination forced UIC Divest to negotiate with UIC Coalition for Peace as to the wording of the resolution to take away the stench of anti-Semitism. The language was significantly expanded to cover a wide range of countries and alleged human rights abuses, as quoted below.

The involvement of UIC Coalition for Peace in altering the original language was noted in the Facebook postings both the UIC Coalition and the student government after the vote was taken: 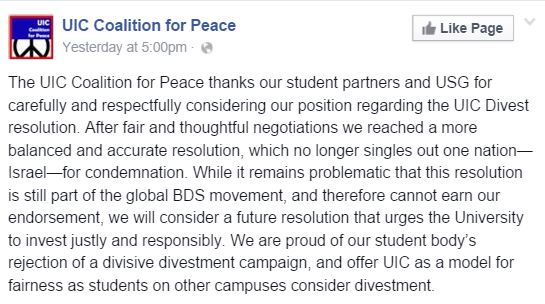 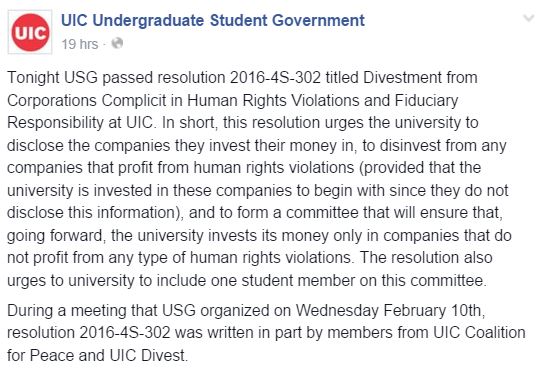 The Revised Resolution Did Not Single Out Israel

The Revised Resolution is embedded below. (Note: I’m told that there was one technical correction to account for a missing word, but that the version below is what was  presented for vote.)

These Whereas clauses demonstrates the breadth of territory and issues covered:

WHEREAS, G4S profits from the growth of private prisons and mass incarceration all over the world, has violated human rights in South African prisons where detainees are often subjected to torture with electroshock and forced injections, G4S is also complicit in immigrant-detainee labor, forcing immigrant detainees to work for as little as $1 per hour in the United Kingdom; and,

WHEREAS, Foxconn has some 1.2 million employees in China and even more worldwide including in Australia, Brazil, India, Japan, Mexico, South Korea, and Malaysia, and has been violating labor rights with atrocious working and living conditions, and poor working and overtime wages, Foxconn is not compliant in Chinese child labor laws employing children under the age of 16 years old; and,

WHEREAS, Caterpillar has violated human rights by continually providing engineering tools and bulldozers routinely used in the demolition of Palestinian homes, refugee camps, water cisterns, and agricultural fields in the West Bank and Gaza, and by providing bulldozers used to expand illegal settlements throughout the West Bank, and;

WHEREAS, Lockheed Martin, the worlds largest arms manufacturer, supplies the United States with F-16 fighter jets, Longbow Hellfire Missiles, and AH-64 Apache helicopter parts, which are the main weapons used in the assault on Syria, and;

WHEREAS, Elbit Systems provides security and surveillance equipment for the US-Mexico border, profiting off of the militarization of the borderlands, and;

WHERAS, Boeing and Lockheed Martin, as the worlds two largest arms manufacturers, profit from war and increased militarization all over the world, and;

That Israel was included in a divestment resolution was a concern to the end, but at least Israel was not singled out. That was viewed as a major victory on a campus known for anti-Israel activism, and on which the deck was viewed as stacked.

Students at University of Illinois at Chicago have reframed the divestment debate on their campus. The students, who oppose the boycott, divestment and sanctions movement, have negotiated a student government divestment resolution that now targets countries in addition to Israel….

Coalition for Peace unmasked the anti-Semitic aspects of the anti-Israel divestment campaign, which was cloaked under the guise of concern about human rights abuses generally….

After a process that students described as non-transparent and discriminatory, the Coalition for Peace made its case for fairness during a meeting of Undergraduate Student Government. During two hours of often hostile debate, the Coalition for Peace made the case that the divestment resolution, as written, was anti-Semitic and targeted Israel unfairly.

Concerned USG members invited the Coalition for Peace to sit with members of UIC Divest and USG to re-write the resolution. At a meeting during which BDS proponents and opponents reportedly negotiated fairly, the parties agreed to a new resolution.

“Negotiations over the resolution were not easy but we tempered it so that it does not single out one nation, Israel, for condemnation,” said Moshe Rubin, a student involved with UIC Coalition for Peace….

The Coalition for Peace no longer considers the new resolution anti-Semitic, and so will not oppose it. But the group will not endorse it either, remaining concerned that the resolution is still connected to the global BDS movement.

“I’m happy with the work we did to change the language of the resolution and I feel we accomplished what we set out to do,” said Coalition for Peace member Amitai Loew.

The victory for fairness to Israel at UIC could serve as a model to oppose distorted and discriminatory resolutions at other campuses where anti-Israel groups assert aggressive influence over student affairs.

Not surprisingly, anti-Israel groups declared a complete and total victory, without telling anyone that the original anti-Israel nature of the resolution was diluted through expansion to other nations and entities, including the United States and the City of Chicago.

Up to the minute of the vote, SJP was presenting the resolution as anti-Israel: 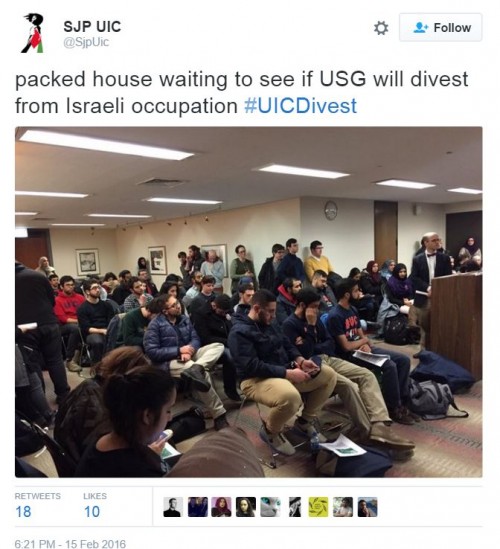 In its “victory” announcement UC Divest focused on Israel and only made passing and obscure reference to companies that don’t operate in Israel: 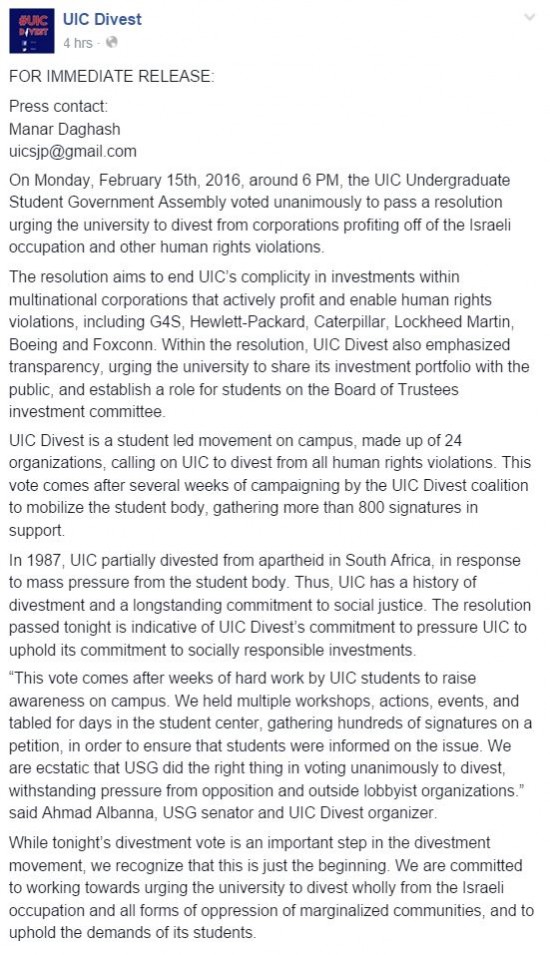 Jewish Voice for Peace congratulated UC Divest without mentioning the change in the resolution: 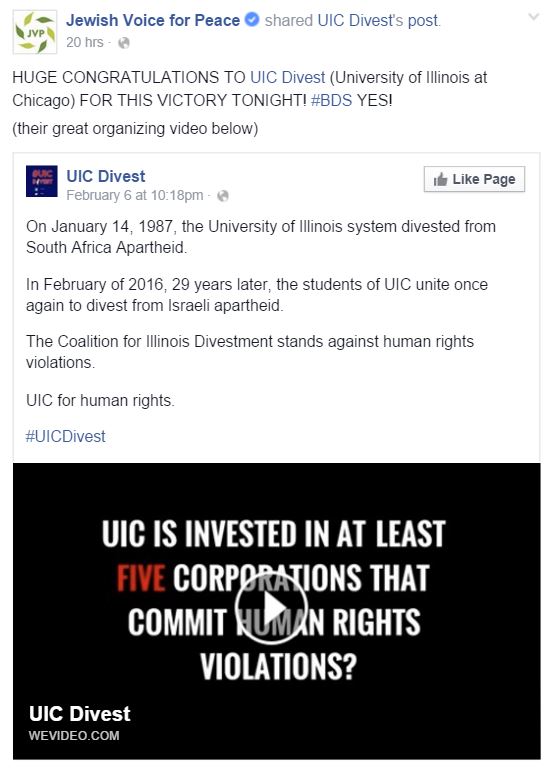 Ben Norton, an anti-Israel staff writer at Salon.com, celebrated the resolution as being against Israel: 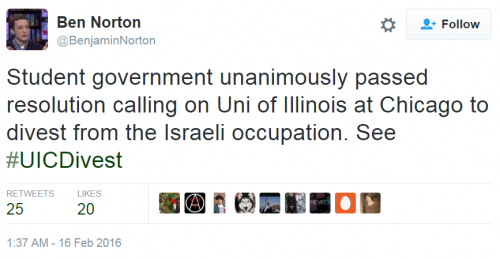 Other SJP chapters at other schools also celebrated, likely unaware of the changes made to the original resolution: 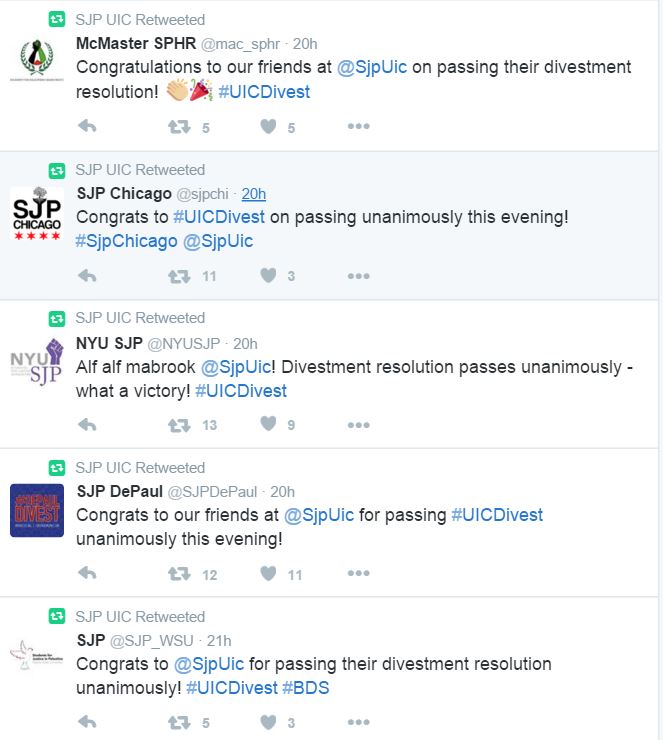 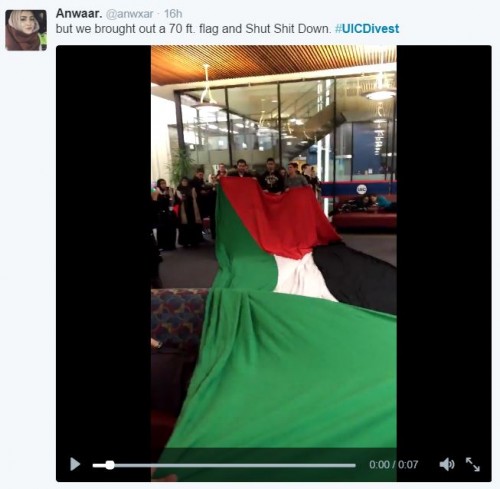 And students chanted for the destruction of Israel:

Model for Opposing BDS at other Campuses

As demonstrated above, the celebrations of the UIC divestment resolution passing are either ignorant of or deliberately conceal that SJP and its allies like JVP did not get what they wanted. They wanted Israel singled out, demonized and dehumanized. But that effort was recognized as discriminatory, and SJP was compelled to negotiate a watered-down, generalized statement which included Israel, but other countries and even the City of Chicago.

Considering that the deck was stacked against Israel, this has to be viewed as a victory and may serve as a model for opposing BDS at similar campuses where an outright defeat of any anti-Israel resolution is unlikely.

The divestment effort at UIC was purely symbolic. Student government, and indeed the administration, have no control over University investment strategy.

Nonetheless, symbolism matters. As demonstrated, anti-Israel activists declare victory even when they outright or effectively lose. And so long as they can single out and demonize Israel, they consider the effort worth it.

The Achilles Heel of the campus BDS movement is that they refuse to live by their own rules. If they believe in intersectionality, then they equally have to boycott their own universities and country.  They either have to expand their resolutions to the point of absurdity, or they have to be revealed for what they really are.

“WHEREAS, The University of Illinois at Chicago has been historically founded and is committed to principles of social justice, human rights and equality…”

Can’t someone just shake them by the scruff of their necks and tell them that frickin’ Utopia isn’t possible on Earth?

socialist justice warriors are Saul Alinsky followers, the resolution could have supported anything and they would lie about it

WHEREAS, Caterpillar has violated human rights by continually providing engineering tools and bulldozers routinely used in the demolition of Palestinian homes, refugee camps, water cisterns, and agricultural fields in the West Bank and Gaza, and by providing bulldozers used to expand illegal settlements throughout the West Bank,

This was written in Anwaar’s twitter bio, the young woman whose video was attached to the article: “let’s get together and dismantle the patriarchy sometime[.]”